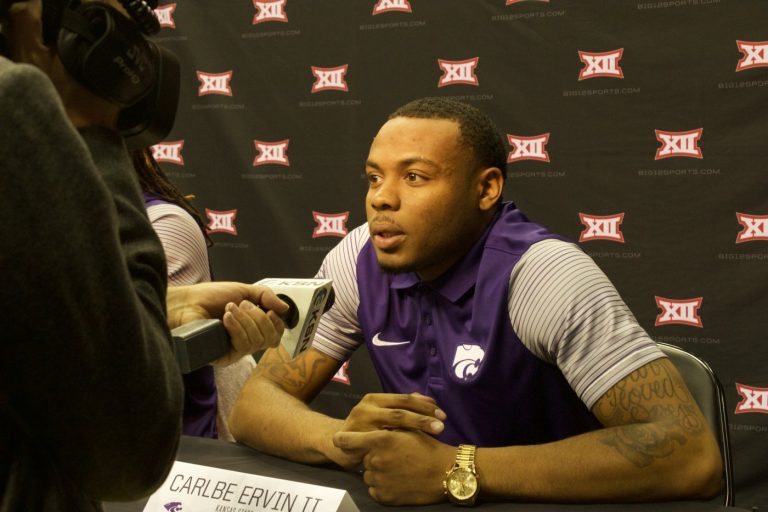 The Kansas Jayhawks haven’t lost back-to-back games since the 2012-13 season. That streak seemed to be in jeopardy early on Monday night, when the Kansas State Wildcats stormed out to an early 20-8 lead.

But the Jayhawks weathered the storm, eventually going on to win 74-71.

Much of Kansas State’s early lead came on the backs of Dean Wade and Kamau Stokes. Wade had a career high 20 points in the last meeting between these two teams in January; he matched that career high on Monday. Stokes finished with 16 points and 8 rebounds.

Kansas came storming back, thanks to some nice bench play from Carlton Bragg, who returned to the team after being suspended three games for a misdemeanor for drug paraphernalia. He had 6 points, 3 rebounds, and 2 assists.

The Kansas run continued when Frank Mason found his groove after a rocky start, and Kansas eventually took a 28-27 lead on a layup by Bragg off of a nifty pass by Devonte’ Graham. Mason, in what is now a routine thing for him to do, led all scorers with 21 points.

The Jayhawks took a 37-35 lead into the locker room, and when they started the second half on a 10-3 run, the game seemed all but over. However, the Wildcats started making a concerted effort to pound the ball inside to both Wade and DJ Johnson.

With Josh Jackson on the bench with foul trouble for much of the second half, the game stayed pretty close to even. With the game knotted at 63 and two-and-a-half minutes remaining, Svi Mykhailiuk hit a three to give Kansas the lead, and the game was iced by some free throws from Mason and Devonte’ Graham.

Despite the foul trouble, Josh Jackson still managed 18 points. Mykhailiuk had 8 points, and Graham had 10 while also chipping in 7 rebounds and 6 assists.

Carlton Bragg generally played pretty well in his return from suspension. He was everywhere in the first half, running the floor and going after every rebound and loose ball. He had a bit of a rough patch in the second, following up a missed layup with a goaltend. However, after he went to the locker room with a minor injury, he came back and looked alright. If he can give the Jayhawks just 10 solid minutes off the bench per game, that takes a lot of pressure off of the starters.

Speaking of pressure on the starters, Lagerald Vick’s play lately probably hasn’t taken much pressure off of them. After putting in 4 points on 2-7 tonight, Vick is now shooting 35 percent from the floor and 27 percent from deep in conference play. We’ve all seen Vick play at a much higher level than this, so part of me wonders if it’s mental. I’m not sure I understand exactly what his role is off of the bench. I’m not sure he or even Self knows what it is. Regardless, he needs to be better.

Coming into Monday’s game, Kansas was allowing almost 12 offensive rebounds per game in the conference season. They have been hovering near the bottom of the conference in that stat all season. It’s clear, at this point, that there really isn’t a fix to that problem, at least with Josh Jackson playing the four. They also continue to allow the opposing teams big men to have career nights. Dean Wade has scored 20 points just twice this season, both of which were against Kansas. Kansas fans are just going to have to hope they don’t run into North Carolina or Purdue in the tournament.

Frank Mason ended up turning the ball over here, but holy cow. This was incredible. Hustle play of the year:

Frank Mason emerges from the fourth row to make one of the best steals I've seen this season. pic.twitter.com/qydHYZP26s