Off the Mic : Krystal Oseguera 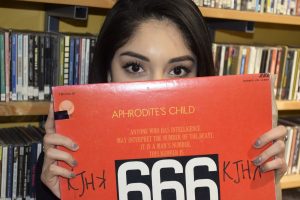 LD:  Do you have any hobbies?

KO: I don’t know, I wouldn’t say I have a hobby hobby. I watch a lot of Netflix. Right now, I’m watching Mr. Robot and Stranger Things because everyone is talking about it so I feel like I need to watch it. I’m also watching The Bachelor, no shame.

LD: I watch it socially.

LD: Have you been watching it since your childhood?

KO: I watched The Bachelorette last season with JoJo. That’s when I first watched it because everyone was talking about it and I wanted to see what it was all about. Now I’m hooked and I want to keep up. I also like to read when I have the chance. I really like tarot cards, so I read books about Tarot cards.

LD: Wait, what are Tarot cards?

KO: It’s a deck of cards and you use it… people think that your use them to tell the future but you don’t, they’re more like guidance for yourself.

LD: Wait, do you know enough to guide me?

KO: I don’t think so. I mainly just use them for myself. You use your own intuition to kind of read the cards to how they apply to your life. I do daily card readings on myself, so you’re kind of just like give the guidance I need for today and then you apply that to your life. So it’s not like it’s going to tell you what’s going to happen… you interpret it however it applies to you. 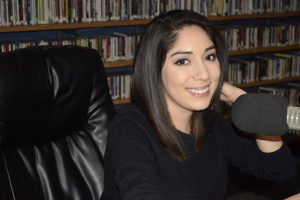 LD: Where would I buy these cards?

KO: You’re supposed to have them gifted to you but I just bought them on Amazon, because you’re supposed to pick a deck you connect with like with the artwork because it’s very visual. I just bought the original Tarot deck. I have tarot books that tell you how to interpret cards and what they mean. It’s very interesting, so yeah I guess I could consider that my hobby. I used to be really into knitting, but then I got really frustrated and stopped doing that real quick.

LD: Were you just trying out new techniques?

KO: Well, I know there’s different stitches in knitting and I learned one stitch and then I tried to move on to another stitch and I was done. I got over it. I still have the needles though if I get into it again.

LD:  How did you hear about KJHK?

KO: It was my freshman year when we first started school at the club fair they make all the freshman go to by the parking lot behind the Spencer Museum. That’s when I first saw KJHK’s table but I didn’t want to seem too eager so I was like “Hey… yeah I guess I can give you my email”. Then I went to the first meeting and the rest is history.

LD: Why did you choose to get involved?

KO: There’s actually a pretty long story but I’ll try to condense it. My senior year in high school we had to do a senior project and we had to job shadow someone in the field that we want to work in for a day and then write a presentation about it and stuff and I didn’t know what I wanted to do with my life. So I decided to job shadow a DJ at this really famous radio station that everyone listens to in San Diego (91X) just because I thought it’d be really cool and all my friends would be like “oh that’s so cool you went to this radio station” so I went and visited them and ended up loving the vibe. I’d always been interested in music but that’s when it sparked and I realized it was like a thing that you could do. 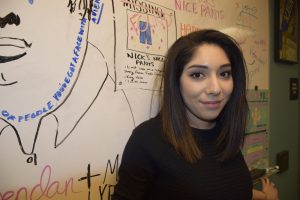 LD: Is that the station you grew up listening to?

KO: Oh yeah, everyone in San Diego listens to it. They are the alternative station over there so they are really similar to KJ actually.

LD: Do you want a job in a radio station in the future?

KO: I don’t know if I’d want a job there necessarily but I think from working in radio I realized I’m interested in like promotions marketing and social media. Anything in the music industry but in a communications sense.

LD: Earlier we mentioned that you host Local Block on Thursdays. What other shows have you hosted?

KO: My very first shift was Saturdays from 6-9 in the morning. That was my sophomore year I think and it was terrible. I had to wake up at like 5 in the morning on a Saturday so if I wanted to go out Friday, it was not happening. I had to wake up so early like the sun wasn’t even out yet and I was already at the station. Then after that, I did Punk Rock Steady on Sundays 4-6pm and I quickly realized I didn’t know as much about punk rock as I thought I knew.

LD: What kinds of things have you learned or realized about yourself because of KJ? 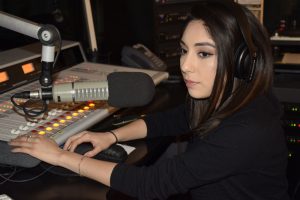 LD: Through working here you sometimes meet artists and people. Who have you met that stood out to you?

KO: I met Twenty-One Pilots because I tabled their show. That was my freshman year.  I met B.O.B. and I also met the guitar player from The Strokes, Nick Valensi. I also saw Allison Wonderland. I didn’t actually meet her but I was a few feet away.

LD: What have been some of your favorite memories spinning here at KJHK?

KO: I think just tabling events, in general, is really fun. Also, being a part of Farmer’s Ball every year. It’s a KJHK tradition so it’s really great being a part of that, helping put it together, and picking the bands. The people I’ve met are all great. I don’t know what my college experience would be if I wasn’t in KJ. 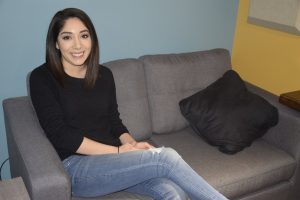 LD: What would be the title of your autobiography?

KO: It would probably be “Pop-Punk, Pizza, and Wine.” Because I think that’s my aesthetic. I really identify with my sixteen-year-old self. That was my favorite music era, like sappy pop-punk. I love pop-punk.

LD: What are your favorite pop punk bands?

KO: How do I answer that question? I love so many. Is Mayday Parade pop-punk? They were my favorites like middle school and high school but I mean A Day to Remember will always be my love. I really like Neck Deep and the Story So Far even though Parker Cannon is a mean person. I also really like Man Overboard. Oh, and how could I forget State Champs. They opened for All Time Low the last time I saw them and it was really good.

LD: Besides pop-I also know you like to go to festivals? Can you tell me more about that?

KO: I really like EDM festivals, I’ve never been to any other kind of festival. My first quote “rave” was a called Scream in San Diego. Everyone was a rave scene kid and went to these raves. That’s when I got into EDM. The only big festival I’ve gone to is EDC which is funny because I feel like I skipped to the biggest one. I went to EDC in 2015, 2016 and I’m going this year for 2017. It’s so expensive but it’s worth every penny. People just care about you even if they don’t know you and they’re very open no matter where you come from or where you are.

LD: Tell me about yourself and your family?

KO: Well, I am from San Diego. I am super Mexican. My mom is from Mazatlán and my dad is from Tijuana. I think, don’t quote me on that (*proceeds to literally quote her on that*).

LD: What is the strangest habit you have formed over the course of your life?

KO: That’s kind of weird. I don’t know, I like to think I’m a pretty boring person. Which is fine with me. You should tell people about my leopard gecko.

LD: You have a leopard gecko? 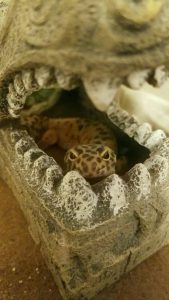 KO: I have a gecko named Zeke. She is my sweet sweet child. She’s adorable. I got her my senior year in high school. My mom hated my brother and me for getting her.

LD: Did you guys have a plan to get her?

KO: No! It was so on a whim. We went to PetCo just because we were bored.

LD: Was it really expensive?

KO: No really. I don’t remember how much but high school me was able to pay for it so it must not have been that bad. I love her so much. She’s so sweet. Poor thing, I had to drive her back from California in a car for two days. I don’t think she was very happy with me but yeah I love her she’s great. I also didn’t realize how much of a commitment leopard geckos are; they live until they’re like 20 years old but I love her. She’s so cute.

LD: What is your favorite childhood cartoon?

KO: I really liked CatDog. I was also a big fan of Blue’s Clues and Spongebob obviously. I was always a Disney channel person not really a Cartoon Network person. Nickelodeon was my sh*t.

LD: Do you have a hunch about how you will die?

KO: I have this weird thing where I think about ways that you can die but in my everyday life. So, I’ll be walking up some stairs and be like “Aw man, if I trip right now I could totally smack my face and die.” I think about that stuff all the time. Or if I’m walking with scissors I’m like “Oh, what if I fell right now and stabbed myself with these scissors.” So I don’t really think about how I’m going to die but I think of ways that people could die.

KO: Well, my favorite color is teal. But it’s a very specific shade of teal. Not too dark. Not too blue. Not too green. Just right. Like real teal. 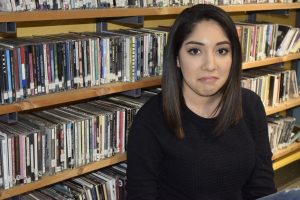 KO: Yeah, not quite aqua or turquoise, that’s too blue. A little more green. Like that teal, when you see it it’s like “Ooh! That is a nice shade of teal”.

KO: I think when I look at it, it’s very calming and soothing. Like yes, this is the right color. I also really like black. I like only wear black. I feel the most comfortable in it.

LD: What song would you say describes you as a person or explains what you’re like?

KO: Well there’s a lot of really sad Mayday Parade songs I could say, but I’m not going to. You Make my Dreams by Hall and Oats. That’s like my all time favorite song. Just because every time I listen to it puts me in a good mood no matter what. I kind of save it for when I need something to pick me up. It just gets me every time. Change Your Mind by The Killers is my second favorite song and then anything by Elton John.

LD: Anything else you want to say or answer that I didn’t ask.

KO: I love my lizard so much I want to get her tattooed on me. I love her so much. I also want to get tarot card tattoo btu I’m still trying to find which card I want. Right now, I’m leaning more toward the wheel of fortune which stands for changing times kind of like the quote “this too will pass’ if you’re feeling down.