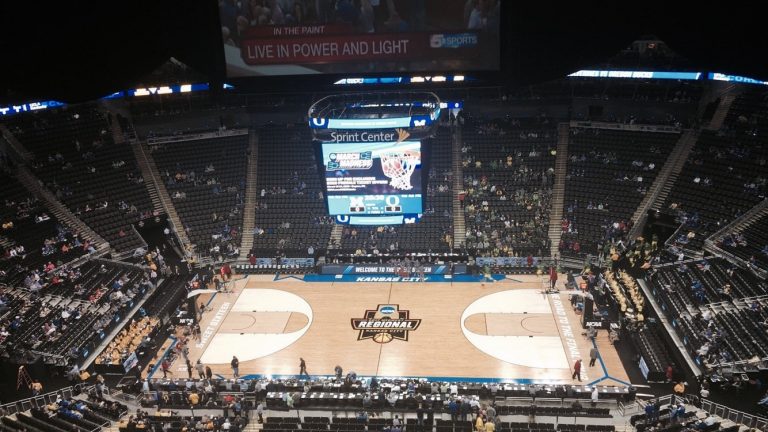 KANSAS CITY, MO– The Jayhawks win over the Boilermakers was a tale of two halves. Of course, the Purdue “winning” first half was still advantage Kansas.

Despite the friendly crowd at the Sprint Center, Graham said the team took a little while to get comfortable.

“We were real anxious and they had us on our heels,” Graham said. “They were making shots early and I think under maybe like the 10-minute mark or so we started loosening up and getting into a rhythm.”

Any time Kansas looked tight early, Mason would come up with a bucket, getting a score after three different 4-0 runs by the Boilermakers in the first half. The Naismith National Player of the Year finalist also added seven assists and seven rebounds to his statline.

Bill Self described his team as spoiled to have two point guards of Mason and Graham’s caliber.

“To have guys out there playing like they’re playing. I think just gives everybody confidence and it can help totally control the pace of the game,” Self said.

Purdue’s own Naismith finalist, sophomore forward Caleb Swanigan, finished with 18 points, seven rebounds and four assists. He also committed six turnovers as the Jayhawks keyed in on him. Swanigan did a good job facilitating the Purdue offense early, leading to the team shooting 6-for-13 from beyond the arc in the first half.

Purdue head coach Matt Painter was disappointed with his team’s 47-40 deficit after a strong first half.

“We felt like we should have been in a better spot going into halftime,” Painter said. “I thought we had some opportunities in the first half that we kind of let squander away from us.”

The Boilermakers cooled off, hitting only 28 percent from three in the second half. Senior center Landen Lucas got in foul trouble right out of halftime, but Purdue was unable to take advantage.

“Obviously, Dwight bought us a ton of minutes whenever Landen was in foul trouble, but I thought Carlton came in and did a good job, too,” Self said. “You add those guys together you get 23 key minutes out of that position when Landen can’t be in the game. So I think they both kind of bailed us out.”

Freshman guard Josh Jackson had a rough start, but still finished with 15 points, 12 rebounds, and four steals. His athletic dunks got the Jayhawk crowd rocking on multiple occasions.

Sophomore guard Lagerald Vick finished with 12 points. His most exciting play was a deflection that should have gone out of bounds before bouncing off the referee, and then back to Vick. He passed ahead to Graham only to get the ball back on an alley-oop flush, giving the Jayhawks a 7-point lead heading into halftime.

Junior guard Svi Mykhailiuk scored 10 points off three 3-pointers, including a dagger to give the Jayhawks their first lead, 36-35 with 4:36 left in the first half.

Kansas has scored 90-plus in each of its three tournament games so far.

The Jayhawks have earned their way to a Elite 8 matchup with the Oregon Ducks. The Ducks held off the Michigan Wolverines, 69-68 earlier in the night.

KU-Oregon tips off at 7:45 on Saturday at the Sprint Center.