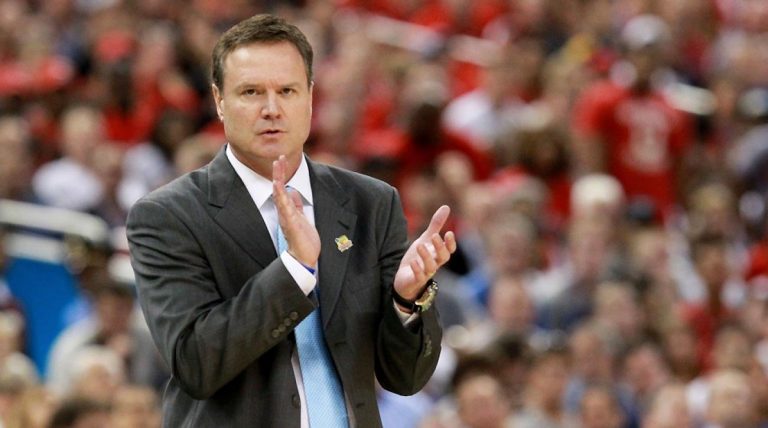 KJHK’s favorite March moments in the Bill Self era

This one’s easy for me. The 2008 Final Four against North Carolina, the first meeting between Kansas and Roy Williams since he left the program. It seemed like there was pent up frustration towards UNC. They absolutely destroyed North Carolina for the full 40 minutes. At one point, there was a stat that flashed showing Brandon Rush with 12 points. North Carolina and Brandon Rush were tied at 12. But Kansas was up by 28. Still, to this day, it is the most fantastic March Madness memory I have of the Bill Self era. – Jackson Schneider 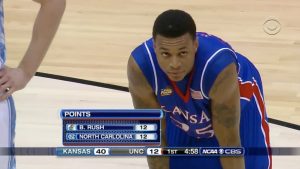 Kansas vs. Memphis: 75-68 victory in the 2008 National Championship Game

Kansas Basketball fans take for granted the remarkable consistency of Bill Self and his ability to recruit perennially excellent groups of talented young athletes. While most programs can only refer to a handful of March Madness memories, Jayhawk fans can indulge in multiple “top-10” highlight videos from any given year. The fact that we are able to debate about which moment may be the fan-favorite or the best is a testament to the wealth of joy that Jayhawk Basketball provides.

Having been born and raised in Kansas, I remember well the title run of 2008 and the penultimate moment that became known as “Mario’s Miracle”. It was the biggest shot in the history of Kansas Basketball. Talk all you want about Villanova and Jenkins at the buzzer, there’s a big difference between launching up a prayer with the game tied, and pulling up in the biggest moment needing all of the three points just to survive.

The Jayhawks capitalized on every Memphis mishap and mistake in the final minutes of the 2008 season in the Alamodome. It was a classic showcase of Kansas grit, yet it still seemed insufficient. Thirteen years old and emotional from a combination of puberty and big-game stress, I slowly approached the television as Sherron Collins brought the ball across midcourt. My hand instinctively reached for the remote, I couldn’t bear seeing my team go down. Collins shoveled the ball to Chalmers, my finger resting on the power button. Then he hit it. – Sam Davis

As great as the win over North Carolina was in the 2008 Final Four, my choice would be the win over UNC in the 2012 Elite Eight. There was something special about the 2011-12 team, a squad that certainly wasn’t the most-talented one under Bill Self, but absolutely showed as much heart as any other team. On a personal level, I have an intense hatred of North Carolina basketball after they beat Illinois in the 2005 National Championship Game, so getting the chance to see them lose to Kansas again late in the tournament was magical. Every starter for the Jayhawks finished with double-digit point totals in that game, and each player’s contribution meant something special against a very talented Tar Heels team. Any win over Roy Williams and North Carolina is wonderful, but watching that specific Kansas roster knock them off in the Elite Eight is a special memory. – Brendan Dzwierzynski

I’m going to go with kind of a weird one here, but I have always thought that the 2nd round game against Dayton in 2009 was really cool. Kansas, a 3-seed after losing their entire starting five from the previous year’s championship team, was matched up against the 11-seeded Flyers. In what can only be described as pure dominance, the Jayhawks held Dayton to just 16-72 shooting from the field. That is 22%. Much of that effort, and the fact that Kansas surrendered just 43 points for the entire game, can be credited to the work of Cole Adrich. The sophomore big man had 13 points, 20 rebounds, and 10 blocks. Yup, a triple-double with blocks. This performance goes way under the radar in Bill Self era tournament moments. -Nick Lewis 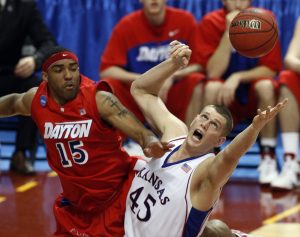