Off the Mic: Sophie Johnson 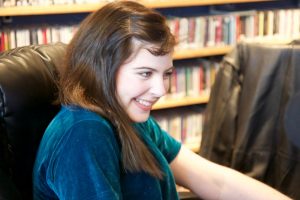 Lily Grant: When and why did you join KJHK?

Sophie Johnson: I was at Java Break and on a whim I was like, “I need to be more social at KU, I don’t really do anything.” Then I was like “Oh, music’s cool. Being a DJ would be cool.” So I just randomly applied and they called me with a lot of openings that I could be part of so I did two of them because I’m part-time at KU. I know that Jazz in the Morning is a big thing that a lot of people listen to and I thought it would be cool to do that and explore jazz more, because I didn’t really listen to it before this.

SJ: Yeah, now it’s a huge part of my life! I have to listen to so much jazz to create these playlists. It’s been a really positive thing. I didn’t realize how music could influence my life the way it did. 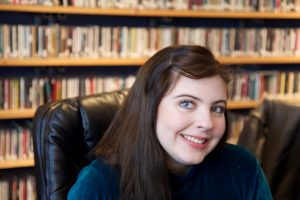 LG: What was your first impression of KJHK when you joined?

SJ: Super scary! It was so much. Everything is high-tech and there’s a lot of buttons. Turns out, you don’t have to press like any of the buttons except one. It all went over my head when the programming director explained it, I thought, “I’m going to forget all of this”.

LG: I thought the same thing.

SJ: It was a rocky start, because I slept through twenty minutes of it.

SJ: Yeah. I freaked out and I thought I was going to make KJHK lose their license because we weren’t going to be on air, but it was fine. The playlist kept going and I’m sure not many people were listening at 6 a.m.

LG: Why do you think being a KJHK DJ is important?

SJ: Oh man! It super connects you to the community. I didn’t know it would, but when I mention to people that I do Jazz in the Morning for KJHK, they’re like, “Oh wow! That’s cool! I also listen to jazz!” I’d always thought of jazz as a kind of, um… old person thing to listen to.

SJ: It turns out, a lot of people listen to it, and it’s fun to get suggestions from others and make connections that way. And people actually recognize my voice from the show, which is so cool. Being shy and anti-social, it’s great, because I can just sit back here and not talk to anyone, yet still be out in the open.

LG: What would the name of your debut album be?

LG: What kind of music would it be?

SJ: It would be super funky! Or just straight up 80s music.

LG: What’s your favorite song at the moment?

SJ: This sounds really weird, but it’s probably “Don’t You Want Me” by The Human League, like the 80s song. I could be in the worst mood ever, listen to that song, and then I’m alright! 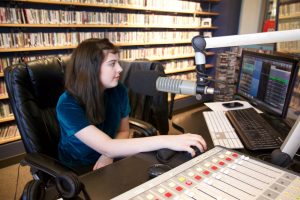 SJ: The Epic by Kamazi Washington. There’s a lot of diversity and songs with vocals, like “Cherokee.”

LG: What is a song that you’re embarrassed to like, but secretly jam out to in your car or shower?

SJ: Oh my god it’s totally the Aly & AJ “Potential Breakup Song.” I’m so into it, I could listen to that on repeat forever. My life is literally chock-full of boy drama, so why would I not listen to that?

LG: Why are you majoring in art education?

SJ: Being around kids gives me so much energy in a good way. I just see these young innocent minds and it’s just so beautiful and pure to be around. Being able to impact kids’ lives and show them how art can be a form of expression for them and impact their lives would be really important and meaningful. I want to do art with kids that affects the community.

LG: What are some words you live by?

SJ: This year I’ve realized that there’s nothing that time doesn’t heal. Time can seem to go by slowly, but it actually goes by super fast and then I’m not even thinking about it anymore and I really can move on from most things. That’s an important lesson that I’ve learned.