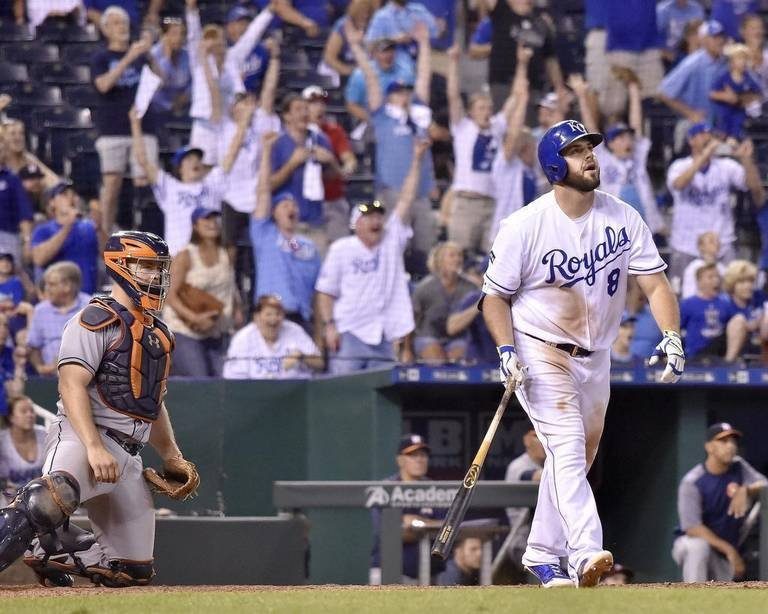 KC is 4.5 games back of first place in the AL Central and have already claimed two games in a four game set with the best team in baseball, so let’s pump the breaks on the fire sale talk, just for a bit.

Let’s go back to that first win against Houston. Down 7-1 in the fourth inning, the Royals did something they had yet to do this season, use their offense to come back from a large deficit and win. Mike Moustakas’ walk-off two-run bomb helped the Royals steal that game, and made me flash back to the 2015 playoffs.

The Royals kept the line moving, they made big plays when it counted most, and most importantly, they won a game they should not have won. That’s a key for any team trying to create momentum or have success. You have to find ways to win with the odds stacked against you, and that’s exactly what Kansas City did for the first time in quite a while on Tuesday.

The magic surrounding that win was palpable, and Royals fans haven’t felt that way in almost two years now, but hey, maybe that comeback win was just the first taste of the magic that could be on its way this season.

One step beyond that win, the Royals managed to follow it up with a win on Wednesday, and let’s face it, when you’re below .500 you have to manage to win a couple in a row every once in a while to have any hopes of righting the ship.

Considering the circumstances heading into this series, I already think taking two from the MLB’s top team is a success. If KC can manage to take the series with 3 out of 4, they put themselves in great shape to make a run towards the top of the AL Central next week.

After finishing up the series with Houston, the Royals head west for 9 road games against teams with losing records. Three with the Padres, two against San Francisco, and four against the Angels, who the Royals swept back in April.

Those nine games are monumental for our boys in blue. A winning road trip would be nice, and I think it should be expected, but if the Royals really want to crack into this deficit they face in the division, they’re going to need to get 6 or 7 on their Cali trip.

Call me an optimist, but I think it’s entirely possible for the seemingly down Royals to get back in the conversation with help from this upcoming stretch.

How dare I even entertain the thought of this team being a division contender, right?

Well, let’s just take a peak at the division standings as of 5:30pm CDT on June 8th.

If that’s not an open division, I don’t know what is. As bad as the Royals have played through their first 58 games, they’re still very much alive in the division, thanks to the rest of the Central’s squads struggling just as much as the Royals.

Back on the subject of this upcoming road trip.

The Royals were, at one point, last in the MLB in team batting average. They have picked up their game of late, moving into 25th in the MLB (.238). I know what you’re thinking, and I’ll admit, it’s still not good, but ALL THREE teams KC will face in the next nine games are behind the Royals in batting average.

Let’s face it, the Royals’ starting rotation has struggled this year, and they’ve been bitten by the injury bug to boot, but if there were ever a stretch to get things back on track and build some confidence, it would be now.

I’m not going to sit here and promise you another World Series appearance, or even a playoff spot for that matter. What I can promise you is there are still over 100 games left on the calendar, and the Royals are within five games of first, with a favorable schedule coming their way. So with all that in mind, let’s all just put the trade talks away until we have a real reason for a fire sale.