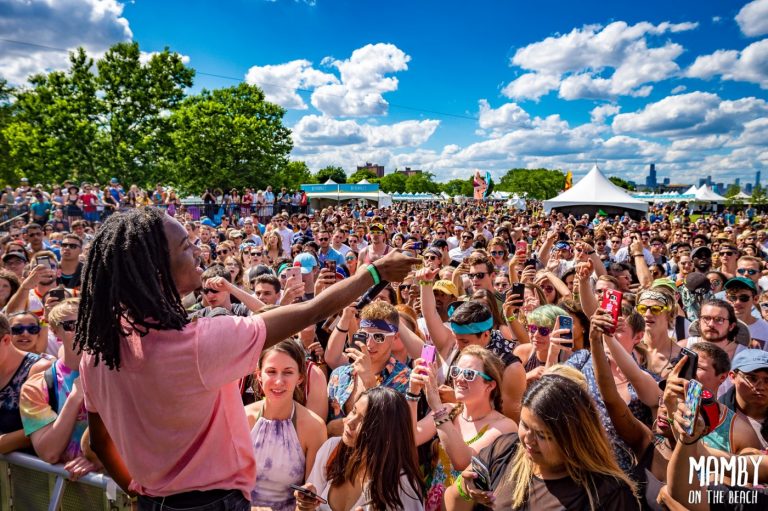 Beaches, blue skies, and bangers: Mamby on the Beach 2017 Review

I’ve learned a lot in my 22 years on this earth. I’ve traveled the world in chase of excitement and enlightenment. I’ve seen things that have changed my worldview forever. All that said, as I write this, I know this: few things are better than the 3 B’s: beaches, beer, and beats.

On June 24 and 25, Mamby on the Beach took place in Chicago. Taking place on Oakwood Beach, the combination of stellar music, phenomenal weather, and breathtaking scenery made for an absolutely incredible festival.

Entering the festival is like being transported to paradise. Enormous wooden teepee-like structures guide you toward a colorful and tranquil area where yoga, henna tattooing, and glitter dispensing takes place. It is here that white girls thrived. Just past there, you find yourself on a beach,the gorgeous turquoise blue Lake Michigan to your left, and a stage featuring some of the coolest names in music performing through the day and into the night.

One of the early standouts of the first day of fun was Quinn XCII- a unique rapper with ultra-catchy production and heavily relatable rhymes. His easily danceable music moved the crowd to move their feet early and often. With such good vibes to start the day off, things could only get better, and they did.

Over on the Park stage, SHAED sauntered through their sultry electronic-pop to high acclaim from the excited crowd. Vocalist Chelsea Lee won every heart in the crowd with her stellar voice, while twin brothers Max and Spencer Ernst laid down twinkling and equally hard hitting electro-pop beats. Together, they have a phenomenal sound that is definitely going to take them far. Let this Mamby performance be a warning to the rest of the music industry.

Speaking of artists with infinite possibility, Chicago’s own young-up-and-coming rapper Saba came to spit bars and chew bubblegum, but he was all out of bubblegum. That is to say that he slayed his mid-day slot. Performing his high octane hip-hop with effervescent joy on his face made the bright summer day infinitely brighter. This kid has HITS on deck. “Monday to Monday,” “Stoney,” and “Westside Bound 3” set the crowd off, and Saba rode the energy. It was pretty awesome to see the crowd lose their minds to fellow Chicagoan Chance the Rapper’s collab “Angels.” Watch out for this dude.

Marian Hill, riding the wave off their biggest song to date, “Down,” crushed their Beach Stage slot, by doing something so awesome, I can’t give them props enough. They played “Down” FIRST. Right off the bat, they strode onto the stage, picked up instruments, and played the song everyone wanted to hear first. The song is so good, and the group (it’s not just Marian) just rode the wave and continued hitting the crowd with more awesome jams than they knew what to do with.

As the day turned to night, the more firmly established acts took stage and amazed the crowds. Local Natives, known for their anthemic and euphoric indie-rock music powered through an irresistible set of old hits and newer jams off their latest album, “Sunlit Youth.” These guys always deliver a hell of a show, and this Mamby on the Beach performance was no exception. They consistently make their songs sound larger than life as they play them.

Day 2 began with just as incredible of a start as Day 1. The exciting and fresh sounding MUNA let loose their catchy indie-rock on the beach. These girls know how to rock and do it in an empowering and deeply profound way. There were parts of their set that made me think, “Wow, these girls can take over the world of indie rock, like HAIM or CHVRCHES did.” They are so good, and with a great message to go along with stellar music, I can only hope for more music, cause I’ll for sure be listening.

Next, electro-rock weirdos STRFKR took the stage clad entirely in NASA spacesuits and made the entire crowd dance. Not to mention they brought inflatable pool toys like a giant banana and a raft that looked like a hot dog with them to throw into the crowd. Here’s something I caught during their set, a girl riding the hot dog raft fall about eight feet onto the (thankfully) sandy ground, as well as a spaceman riding an inflatable swan, batting beach balls into the crowd. Needless to say, seeing STRFKR is a spectacle that goes hand and hand with their catchy-as-hell music.

Next up was performer of the day Thundercat over on the Park Stage. Whenever I see Thundercat, I have to advise the people around me to please prepare themselves to have their minds blown. This performance, riding off his superb new record “Drunk”, absolutely blew minds. It blew mine about a dozen times at least. Cat laying down the funkiest, most intricate bass-lines on his special six-string bass, and his band mates jammed out and left everybody in the crowd in pure amazement. Jaw dropping, head scratching, amazement. If this guy is touring in your city, RUN TO SEE HIM. You’ll thank me later, like the Drake album.

Finally, headliners Flying Lotus and Walk the Moon each received 50% of my time. The first half started with FlyLo, who was accompanied by the trippiest visuals I’ve ever seen in a show. Thanks to two projectors and a screen in front of his booth, he laid down the nastiest, hardest hitting beats I’ve ever heard. These songs crush speakers and demolish eardrums. It was exhilarating to turn the fuck up to them. By the time Fly Lo took on his Captain Murphy alter-ego, the crowd was jamming out and in a trance of his light show.

To close out the festival, it was only right for me to be on the beach dancing and jumping around to Walk the Moon, the Ohio indie-rock outfit that is back on the road after a tour cancellation last year. I have some advice to the festival promoters out there, BOOK WALK THE MOON FOR YOUR FESTIVAL. These guys not only have a dedicated fan base, but their songs pair perfectly with warm weather and carefree attitudes- both of which thrive at festivals. With incredible energy, WTM crushed through songs like “I Can Lift a Car” and “Shut Up and Dance” before killing their earth-conquering hit “Anna Sun.” If you haven’t danced on the beach with countless friends and strangers alike as Walk the Moon plays and fireworks light up the sky, you haven’t lived yet.

All and all, I will be in attendance for Mamby on the Beach 2018. Not only did the festival win me over, the feeling of being on a beach and enjoying incredible music is what life is all about. You know, we only do this living thing once- and if you don’t seize every moment, you might look back and wonder what you have to hold dear. For me, it will be moments like these: smiling ear to ear, dancing without care, and absolutely rocking out. That’s what it’s all about. Mamby, you were beautiful.