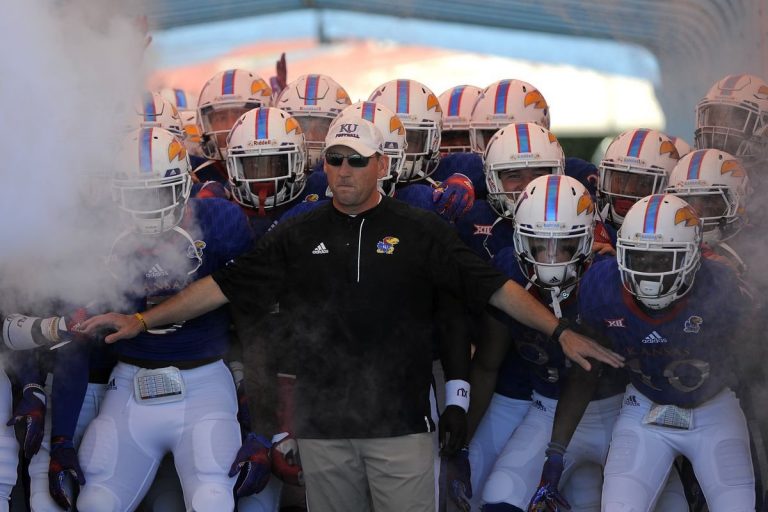 The Jayhawks enter 2017 with easily the highest expectations of the David Beaty era. A team that showed a lot of promise despite a 2-10 finish last year, appears to be ready to take the next step and that all begins with Saturday night’s opening contest against the Redhawks of Southeast Missouri State.

KU comes into the game this Saturday having won its season opener last year against Rhode Island 55-6. Prior to that, KU lost to FCS level South Dakota State 41-38 to start the 2015 season in which Kansas went 0-12. Since 2010 KU is 5-2 against FCS opponents, so they shouldn’t have much trouble in this game. It also helps that the Redhawks went 3-8, with four losses coming by a combined 12 points last season, with zero of those wins coming against FBS foes.

BREAKING DOWN THE REDHAWKS

Last year SEMO had an offense that only managed to score 20.8 points per game. They were balanced rushing for 135.1 yard per game and gaining 213.6 yard per game through the air. They do return their starting quarterback from last season in Jesse Hosket. Hosket threw for 2,332 yards and 11 touchdowns while completing 50% of his passes. They lost leading rushers Will Young and Tremaine McCullough and will have to rely heavily on junior Cameron Sanders, who last year ran for 172 yards on 42 attempts. The inexperienced Redhawks rushing attack will have a little bit of an interesting first test taking on this Kansas defense that last year allowed 236.4 yards per game on the ground.

KU will begin the season with a slight quarterback controversy. Coach Beaty has stated that he has decided on who his starter will be but has not told the media or any member of his team, including the quarterbacks themselves, who will be taking that first snap. We do know it will be one of two options. Either redshirt sophomore Carter Stanley, who started the last 4 games for the Jayhawks last year. Stanley threw for 959 yards and 6 touchdowns while completing 59.6% of his passes. Or the other man battling for the starting job, junior transfer Peyton Bender. Bender spent last year at Itawamba Community College where he threw for 2,733 yards and 21 touchdowns with a 65% completion percentage. Outside of the quarterbacks, Kansas should have a fairly new-look offense with a deep receiving core that will be used to its fullest extent under new offensive coordinator Doug Meachem.

On the defensive side of the ball, KU has the potential to have the most dominant defensive line in the Big 12 behind standouts Dorance Armstrong Jr. and Daniel Wise. Behind them, Kansas has a very solid linebacking group, but also an inexperienced secondary after losing both Fish Smithson and Brand0n Stewart this past season.

At the end of the day, this is a game that Kansas should and honestly must win. A dominant showing would be a great starting point for a season that has the potential to be KU’s most productive since 2009, which was the last season where KU won more than 3 games. The Jayhawks have all the tools to continue to reestablish themselves in the college football landscape and remove some of the labels that have been given with the 7 years of futility Kansas has had since 2010. All in all, we should see a Jayhawk win on Saturday and plenty of wheat should be waving on a lovely Kansas September night.

Jared Lenz and Jack Nadeau on the broadcast. Pregame starting at 5pm on 90.7fm KJHK.