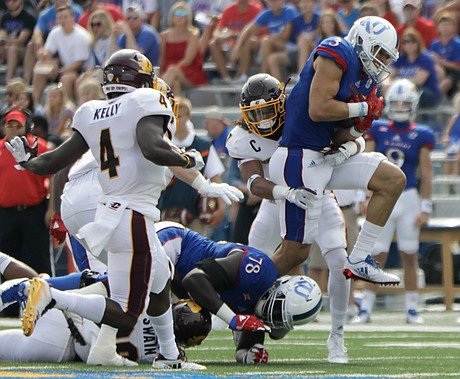 Looking to turn their football program around, the Kansas Jayhawks walked into Saturday’s game against the Central Michigan Chippewas with their heads high. Last week, the Jayhawks beat Southeast Missouri State 38-16 and on the other hand, the Chippewas were coming off a triple-overtime victory against Rhode Island.

Kansas played great in the first quarter, but they were only able to put up three points while shutting out CMU. Despite having a dominant first quarter defensively, Kansas would fall apart in the second. On offense, quarterback Peyton Bender overthrew seemingly every pass. The offensive line allowed too much pressure, causing Bender some stress. Wide receiver Steven Sims was not able to play due to an ankle injury, which put more pressure on the other receivers, causing them to drop easy passes. Miscommunication destroyed the Kansas offense and the poor offense hurt the defense.

Not only was Chippewas’ quarterback Shane Morris able to beat down Kansas’ defensive backs, he did it while having all day to throw the ball. Kansas, known for its defensive line, was unable to put pressure on Morris, which allowed him to make easy passes to receivers Corey Willis and Mark Chapman.

Because of Kansas’ downfalls, the Chippewas would enter the half leading 24-6.

Kansas, looking for hope, got off to a fast start by scoring a touchdown on their first drive of the second half. Then, the Kansas defense forced a three and out, allowing their offense back on the field. The Kansas offense took advantage and scored yet again. Kansas had all the momentum in the world, until Shane Morris once again took over. Morris would march his team down the field and score, shutting down Kansas’ momentum.

Every time Kansas would find a spark in the second half, the Chippewas would have an answer. The Chippewas also had luck on their side as wide receiver Mark Chapman had a spectacular catch in the end zone, that had it been called incomplete it would have resulted in a turnover. Kansas would go on to lose the game 45-27.

Shane Morris threw for 467 yards, 5 touchdowns, and 0 interceptions. He also ran for an additional 32 yards, giving him a total of 499 yards. Wide receivers Corey Willis and Mark Chapman would total 16 catches for 308 yards and 4 touchdowns.

Peyton Bender went 32/62 for 323 yards and 0 touchdowns, he also threw 2 interceptions, although one interception was not his fault. Running backs Dom Williams and Deron Thompson would total 28 carries for 117 yards and 2 touchdowns.

Looking forward, Kansas does have hope against Ohio, a run heavy team. Kansas was able to shut down the Chippewas’ running backs, giving up only 86 yards to the halfbacks. Kansas also found hope in Dom Williams who had a great game where he fought for every inch and showed flashes of excellence. Peyton Bender has also proven he has a very high ceiling as he ran option plays to perfection, was able to call a couple of successful audibles, and has shown that he is not afraid of taking a chance and throwing deep.

The season is not over for Kansas, they just need consistency. The offensive line is capable of protecting Bender, the defensive backs are able to contest wide receivers, and the return team can make big plays. If the entire Kansas team can stay consistent, then this will truly be a great season.