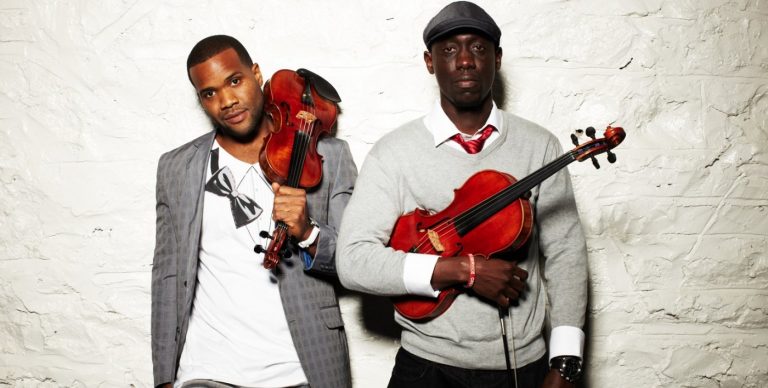 It is unusual that a band receives a standing ovation before performing a single song. However, that is exactly what happened at the beginning of the concert when Black Violin was presented with the Lied Center’s Impact Award, which recognizes an artist or group that has “made an indelible impact on the performing arts in the following areas: Leadership, Integrity, Education, and Discovery.” 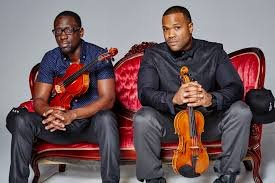 After the presentation, Black Violin began their set, but not before inviting the audience to get up out of their chairs and dance if they felt like it. (These words were especially well-heeded by a man in the front row wearing a red shirt, whose dance moves in the middle of the set drew almost as much applause as the performers themselves). Ultimately, this initial “be yourself and have fun” message fed well into the themes of the performance, which was “breaking stereotypes” and “thinking outside the box.”

Everything in the concert reinforced these themes. They began the concert with their stereotype mostly intact. Their first few songs consisted of their more rap-focused lineup. Even with the violins added, there is nothing too anti-stereotypical about two black men playing hip-hop music. But even so, from the beginning, their classical training was evident in how they had composed their violin and viola parts. But this was a mere crack in the glass compared to what followed.

As the concert continued, they proved themselves as versatile artists, while simultaneously breaking their stereotype. At one point, duo member Wil B serenaded his Viola, Tiffany, with “Thinking Out Loud” by Ed Sheeran. The group continued to show their musical prowess in a Jazz-style improv section in which both duo members, their DJ, and their drummer all got a chance to show off their skills. 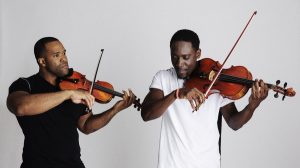 At around this point, they had already established themselves as talented musicians, and they proved themselves further by performing several classical pieces. By now, the stereotype had been completely shattered, and their DJ put the final nail in the coffin with a heavily remixed classical song. Afterwards, the duo gave a short and inspiring speech about breaking the mold and finding ways to be creative, suggesting that the path to greatness is to do something that no one else would think to do.

Then, the hip hop duo closed their show by inviting on the two orchestras from Lawrence High and Free State to perform a one last classical song, with their drummer providing a superb addition by playing a simple rock beat along with it. In the future, I shall demand that all classical ensembles I listen to be accompanied by a rock drummer.

In conclusion, Black Violin provided a performance that was both electrifying and beautiful. It was a concert that only they could put on, because they took their stereotype, did some creative thinking, and made something great with it.