See further no more- Netflix original content rocks now that this The Meyerowitz Stories (New and Selected) is out. Noah Baumbach, noted for making small (-er) independent films such as The Squid and the Whale, which is similar to Meyerorwitz in the way family is dealt with, and Frances Ha, which is more of a singular character study about personal hardships of a young woman in New York. Family is at the heart in this film with the characters always conflicting with each other because of the strained family dynamic. So strained, a dinner-table discussion could be a battlefield. Most of our characters don’t really shed a funny bone in their body but we are laughing due to the fact of the awkwardness familial interactions bring, and since the acting is so good, we feel the sympathy for these characters even though it isn’t funny to them. These moments bring us sadness as well, and make the story as easy to be attached, with this sympathy.

The film stars Dustin Hoffman, Adam Sandler, and Ben Stiller, a huge cast, just by those three, even though the list goes on, including Emma Thompson, and brief cameos by Sigourney Weaver and Adam Driver. They all shine, even though you may have stopped reading at Adam Sandler, due to his latest Netflix flops that try and touch the same base his older comedies did. Sandler is terrific in this Netflix original, and I can say he is in possibly the best Netflix-originally made film so far. 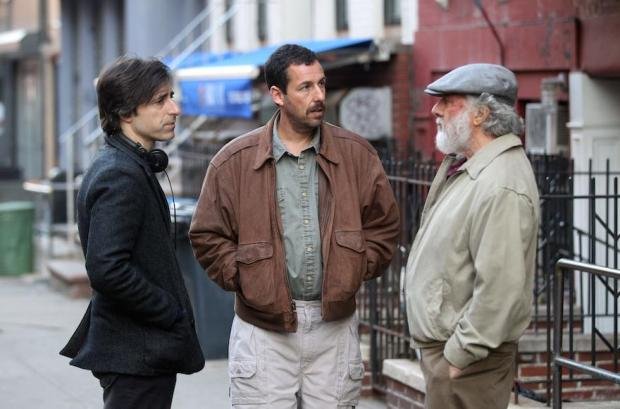 from left: Baumbach, Sandler, and Hoffman; on set of THE MEYEROWITZ STORIES

Although most critics seem to point out the loneliness and struggle that Sandler portrays, some even saying that it may be his turn for an Oscar, I have left one name out from the list of stars in the film earlier, and she receives her own chapter in the film, such as Sandler and Stiller, which she deserves. Elizabeth Marvel plays the quiet Meyorwitz, Jean, brothers of Sandler and Stiller’s characters, Danny and Matthew. Her chapter is easily the best and packs one of the films biggest comedic punches. The film consists of us figuring out why these characters act the way they do around their family, which pays off hardest with Jean.

Conclusively, the film is a must-watch and could be perfect bait for Oscar season besides the fact of the voting academy not being keen on streaming-only films. Also, with the film being a Netflix original, seeking out the audience is hard due to the fact that the film isn’t exactly something we’d expect from the streaming service, due to the fact that it’s different from most of the action or horror fare we usually get from them. Despite that, I recommend you turn on your streaming device to watch the chemistry of these actors come to fruition under the guidance of a good director in the drivers seat.