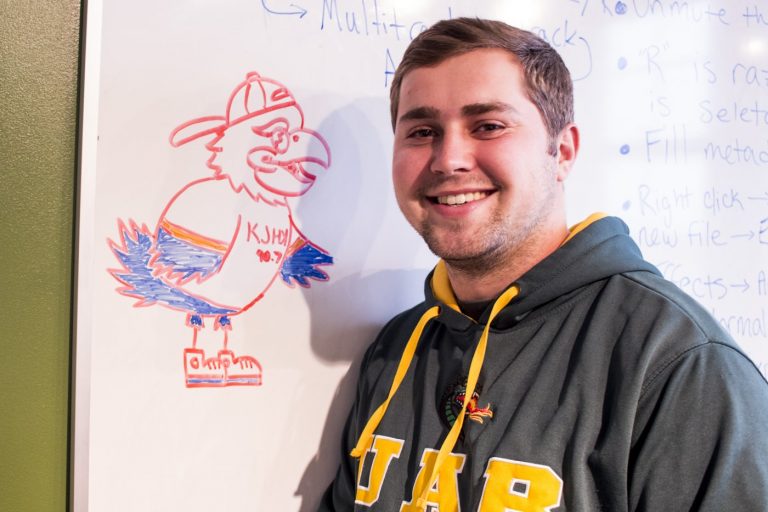 Major: Journalism with a Sports/Media Concentration 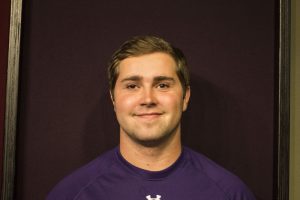 Jackson Sabol: Alright, I guess we can start off with something simple: do you have any hobbies?

Jackson Schneider: Yeah! I like to watch sports on TV. That’s pretty much… Sports is like my biggest hobby in general. You know, being the Sports Director, that makes sense, but I also like to draw. I doodle all the time, which is something I don’t think a ton of people know, but literally every assignment I’ve ever turned in to a teacher there are doodles on it. I kinda have fallen off from this lately; also I used to play tennis all the time. But I’ve kinda fallen off that. I need to get back on, because I’m getting out of shape, but I love to play tennis. It’s a good time, and it’s a fun way to exercise too.

Sa: Awesome! Were you ever on a tennis team?

Sc: Yeah, actually, I was. I played in middle school and high school, and I started out in middle school because my parents wanted me to either run track or play tennis just so I was active somehow, and I did not want to do track, because I didn’t want to run. I never have liked running. So I played tennis. Little did I know that there’s almost more running involved in that, just in shorter stints. But I really enjoyed it. I played in high school. I was a senior captain of my high school team, and I played two years in college before I transferred here at Kansas Wesleyan University. So I played a lot back then, but when I transferred here for school, I kinda just fell off and haven’t played in a while.

Sa: What is your favorite color?

Sc: My favorite color is purple.

Sc: And that’s weird being at KU, I know.

Sc: But I did grow up a big K-State fan, both my parents went there, and I still like K-State, so I kinda keep that more on the low-key, but those who know me better know that. It’s just kinda how I was raised and it’s still deep in my blood, but I like the color, and “it makes my eyes pop,” says my girlfriend, so that’s another reason I wear the color purple.

Sa: So does that mean you prefer K-State over KU?

Sc: No, I wouldn’t say that at all. I’d say I’m more neutral. Like when people think of [the] K-State/KU rivalry, I’m pretty neutral about it. I root for K-State, usually, in that situation just because of how I grew up, but I still root for KU and I don’t dislike either one. It’s just kind of like I have two favorite teams, I guess you could say. 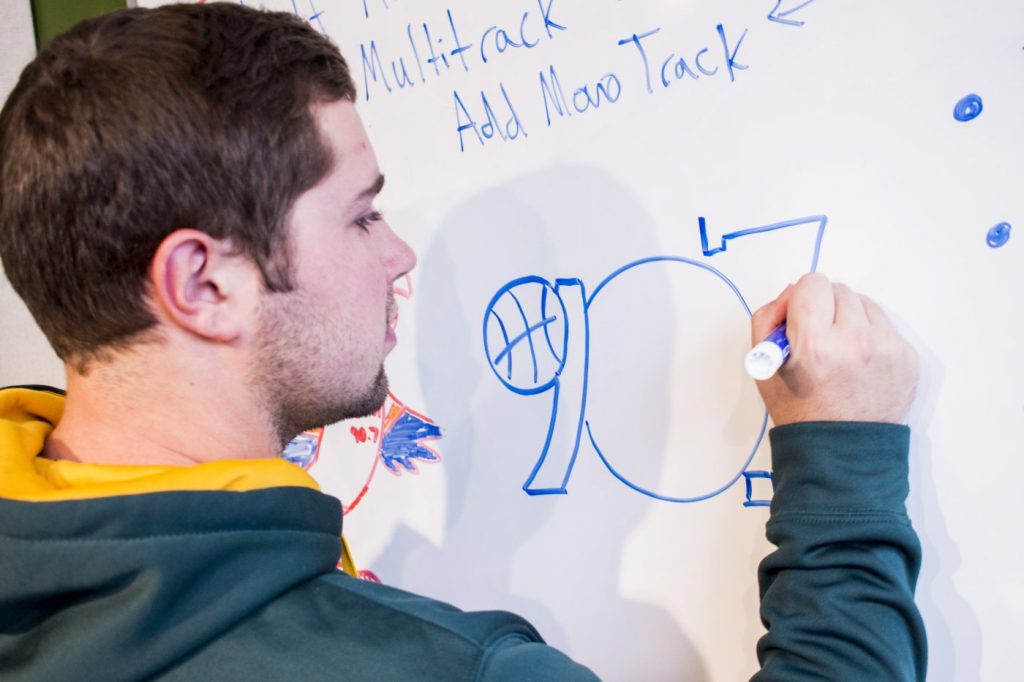 Sa: So what careers are you considering?

Sc: Sports broadcasting, sports media, things like that. Ideally I’d want to be the voice of a college athletics team like basketball, football. Like here at KU, just to follow a team and to be embedded in their culture and history, like when I think back to listening to games on the radio when I was a kid, there was like one voice in my head, and I kinda wanna be that for other people when they grow up to try and do the things that I want to do. I just think it’d be an awesome job. I think it’d be really fun, and the voice of KU, Brian Hanni, I met him while he was just out of college, because my mom worked at the same radio station as him, and as soon as I met him, I kinda just shadowed him around, and watching him do the things he does is just like, re-confirming everything that I’ve thought to this point is exactly what I want to do.

Sa: Cool! Is that why you started here at KJHK?

Sc: Absolutely, so I started my first two years at Kansas Wesleyan, like I said, and they didn’t really have anything like KJHK; it was a really small school, so I helped out with the athletics department filming sporting events and interviewing coaches, things like that. I did high school sports broadcast with the local radio station there, and I was just sure. I knew exactly what I wanted to do, and I realized that I wasn’t going to learn the things that I needed to at that school, and being from Lawrence originally, I knew exactly where I needed to go, and the Sports Director last year, Nicholas Lewis, was one of my good friends from high school, so he was kinda my lead in to the Sport Staff here at the station. I’ve just been kinda learning on the go, but I still love it, and I think it’s even cooler, because in Sports Staff we all help each other work. It’s not like I run the show. It’s more of like, I’m kinda taking charge, but I get help from everyone else. It’s awesome the way we have it set up. 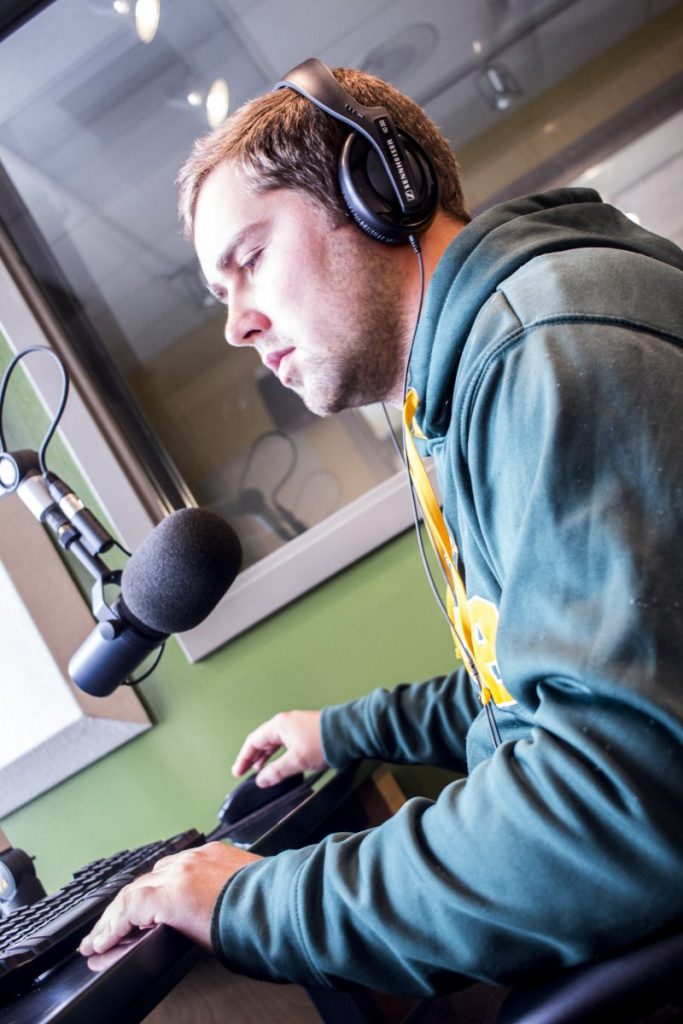 Sa: So, seeing as you are the Sports Director, I figure I should ask you at least ask you a few questions about sports.

Sc: My favorite sports team is the Kansas City Royals. I am a huge fan. I have been my whole life, and up until the last couple of years, that was dreadful to say, we’ve had a good stretch recently, and I think that might be coming to a close, but I’ll support them wether they’re good or bad, but I love ‘em, and I probably always will, so we’ll see how that goes.

Sa: Do you remember where you were during the world series?

Sc: Absolutely. The night that they won it, I was in Power and Light district, and I was in the front row off of the stage inside the KC live area, and I gave a high five to one of the Royals’ broadcasters when the game ended, and I was just in a big mosh pit, and it was one of the coolest experiences of my life. It was just so crazy, and there were so many people just losing their minds. It was a blast and I’ll never forget that. It was awesome.

Sa: So does that mean baseball is your favorite sport to watch?

Sc: I mean I like it a lot. They’re my favorite professional team to watch. I really like watching football if I’m at the game. Basketball is usually more fun to watch on TV I think, because there’s less stoppage and it’s constant action. But baseball’s one of my favorite sports just because the season is so long that it’s always there, and I’m just pretty ingrained in all that.

Sa: So what’s your favorite sport at KU?

Sc: I think it’s basketball, just because they have such a rich tradition and sustained success. It’s always awesome to go to games and watch them play. It’s so competitive, such a high level. It’s a lot of fun.

Sa: Last question now, and this is the most important, I think… Do you foresee the KU football team getting any better in the next few years?

Sc: Yeah, absolutely I do, and my main basis on that is gonna sound kinda harsh, but it’s because you can’t get much worse. But I believe, I fully believe, that David Beaty, their head coach, is the right guy for the job. I think that he’s got the right motives, the right tendencies. I think some changes will need to be made within that staff, most of it on the defensive side of the ball, but I do think they’re going to get better, and I think that it’ll happen in the next year or two. I don’t think they’re going to become overnight National Championship winners, but I think that if we stick with Coach Beaty and give full support to the program, I think they’ll become a lot better in the next couple years.

Sa: Alright, looking forward to it. Thank you so much!

Sc: Yeah no problem, thank you! It’s been fun. I haven’t been interviewed in a long time, so that was cool.

Sc: I feel important that way.

Sa: You are important.