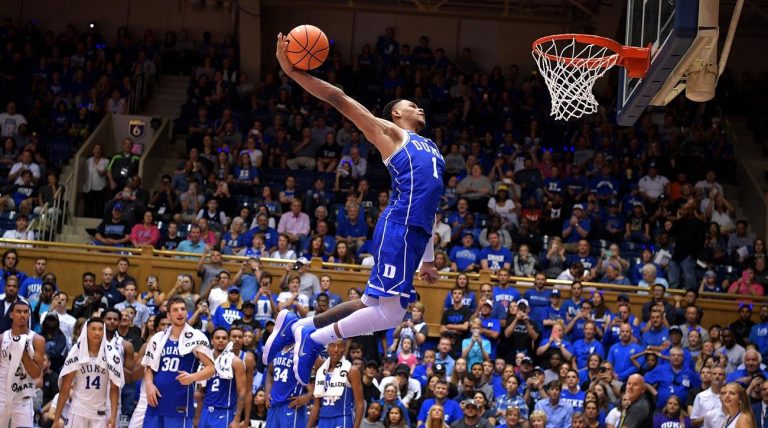 The first weekend of college basketball is over, and the season has officially begun. We were able to get a sneak peak of teams and what they will show for the remainder of the season. Most powerhouse teams played a weaker opponent, but we were still able to witness the Marvin Bagley III hype as well as the questions behind Michael Porter Jr. Now that week one is over, we will look at the top 25 teams in our first regular-season power rankings.

The Bears started their regular season off strong with a crushing win against the Central Arkansas Bears. Baylor walked away with a 107-66 win and all their starters managed to score in double figures. Manu Lecomte scored a game-high 22 points, but the most surprising showing was from senior forward Nuni Omot, as he scored 15 points to go along with his 9 assists and 6 rebounds. With this kind of all-around scoring, Baylor could make a scare in the Big 12.

Press Virginia did not start their season off the way they had hoped as they fell to the Texas A&M Aggies 65-88. West Virginia was unable to find any momentum and could not seem to buy a basket. Star point guard Jevon Carter was only able to score 13 points on 4-11 shooting to go along with his four turnovers. West Virginia got off to a hot start and even lead by 13 points midway through the first half, but their relentless pressure took a toll as the Aggies were able to dominate throughout the second half. WVU only shot 34.3% in the game.

UCLA managed to find a way to win 63-60 as they took down Georgia Tech. Unfortunately for UCLA, they are without three key members, one being LiAngelo Ball, and they won’t be back in America for at least another week. UCLA was not prepared against Georgia Tech, but after returning home and a few days’ rest, they should be ready to take on Central Arkansas, even without those three players.

On the positive side the Gaels defeated St. Francis 85-68 and junior forward Calvin Hermanson scored 24 points to go along with his 7 rebounds. Emmett Naar had an additional 8 points and 12 assists. However, the Gaels had one major problem throughout the game: They shot a mere three free throws. If the Gaels want to make a run in the NCAA Tournament, they need to draw more fouls.

Seton Hall walked away from the weekend with two wins over Fairleigh Dickinson and Monmouth. Seton Hall won both their games by a combined 32 points and look to only improve on their performances. The Big East is a wide-open race and Seton Hall could make a run for the conference title.

Even with all the questions heading into the offseason, the Bulldogs found a way to destroy Texas Southern. Josh Perkins was the highlight of the game as he scored 20 points with 6 3-pointers. The Zags showed to be a complete team and hope to only improve from here.

Northwestern’s season got off to a rough start as they only managed to beat Loyola by four points. Scottie Lindsey was the highlight for Northwestern as he scored 26 points and 9 rebounds, but if Northwestern wants to return to the NCAA Tournament, they cannot continue playing this kind of shaky basketball.

Isaac Haas proved to be a suitable replacement for Caleb Swanigan as he scored 16 points against SIU-Edwardsville (He only played for 17 minutes) and then turned around and scored 8 points to go along with his 3 blocks against Chicago State. Purdue has experience and could once again be a challenger in the Big Ten.

Louisville had so much offseason controversy and things only got worse as they trailed George Mason at halftime. If Louisville wants to prove they are a good team, they must clear their minds and start to play solid basketball once again. If Louisville can live up to their potential, they could be one of the nation’s top teams.

Trevon Bluiett started his season off by scoring 25 points, including 5 3-pointers. The Musketeers defeated Morehead State by 51 points and hope to continue their destructive ways. Xavier could be a sleeper come the NCAA Tournament and Bluiett could be a candidate for the National Player of the Year.

Minnesota is one other team with the potential to take the Big Ten crown. The Gophers allowed South Carolina Upstate to score 77 points, which is not ideal, but still winning by 15 is a positive. If Minnesota wants to give Michigan State a run for their money, then Minnesota will have to play better defense against tougher opponents.

Bonzie Colson highlighted an impressive showing against DePaul in Notre Dame’s first game of the season. Colson scored 18 points to go along with 13 rebounds and looks to only improve his game from here on out. Notre Dame could finish as one of the top teams in the nation as well as a trip to the Final Four, but for now, they look to topple Duke in the ACC.

The Aggies started their season off great by defeating West Virginia 88-65. The Aggies got off to a slow start, but managed to adjust to defeat West Virginia’s press defense. The Aggies showed their athleticism and outlasted WVU down the stretch, eventually destroying the Mountaineers. The Aggies not only dominated in this game, but did it without Robert Williams and JJ Caldwell. The Aggies could do some serious damage in the SEC.

Last week I said this team lacked depth, Miami has proven me wrong. In their first two games, Miami scored a combined 166 points. Of those 166 points, 62 came from the bench, accounting for 37% of the team’s total points. The Hurricanes have exploded onto the scene and are making a compelling case for the best backcourt in the nation.

Speaking of deep benches, the Bearcats played 15 guys in their 107-77 win over Savannah State. Four of Cincinnati’s starters scored in double digits and had two players off the bench score in double digits. If Cincinnati continues to play like this, they could walk away with an American Athletic Conference title.

Florida defeated Gardner-Webb 116-74 in their first game of the season. Egor Koulechov started his career at Florida off great by scoring 34 points including 6 3-pointers. Florida did allow Gardner-Webb to score 74 points, but the Gators’ offense played even better. If Florida can improve on defense while continuing this kind of offense, Kentucky will have a hard time matching up against the Gators.

Even without Joel Berry II, the Tar Heels were able to top Northern Iowa 86-69. The Tar Heels are coming off a season which they won a National Title and hope to return to the big game once again. Even with all the losses this past offseason, never count out a Roy Williams team.

The Wildcats won their first game against Utah Valley 77-67. However, the Wildcats were trailing 34-25 at halftime. The Wildcats then turned around and beat Vermont 73-69. The Wildcats have struggled in their first two games and their schedule only gets tougher as they take on Kansas in their next game. The Wildcats will try to prove they are a top-10 team, but after struggling against two of the weaker teams in Division I Basketball, things are not looking to be in their favor.

USC defeated Cal State Fullerton 84-42 and dominated on both sides of the floor. USC is trying to prove they are not a football school, but could this be the year their basketball team is better than their football team? Only time will tell.

Villanova defeated Columbia 75-60, however they heavily struggled throughout the game. The Wildcats could not buy a shot from long-range and even struggled on defense at times. Villanova is still trying to adjust after losing key players from last season’s team. The Wildcats will not play a ranked opponent until December 5th, giving them time to adjust to this year’s squad.

Wichita State defeated UMKC 109-57 and dominated on both sides of the floor. The Shockers shot 61% from the field and never let up. Wichita State then turned around to defeat Charleston 81-63 and never once trailed in the game. If the Shockers can continue their dominant ways, the AAC will be theirs.

In the preseason, the Jayhawks biggest concern was the lack of rebounding. After Friday, that problem does not seem to be much of a concern. Even without Billy Preston, the Jayhawks defeated Tennessee State 92-56 and outrebounded them 45-23. If the guards can continue using their athleticism to get rebounds and second chance points, there is no telling just how good this Kansas team could be.

Both Miles Bridges and freshman phenom Jaren Jackson Jr. had a double-double against North Florida. The Spartans won the game 98-66 and looked dominant throughout. The Spartans will take on Duke in the Champion’s classic and hope to prove that they are a true contender.

Allonzo Trier scored 32 points against Northern Arizona and proved why he is a candidate for the National Player of the Year. Deandre Ayton added another 19 points and 12 rebounds and made a solid case for the Freshman of the Year. If the Wildcats can continue playing like this, they should run away with the Pac-12 title this season.

Marvin Bagley III is the front-runner for the Freshman of the Year and even potentially the Player of the Year. In his first college game, he dropped 25 points and 10 rebounds and then turned around the next day and scored 24 points to go along with 10 rebounds. Trevon Duval proved to be a great asset as he dropped 8 points and 8 assists against Elon and then scored 15 points to go along with 12 assists against Utah Valley. Duke will be tested Tuesday night when they take on Michigan State, but from what we have seen, Duke should walk away with a win.