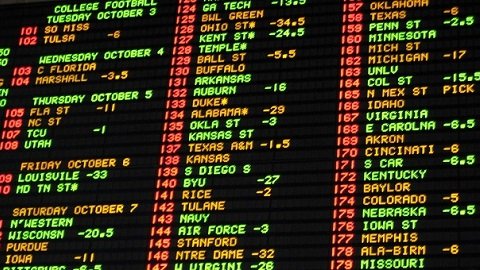 It’s officially conference championship week in college football, and around Lawrence, Kansas, most all attention has now completely shifted to basketball. For those of you who are still genuinely focused on college football and the playoff hunt, or are looking for a way to make it more interesting, this guide is for you.

Just as a disclaimer, gambling is illegal, so I am not encouraging you to partake in illegal activities, but if for some strange reason you decide you would like to, all of the lines and odds that I will be using come directly from Bovada.

These teams have already played once before in a game that USC dominated 42-24, so the edge here obviously goes to the Trojans. That being said, it’s a tall task to beat the same team multiple times in one season, so don’t count Stanford out.

If we go by the last matchup, USC will cover the -4 and the current over would hit, but this is a conference championship, so we can be sure things will change at least a little.

Stanford’s offense is lead by Heisman candidate Bryce Love who currently has 1,848 rushing yards and 16 touchdowns, so he will be the biggest key in Stanford covering. In their first meeting, Love ran for 160 yards and a TD on 17 carries, so you can bet USC will have guys hovering around him on every play.

For USC, they did just about anything they wanted in that first meeting. Sam Darnold threw for 316 yards on 21/26 passing for 4 TD’s and 2 INT’s. In addition to Darnold, USC had two running backs with over 100 yards, and tallied a total of 307 yards and 2 TD’s on the ground.

This is a highly anticipated  matchup of the top two group of five teams in the country. Unfortunately, the first meeting of the two teams this season was a blowout. Their originally scheduled matchup was rescheduled due to hurricane Irma back in September. At the rescheduled matchup, Memphis got rolled by UCF 40-13. I would expect major adjustments to be made, but neither team looks to have a solid defense lately.

One thing sticks out in this matchup to me, and that’s the fact that UCF gets home field advantage. Yeah, I know, it sounds odd. What advantage does having home field really bring to a smaller conference school like UCF? Well, for starters, the Knights can sleep in their own beds, practice and go through their normal daily routines, as well as have their own fans behind them, so it certainly plays into their hand.

I can also promise you one thing. If there were ever a lock of the week, it would be the over for this game. Both teams average over 47 points per game. Memphis allows nearly 31 while UCF gives up just 22.5. Seriously, there will be points scored, and lots of them. Yes, I know, overs don’t often hit in championships, but I’m confident that this will be a high scoring game in the G5.

In terms of the point spread, Memphis will likely hang around, much as South Florida gave UCF a run for their money last week, but I’m not sure it will be enough to cover the seven points Vegas is giving them.

Oklahoma dominated the first meeting between the two best teams in the Big 12. Baker Mayfield didn’t even have to do all the work either, as Rodney Anderson contributed 151 yards and two TDs on 23 carries, as well as 139 yards and two more TDs on just five receptions, en route to earning himself Big 12 Offensive Player of the Week. If TCU can’t find an answer for Rodney Anderson this time around, they’ll be in a world of hurt once again.

Kenny Hill and the TCU offense have looked strong in recent weeks, but this week will be all about their defense. The Horned Frogs defense gives up around 15 points per contest, while OU’s offense

tallies 45.3 per outing. In order for the Frogs to have a chance to win, let alone cover the 7.5 they’re being given, they absolutely have to control the tempo and keep Mayfield and company off the field.

I think TCU will have a good ballgame and hang around but Oklahoma is just too good. They’re arguably the best offensive team in the nation and they will undoubtedly win this game, but I think TCU’s defense will slow the pace enough for the under to be worth betting in this game.

Auburn handed Georgia their only loss of the regular season just a few short weeks ago, and it was an absolute murder. As I said before, it’s extremely difficult to beat another team twice, but in my humble opinion, when one team is that much better than the other, you can probably assume that they can win a second time.

That being said, Auburn is only a 2.5 point favorite over the Dawgs in the SEC title game. So this seems like the perfect opportunity to say SMASH THAT LINE. Auburn will win this game, and they will win it by at least 3 points, so take that advice and make yourself some money.

Now the total is another story. The first meeting hit a total of 57, so eight less makes it intriguing. Generally, unders are the safer play in championship games because defenses are amped up and playing with their hairs on fire. I would say that Auburn will probably win this game by 4-7 points in a typical SEC slugfest, so take the under again in this matchup and root for defensive stops.

The Big Ten has routinely been run by Ohio State, but I’m hesitant to believe they’re the best team in the conference this season. Wisconsin has yet to drop a game, but have continually been questioned as a quality team due to a lack of strength within their schedule. Well, it certainly gets tough for them against an Ohio State team that is gunning for an outside shot at the College Football Playoff.

Believe me, I’m well aware that I’ve been riding favorites throughout this article already, but that changes here. Wisconsin needs to be respected as one of the best teams in college football.Wisconsin has one of the best rushing attacks in the nation, averaging nearly 250 yards per game. They also stop the run better than just about everyone, allowing just 80 per contest. Ohio State will test them through the air, but with J.T. Barrett coming into the game with some injury concerns, the Buckeyes may struggle a little offensively.

Furthermore, Ohio State has two losses. In both those losses, they were completely over-matched. Oklahoma beat Ohio State by 15 in Columbus and followed that up later in the year with a THIRTY ONE POINT LOSS to a 7-5 mediocre Iowa team. Something’s got to give here.

I fully anticipate this game to be a typically low-scoring Big Ten game, but look for the Badgers to silence the haters and get you rich, not only covering but winning outright.

If Clemson loses this game, they are OUT. If Miami wins this game, in all likelihood, they are IN. So with that, this game is very important for the playoff picture.

From my eye test, Clemson is a good football team. Miami is a fraud. Good teams get upset sometimes, especially when your starting quarterback gets injured in that game. For Miami, their starting quarterback got benched in their only loss. That doesn’t add up well for the Hurricanes. A QB battle doesn’t seem to be a recipe for success heading into your biggest game of the year.

Clemson should absolutely roll Miami, so hit up the Tigers to cover that -10, and in a blowout, I would expect the over to hit as well because Miami will score at least 14 points, and maybe a little garbage time TD will help push it over.