The Museum of Odd: A Sentimental Reason

Just a few blocks East of historic downtown Lawrence Kansas exists a vivid time capsule of peculiar items and rarities. Unbeknownst to most of the local community, this Museum of Odd is accepting schedule-based tours within a residential home in the East Arts District. From the outside, 1012 New York Street would appear to be another ordinary house on a street of family homes if it were not for the eccentric proprietor, Randy Walker.

Randy Walker is an estate liquidator and curator of his own vintage merchandise booth located in the downtown Antique Mall. His love affair and life’s passion began at an early age spending summers with his grandparents. His grandfather would take him out to “A junkyard pile to find strange reusable items,” he said.

He recalls one specific trip finding “hundreds of valuable daguerreotype photographs laying there.” To his regret, his mother would not allow him to purchase these pictures. “To this day when I do estate sales, I encourage people to take home their family photos. That stuff is irreplaceable. You may not want it now but thirty years down the line…” he says.

He has been in the “junking business” for over 40 years and naturally develops long-standing relationships with the regional community and beyond. Over the years Walker has also worked for the Fraternity and Sorority houses at the University of Kansas in which he would cook large batches of meals for the students. 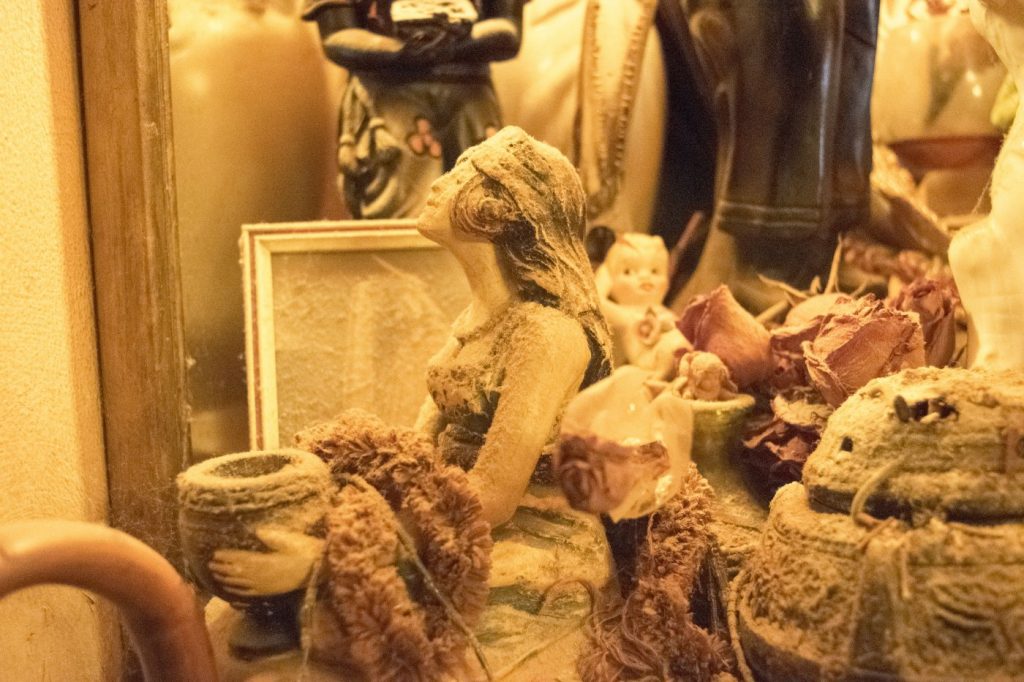 From the minute the screen door creaks open to his home, your vision is struck by an obtrusively large claw-footed bathtub overflowing with 1950’s sock monkeys. Author Pam Grout’s book, Kansas Curiosities: Quirky Characters, Roadside Oddities & Other Offbeat Stuff has referred to Walker as “the Jane Goodall of sock monkeys,” a title which he delightfully accepts.

The home is lit by a wealth of moody vintage lamps and a familiar scent of a rosemary chicken soup. Dust-ridden shelves and obscure tabletop statues line the interior walls in his museum home. You’ll also discover a small collection of calcified cow hairballs he has acquired from butcher shops across the country.

Upon meeting Walker in his home, a sense of ease washes over as he offers a cozy seat and a glass of wine. Any level of awkward introductions are immediately dispelled upon starting his guided tour.

As the tour of this modest 900 square foot home continues, your cheek is graced by strands of bright pink beads adorning the next room’s doorway. Beyond which holds a dense collection of obscurities including a seductive 1970’s velvet painting of a nude female, and an array of items containing Elvis Presley’s DNA. It is undeniable in Walker’s museum you’ll find a certain charm unachievable in any government funded museum. 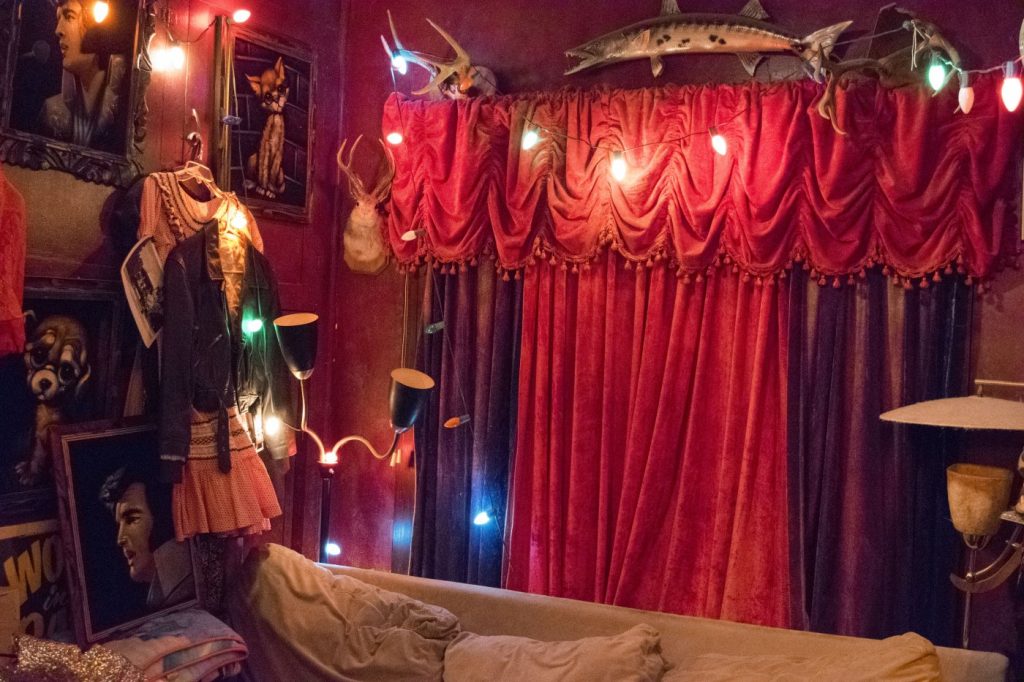 “Walker was a longtime regular at the bar when I first started,” says, Prashant Patel, a longtime friend and local bartender at The Eighth Street Taproom. After meeting Walker for the first time, Patel said, “He was a very congenial and amiable human being and working at a bar, the two go hand in hand. He was instantly endearing.”

Patel would serve him strong drinks while Walker gave him flack and told him to “take it easy.” He would constantly remind me for a month straight, his preferential drink, a Cuba Libre, even though he had instructed me many times before,” he said. Patel refers to Walker as so much more than the initial assumption.

When asked about his colossal collection of sock monkeys or his bottlecap figurine ashtrays, Walker tells of his appreciation four items others might not deem as desirable or even profitable. He says, “Creativity has to come from somewhere. Whether you have four items or none to use.” He employs the notion that, “The human spirit will always create.” Walker finds a thrill in collecting items which tell a greater story. His eagerness to guide you through his museum not only feeds his enthusiasm of sharing a humanistic narrative behind his items, but also satisfies the intrinsic desire to connect with others.

If you are interested in visting The Museum of Odd in East Lawrence, please visit https://www.facebook.com/MuseumOfOdd/ to book an appointment.