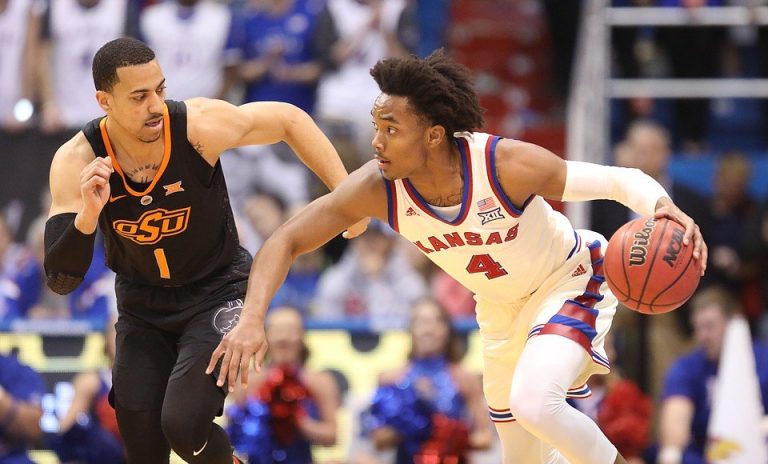 Most thought that the game between Kansas and Oklahoma State at Allen Fieldhouse was supposed to be a blowout win for the Jayhawks. Instead, the Cowboys dominated the glass and led for 37:45 en route to an 84-79 victory.

Oklahoma State came in with seven players averaging over 20 minutes a game, which automatically posed a threat to Kansas’ much talked-about lack of depth.

This proved to be problem, especially on the rebounding front, as Kansas was out-rebounded 41-28, which also resulted in 26 second-chance points for Oklahoma State. They also scored 20 points off turnovers.

Kansas was not able to defend the perimeter either, allowing Oklahoma State to hit 12 three-pointers, pretty much letting them take any shot they wanted throughout the game.

The leading scorer was Oklahoma State guard Kendall Smith, who seemingly couldn’t miss throughout the game, along with guard Cameron McGriff who added 20 points himself.

The real difference in the game, though, was the intensity and aggressive play of Oklahoma State. They simply seemed to want this win more, which makes sense when the Cowboys repeatedly got second and third chance points all the way to the end.

This game was very comparable to the Arizona State loss back in non-conference play. Both teams were able to counter every blow by Kansas, make three-pointers and attack the glass for 40 minutes. That is pretty much the blueprint to beat this Kansas team.

On the defensive side, Oklahoma State was aggressive as well. They forced tough shots for Kansas, most notably guards Sviatoslav Mykhailiuk (7-18), Lagerald Vick (2-10) and Malik Newman (4-9).

Some could say that this may have been a trap game, but really it just shows how inconsistent Kansas has been this entire season. For some reason, Allen Fieldhouse has not been the impenetrable force as in years’ past, with this being the third home loss.

Also, Kansas now is not in as good of a position in the Big 12 conference race as this loss drops them to 7-3 in conference play. Texas Tech and Oklahoma are still knocking on the door, especially with games left to play against Kansas.

Granted, Kansas is still in the driver’s seat, but it just won’t be a smooth ride to the finish.

What Kansas should really take away from this game is that they need to attack the glass more. This isn’t the first time that rebounding has hurt them this season and it most certainly will come up again later as the season progresses.

Kansas will next take on TCU at home on Tuesday, Feb. 6. Catch the game on  90.7 FM KJHK, with pregame coverage starting at 7 pm and tip-off set for 8 pm.