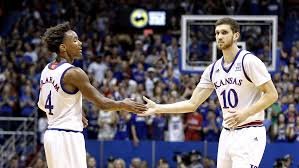 The Kansas Jayhawks are in a tough position. KU is tied atop the Big 12 Standings with Texas Tech, both hoisting a 7-3 conference record. Kansas is also coming off an 84-79 loss to the Oklahoma State Cowboys. If the Jayhawks hope to win a 14th consecutive conference title, they must play Tuesday’s game against TCU with little to no error.

Kansas has already lost three games in Allen Fieldhouse this season, the most since the 1998-99 season. The Jayhawks have been vulnerable at home and must find a way to turn things around, which is a major reason the TCU game is so important.

For the Horned Frogs, they face an even bigger obstacle than Kansas. TCU started non-conference play undefeated and have since fallen apart.

The Horned Frogs have struggled since Big 12 play began and need to get back on track if they want a higher seed come NCAA Tournament time.

TCU is also coming off a loss. An 83-71 home loss to Texas Tech. Despite TCU’s struggles, they still lead the Big 12 in field-goal percentage, 3-point percentage, and assists.

TCU boasts a great offense that Kansas will struggle defending, although TCU is without guard Jaylen Fisher, as he is out for the remainder of the season due to injury.

The Jayhawks are playing for something bigger than a one-seed in the NCAA Tournament. A fourteenth consecutive Big 12 Title would give Kansas the all-time record for consecutive titles and would secure Bill Self’s place as one of the sport’s all-time greatest head coaches.

If the Jayhawks want another conference title, they must play TCU with confidence. Kansas needs to shoot well all throughout the game, not just the first 10 minutes. Kansas also cannot be manhandled on the boards, which is a huge reason KU lost to Oklahoma State, getting out rebounded 41-28 and allowing OSU 26 second chance points.

TCU is without their starting point guard and have been vulnerable when moving the ball. Kansas will have to force turnovers and convert on the offensive end if they hope to stay on top of the Big 12.

The Jayhawks force the needed turnovers and find a way to shoot with efficiency. The Horned Frogs will keep it close, as previously stated, they are the best shooting team in the Big 12. Kansas manages to pull away just enough down the stretch and win the game.

Kansas is led by senior duo of Devonte’ Graham and Sviatoslav Myhkailiuk. Svi has been playing lights out lately and if he continues playing this way, he could make a case for First Team All-Big 12. As of lately, Graham has been struggling both shooting and moving the ball, almost as if he is nervous. Watch for Graham to get out of his slump and prove why he is the leader of this Kansas team.