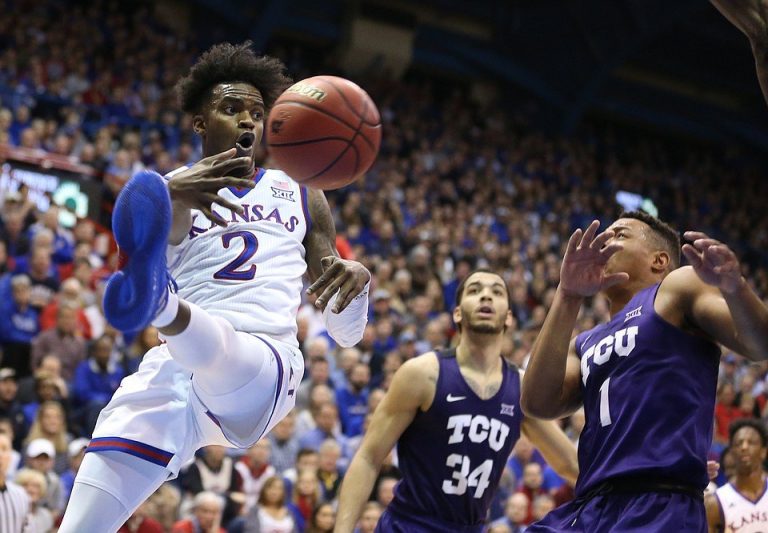 The Kansas Jayhawks rebounded to their home loss against Oklahoma State with a win against Texas Christian University last night by a score of 71-64.

After a shaky first half, the Jayhawks outscored the Horned Frogs by nine in the second, sealing the deal with pivotal free throws down the stretch. Ending the final four minutes on a 9-4 run, with all Jayhawks points coming from the free throw line. Bill Self was allowed to take a sigh of relief, as the Jayhawks were able to stop a chance at consecutive home losses.

Senior guard Devonté Graham lead the game with 24 points, 5-for-9 behind the arc, moving him up three spots in the school’s all-time scoring list, now tied with 1969-72 guard Bud Stallworth at 22nd with 1,495 career points.

In the paint, sophomore center Udoka Azubuike put up his fifth double-double of the season, with 16 points and 11 rebounds, but the story coming into the game was Bill Self’s decision to substitute into the starting rotation sophomore forward Mitch Lightfoot for junior guard Lagerald Vick, who reached his tenth consecutive game with four or less field goals.

Lightfoot impressed when he needed to, having six points and four rebounds along with two momentum building blocks in 22 minutes of play. Vick struggled away from the free throw line, 33% shooting on the evening, needing four free throws to reach double digits in 29 minutes off the bench, his second time not starting this season.

On the visitor’s side, once-ranked TCU put up a good fight for the majority of the game, but lost handling as time had an inverse relationship with the energy in Allen Fieldhouse. Freshman forward Kouat Noi led the team with a career high 17 points off the bench as senior forward Vladimir Brodziansky and sophomore guard Desmond Bane combined for 27 points, with the trio responsible for over 50% of their team’s scoring.

Although they lost the game, TCU impressed Kansas by outdueling them beyond the arc, where they were 10-for-25. As well as having the advantage in rebounds and steals, they simply could not close on the Jayhawks’ lead, missing seven shots in the last four minutes.

That sloppiness costed their chances at getting back in the game late, with Kansas making nine of their last ten free throws the sign off the game, leading TCU to a 3-7 record in 2018.

The 16-8 Horned Frogs will look to get back into NCAA Tournament contention when they host the Texas Longhorns this Saturday on ESPNU at 1PM.

The 10th ranked and Big 12 co-leading Jayhawks, 19-5, will near the end of their six-game unranked-opponent streak when they visit the Baylor Bears this Saturday on CBS at 1PM.