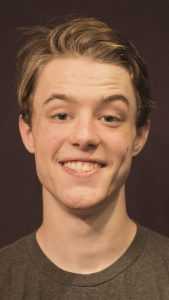 Grace and Eleanor: So who are you?

G: How did you get started at KJHK?

K: I actually, ever since I was in high school I really wanted to be in KJHK. I lived about like 20 miles from here so I kind of got KJHK, and it just sounded really cool. Once I knew it was the university’s radio station I had two choices: Go into the marching band or do the radio station when I came to KU. I decided I was going to choose the radio station and do something I hadn’t done before. And so I just walked up to the station manager at the time and I was just asking him questions, and I think I came up to them like too many times. But they gave me a live show the first semester I applied. So it was just really cool to see that payoff. So yeah, that’s how I got into it.

E: Did you always want to go to KU then?

G: What is your favorite part of both being a part of KJHK, and more specifically being live music coordinator? 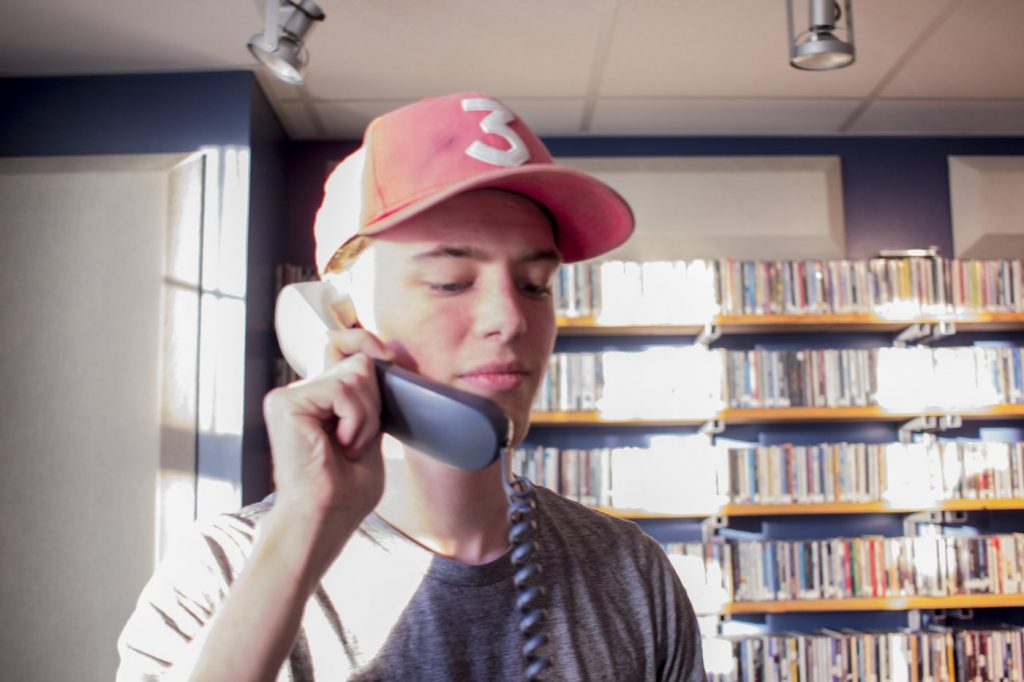 K: That’s a big question, I love a lot of things around here, but I’d have to say my favorite thing is the people who work here that you just get to interact with on a day to day basis. I love walking in and hearing everyone’s different sets and hearing their musical taste come through in their shows, it’s really intriguing to me. My favorite part about being assistant live music coordinator is probably just meeting with all the bands and hearing the different sound that they bring to the local music scene which is really a lot of what assistant live music coordinator is. I do a lot of work for “Tunes at Night”, which is the local music showcase. And a lot of that’s just like emailing making back and forth, making sure the shows all ready to go. But once you actually get to the show and you meet the band and you see them perform it’s really interesting to see not only what all your efforts go towards, but just the sound that they bring and how they contribute to the local music scene in Lawrence.

E: Ok, so we never really asked what your job sort of consists of, or what are your responsibilities?

K: Yeah, as assistant live music coordinator my job is to basically help out the live music coordinator. But, most of my job is “Tunes at Night”, like I said the music showcase here at KJHK and KU hosted at the Lied Center once a month. So what I do is with the live music committee, which consists of both KJHK and SUA, is go through and we have a list of artists that either they’ve come up with or we’ve come up with and we pick out bands from there. I email the list of bands, they either say “yes we want to do this” or “this doesn’t look like it’s gonna work out” and basically I coordinate everything from the food that’s going to get brought there, to input lists; which is what the band needs to be provided by the venue. Additionally, I do help out with some of the bigger events like Midwest Fall Fest and help set up some of the bigger concerts like Princess Nokia and GoldLink that happened last semester. And helping out with those is really cool too.

E: Are you a Senior?

K: No I’m actually a Sophomore. It was really cool to get a position in the executive staff. I applied for it as a Freshman, but getting it as a Sophomore is super cool. I guess you can say I indirectly met Run The Jewels through KJHK. We got invited by the Pitch, which is the local music newspaper to Buzz Beach Ball. They gave us three tickets to day two and they had like a little networking thing that they were having at Buzz Beach Ball, and I was really excited it was night two, I wanted to see Run The Jewels – it’s one of my favorite rap artists. And through indirect means, I couldn’t find the place where it was and I walked up to this girl who was near backstage I was like maybe if anyone can tell me where this is she will and she must’ve mistakenly thought that I had a backstage pass so I got into the meet and greet with RTJ. So it was really cool to accidentally have that happen, but it’s also awesome to have people like the Pitch recognize us and be like hey here’s a free ticket to this big concert that’s in KC, come out and network. It’s really cool to have them recognize us like that and just meet all the other music journalist, around Kansas City and Lawrence.

G: That’s awesome, is there anything difficult that you weren’t expecting with the job?

K: Like I mentioned before it’s a lot of networking and making sure everything’s good to go. I think I was a little bit naive when I went into the job. I thought like “oh cool its gonna be a lot of meeting artists and working at shows” and things like that, but 98% of my job is just in the office emailing everyone and making sure everything works. Also,  just talking with people and kinda having that social aspect that makes sure the concert runs as smoothly as it can, and I think that it’s not something I expected, but it’s definitely something I’ve embraced because I like the social aspect of it.

G: Do you see yourself doing something along these lines in the future?