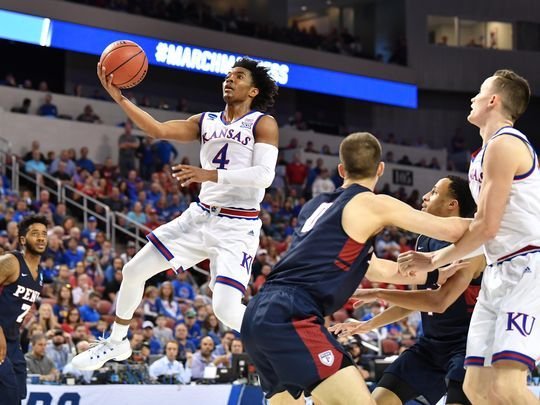 Saturday marks Kansas basketball’s 150th game in the NCAA tournament in program history, but while a No. 1 seed against a No. 8 seed might not appear daunting on paper, Bill Self and Co. might be facing the biggest matchup—literally—of the entire season.

The Pirates boast a lineup that not only is loaded with size, but is also deep enough to consistently provide mismatches for what is a much smaller Kansas lineup.

Among all of the players to be focused on for Saturday night’s matchup, senior Angel Delgado, a 6-10 post machine, poses as the biggest problem-causer for the Jayhawks. Delgado, who is averaging a healthy double-double this season, has crushed multiple BIG EAST and NCAA records in his four years as a Pirate.

“He’s a work horse,” Kansas head coach Bill Self said in a press conference on Friday afternoon. “He never quits trying to wedge or get position for rebounds…he’s a professional rebounder.”

Delgado, who is three months older than KU’s Devonte’ Graham, might not normally be as much of an issue for the Jayhawks with a fully healthy lineup, but Kansas enters Saturday with a banged up Udoka Azubuike, still ailing from a Grade 1 MCL sprain he suffered 10 days ago.

Azubuike was available for KU’s first round matchup and was used sparingly for three minutes in relief of a struggling Mitch Lightfoot and Silvio De Sousa and seemed to be the spark plug that ignited both other forwards to step up their play. However, the Nigerian product will have to maneuver through his ailments to slow down one of the best big men the Jayhawks have seen all season.

With a win on Saturday night, Kansas would advance to its 31st Sweet 16 in program history. To get there, the Jayhawks will turn to Devonte’ Graham for an encore of the 29-point performance he had against Penn in the Round of 64.

Tip-off is set for 6:10pm CT on TBS, and will be broadcast live on 90.7fm KJHK with Jackson Schneider and Arman Alhosseini on the call.