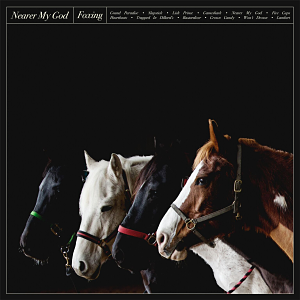 Three years after previous album The Dealer, Foxing is back and better than ever. Never a band to be easily classified into a definitive genre, the group even further distorts these boundaries in Nearer My God. This LP is uncharacteristically upbeat (almost manic) but does not sacrifice the band’s penchant for raw intensity and poignant lyrics. It’s still “emo” music—but in an entirely different sense.

Nearer My God is one of the few albums in existence that is consistently excellent all the way through. Each song has a distinct identity and plays with sound in its own way, leaving no room for monotony. As with any album, there are standout songs; even these are subject to change listen-to-listen. Most importantly, there are no bad songs on the album—the spectrum of quality varies from ‘great’ to ‘absolutely phenomenal,’ but never strays lower.

One song that does stand out, perhaps primarily due to its length, is “Five Cups.” On the new LP, this nine-minute track comes the closest to emulating Foxing’s previous dark, subdued sound. The lyrically soul-wrenching tune features lines such as the repeatedly screamed, “I want to drive with my eyes closed,” and “I won’t wait to be saved.” Though the words are far from the cleverest or most embedded with hidden meaning on the album, the visceral emotion is a punch directly to the rib cage.

As one might expect from Foxing, the name of the album (and one of its tracks) is a wry joke in and of itself. It’s not the first time—and probably will not be the last—that Foxing’s music is laced with religious undertones. “Nearer My God to Thee” is a popular Christian hymn that has become conflated with doom and despair throughout history. It is, for instance, said to be the song the band played as the Titanic sank.

In an interview with Stereogum before the album’s release, the members of Foxing discuss their own sense of doom and trepidation in creating Nearer My God. The album was a fantastically large musical endeavor following a seemingly never-ending streak of bad luck (including accidents and property theft). These occurred on top of the traditional obstacles of being band mates, such as members leaving or starting side-projects.

To make Nearer My God a success, then, the band members had to give 110% effort. They threw their all into the creation of this LP, and the effort definitely shows. Victory is sweet for Foxing; and for the rest of us, the product of their blood and sweat is a powerful, groundbreaking album that will surely be trending for months to come.