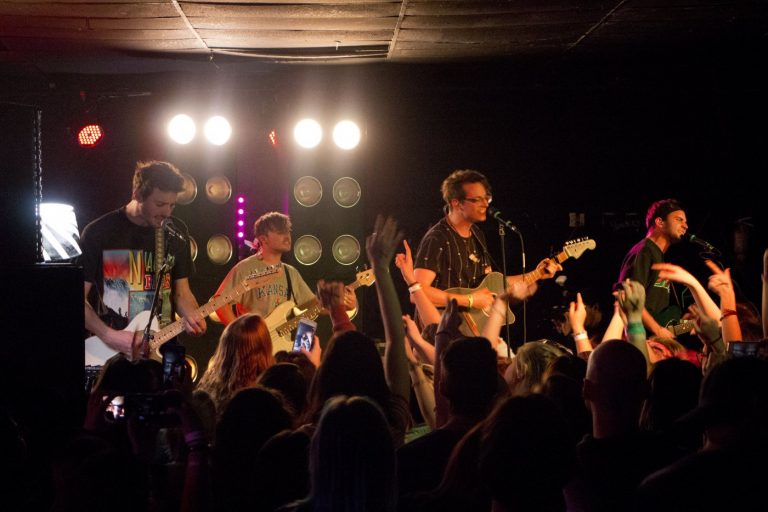 Review: The Wrecks! @ the Bottleneck!

Walking up to the Bottleneck on Friday, I joined the line of excited fans outside. Huddled close to the walls, the line grew longer and longer as more people showed up, ready to suffer waiting in the cold weather. At seven, doors opened and I followed the line as it poured inside. A group of people hurried past me to join the cluster near the stage, already excited and smiling. Expectations were clearly high for tonight’s performance.

Before coming to the show, I had looked up The Wrecks. A relatively young band from California, they had released their debut EP Favorite Liar just recently in 2016, and two years later with eight songs officially out, the evening could have followed the suggestion of the band’s name and been a horrible wreck. And yet during their short career as a band, they were holding on to a reputation of being an exciting group to see live. This was the reputation that the crowd was looking forward to seeing in action on Friday, and so was I. 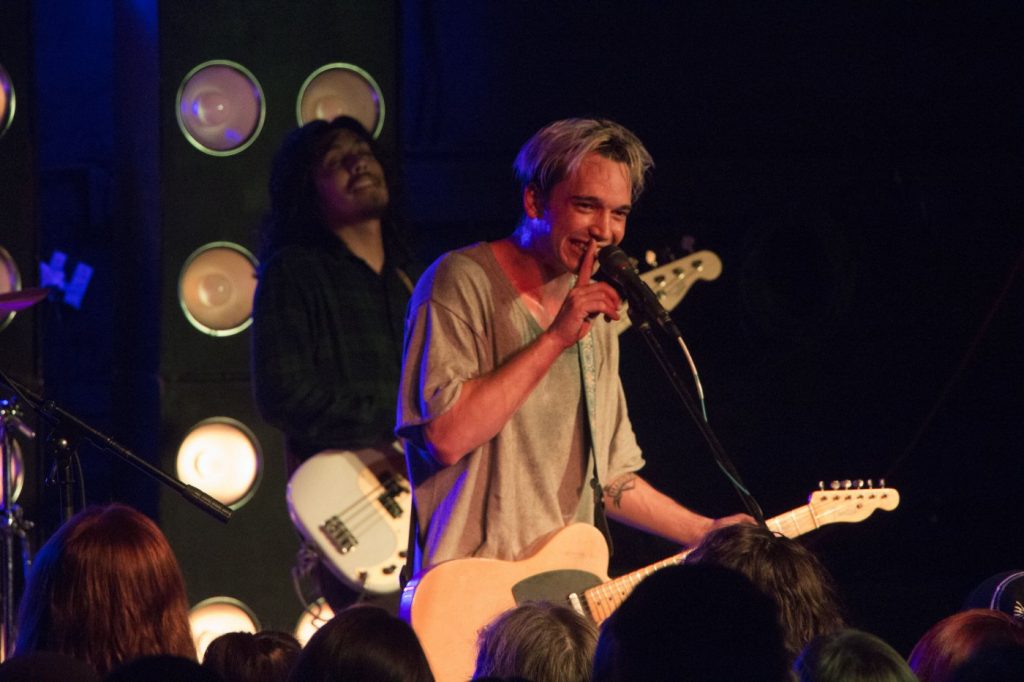 With support from two Indie Rock bands, Deal Casino and Badflower, the crowd got only more hyped up with these performances, each delivering about a thirty-minute set. I highly recommend listening to these bands’ music and seeing them on tour. Both of these bands were clearly a crowd favorite, with many of the audience members knowing the lyrics to their songs, at one point even correcting the Deal Casino frontman Joe Parella when he forgot a line from their song Color TV. This was all in good fun though, and the support bands received a lot of love as they built up the energy in the crowd, with fans singing along and dancing to the music.

After an hour, it was time for The Wrecks to come out and the energy in the room had not decreased a bit. The crowd had been built up to a fever pitch and they were ready to continue. As the members of the Wrecks walked on stage, the crowd exploded in cheers and the band launched into their song “Figure This Out” from their Panic Vertigo EP. I say launched into song because that phrase fits best when describing the energy that they brought to every song in their set, a level of which cannot be overstated. Lights in the back of the stage lit up in bright flashes that acted to immerse the room in an excited dynamic state as they flared over the band and the crowd. Just moments into their second song and a man shot up, crowdsurfing and having the time of his life as he was dumped on stage, before a short running start to dive back into the crowd. From song to song, the crowd did not stop moving and the energy never even came close to dwindling, on or off stage. 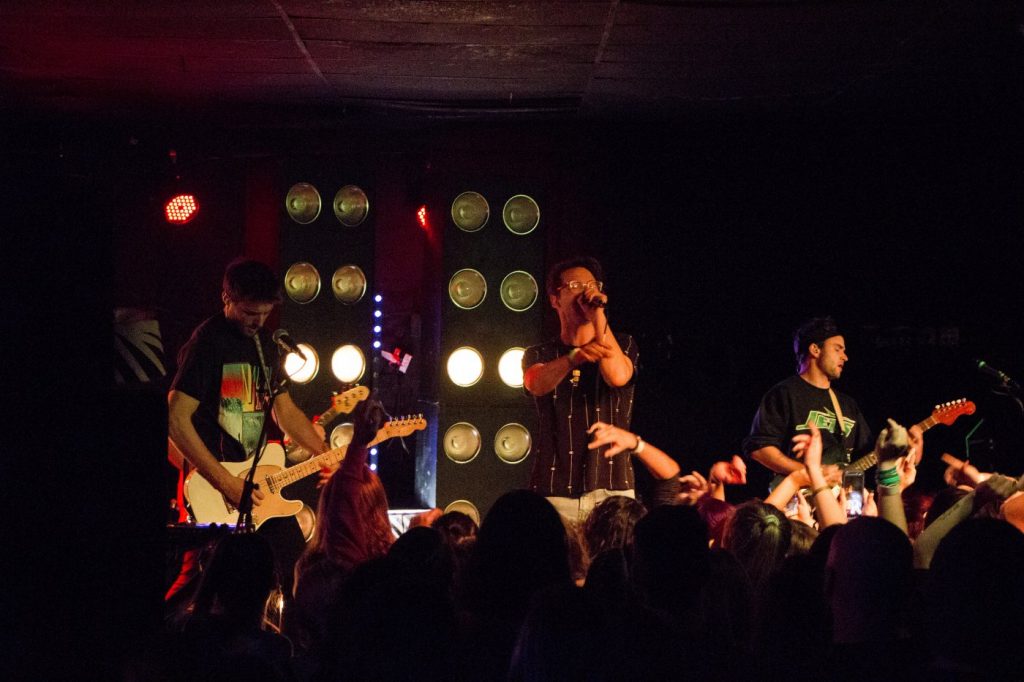 The Wrecks are an amazing band to see live. The band consists of members Nick Anderson on vocals and guitar, Nick Schmidt and Westen Weiss on guitar, Aaron Kelley on bass, and Billy Nally on drums. Every band member looked as if they were bringing their A game during the performance without sacrificing an ounce of energy, despite it being their sixth night straight on tour. Nally, although hidden towards the back behind the drum set, was a notable powerhouse. Bassist Aaron Kelley also turned heads as he headbanged to their music and moved across the stage in an incredibly stylish shirt with a University of Kansas Jayhawk on the front.

Guitarists Weiss and Schmidt matched this energy, headbanging in time to the music. Earlier in the show, Weiss confessed to being sick that night and, with other band members also confessing to being sick at some time during the tour, this only made their level of energy all the more impressive. The band members were obviously enjoying

their tour lifestyle, smiling at each other and moving across the small stage to play next to each other during their set. Anderson, not only a talented vocalist and guitarist, was a great display of the energy that The Wrecks bring as he bounced around the stage and interacted with the crowd consistently through every song. At one point, when Schmidt needed a quick break to tune his guitar, Anderson took it upon himself to entertain the audience. Asking for jokes from the crowd, performing a quick PSA about a lost phone fromone crowdsurfer, and at one point distributing a crate of water bottles to thirsty members of the audience, the crowd was kept happy and high energy. Anderson’s command of the crowd was impressive, and he managed to remain active on stage for every song, only taking a break to do a short series of acoustic tunes that were not officially out yet. These songs, although lower energy and with the rest of the band moving offstage for a quick break, did not disappoint the excited audience and were met with enormous enthusiasm. 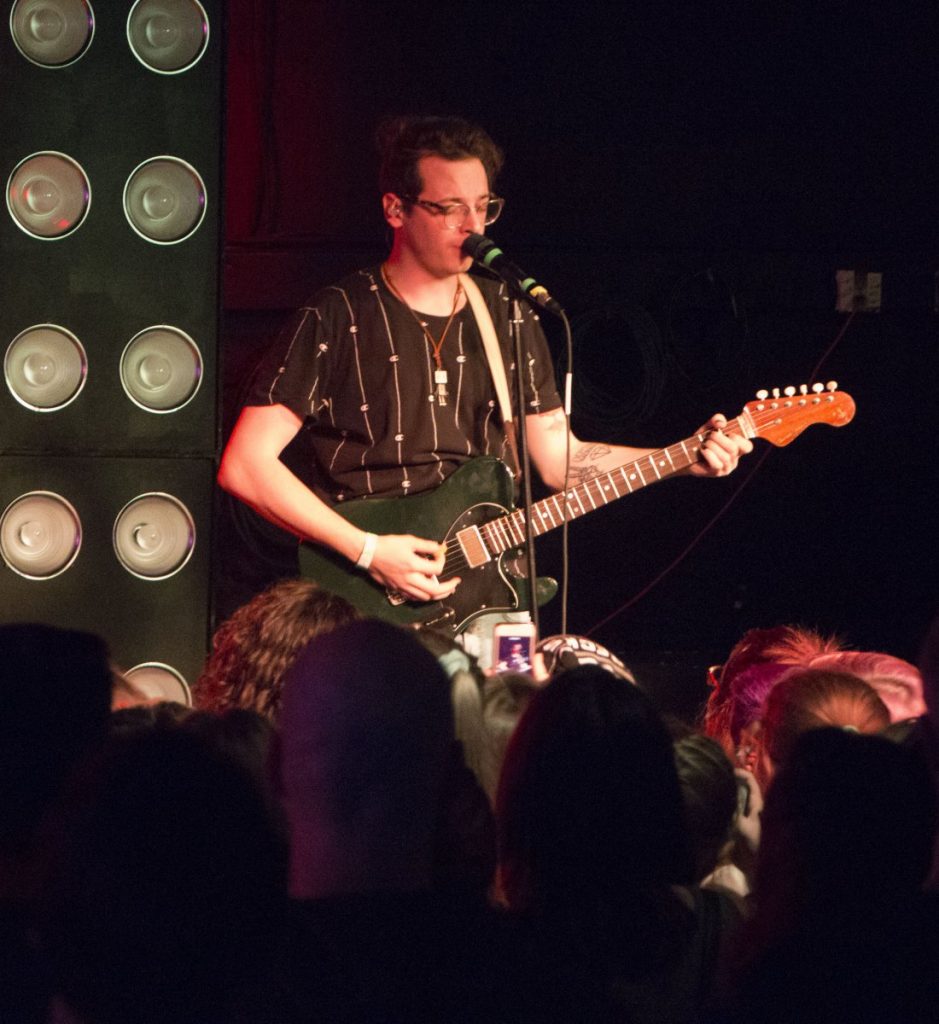 The Wrecks ended the night with an encore, one that was loudly demanded by the fans and happily delivered by the band. Even during the encore this was not meant to be low energy or a cool down, despite both the band and the crowd being tired from the all the activity of the show. Finishing with a couple songs, the band kept the music loud, fast, and great before they closed their set and left the stage for good. As I left the show I noticed all of the members from Deal Casino, Badflower, and The Wrecks hanging around to talk with fans. Before the show had started, I had spotted the band members moving around the Bottleneck, remaining mostly unnoticed by the crowd even as The Wreck’s drummer Billy Nally walked around playing air drums and even standing with the crowd for a little while. This band clearly appreciates its fan base, and knows the value of a good crowd and the energy of a set. Their music is full of bangers loaded with lively guitar riffs and drum tracks, that are accompanied by clever lyrics and Anderson’s energetic vocals. With their music style combined with the captivating energy they deliver in a live performance, The Wrecks are proving themselves to be a spectacular band, worth either going to see in person on tour, or buying their music to jam out to with friends. I’m sure that their success and fan base will only grow, and I look forward to seeing that happen. I recommend keeping an eye on this band, and if they have a tour date anywhere near you, please go. You won’t regret it, and it’ll be a night to remember. 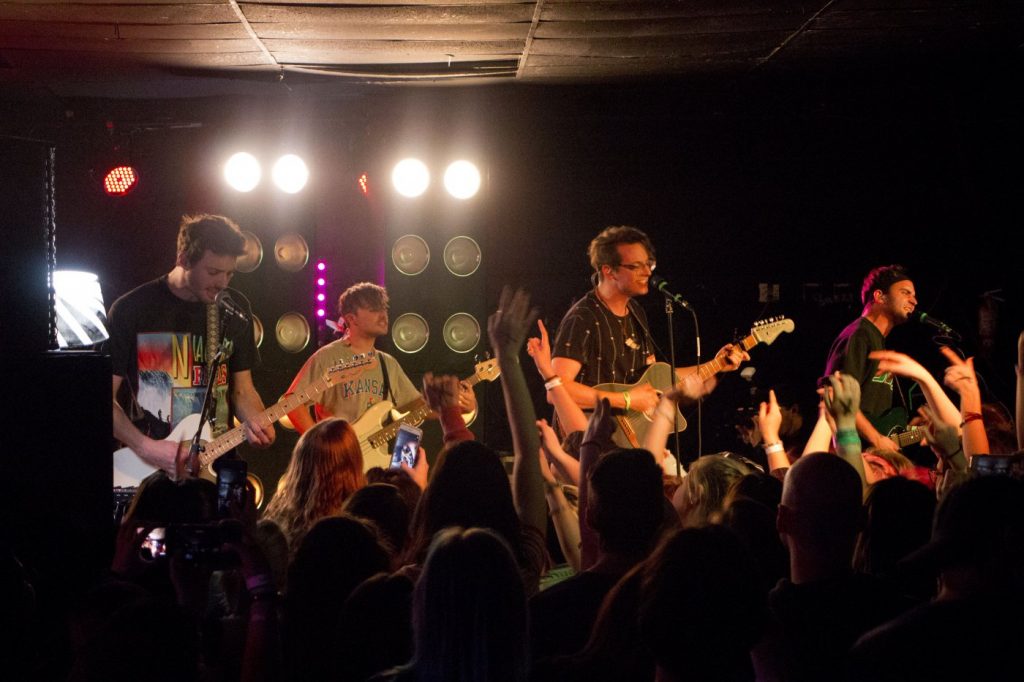