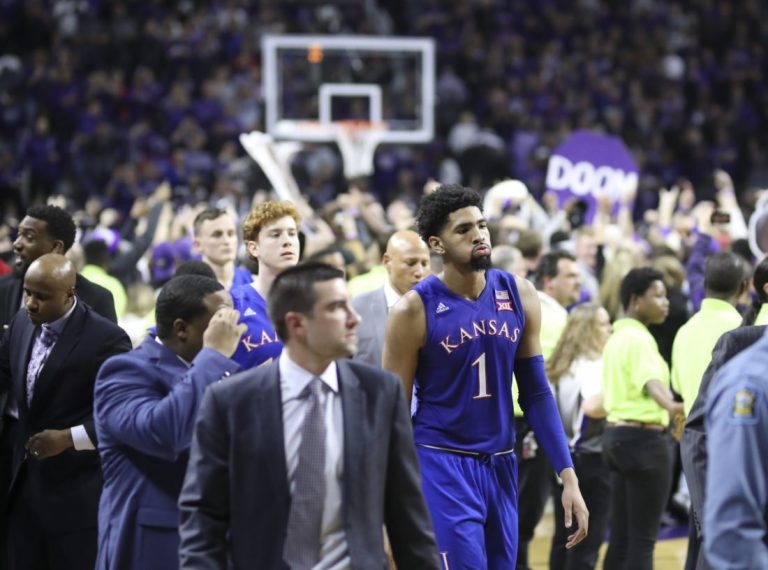 MANHATTAN, KS – The Dillon’s Sunflower Showdown pits Kansas and Kansas State together twice a year. A rivalry among two schools separated by 90 miles, but over 100 victories.

Heading into Tuesday night, Kansas State had not beaten Kansas in 1,443 days. Kansas had won the last eight meetings and owned a 26-4 record inside K-State’s own arena.

Tuesday night, things would be different. Kansas State’s three seniors, Barry Brown, Kamau Stokes and Dean Wade, had never beaten Kansas, and it was their final chance to do so on their own floor. They took advantage of it.

Known for their defense, they showed exactly why, forcing Kansas into 23 turnovers on the night, ultimately scoring 22 points off those miscues by the Jayhawks.

“It was awful,” said Kansas Head Coach Bill Self on his team’s offensive performance. “Certainly we have had other awful offensive days, but this ranks up there with the best of them in that regard.”

Despite 12 turnovers in the first half alone, Kansas managed to hold K-State scoreless for over seven minutes in the opening period. In that time Kansas amasses a 13-0 run to grab the lead before the break.

“I think they only scored four to six points in the last 10 minutes of the first half,” said Self. “We should have been up by more than three but our offense was so poor we couldn’t take advantage of it like we needed to.”

The Jayhawks recorded the first bucket of the second half before Kansas State raced out to a 9-1 run to regain the lead. The Wildcats never looked back.

“It was just a big time win for us,” K-State Senior Guard Barry Brown said postgame. “For us seniors, our coaches, our players, it was a bucket list game for us. It was our first time win. It was a game that we really knew we wanted to win for our fans, for ourselves. It was a great win.”

Kansas State defeated Kansas 74-67 Tuesday, in front of a capacity crowd of 12,528 inside K-State’s Fred Bramlage Coliseum, marking just the 5th time in the history of the venue that Kansas State was the victor.

At the end of the game; however, that number wasn’t the main story. It was dunks. Two of them to be exact.

K-State’s Cartier Diarra scored 11 points on the night, capped off by a highlight reel, windmill dunk.

“My teammates have been telling me, you have a 45-inch vertical, so use it,” said Diarra. “I really thought about going under the legs, but I wasn’t sure I was going to make it fully. I didn’t make it in warmups, so I’m just going to go with old reliable.”

The second dunk didn’t count on the scoreboard, but it counted in the eyes of the entire Kansas State team.

Back in Barry Brown’s freshman season, he recounted a dunk by a Kansas player as time expired, when KU had the game well in hand. Tuesday, Brown got his chance to repay it, and expressed no remorse at the move.

“Shout out Brannen Greene,” he said.

These two will get back together on Monday, February 25th at 8PM inside Allen Fieldhouse, where Kansas will look to repay the Wildcats for Tuesday’s loss.

Moving forward, Kansas State improves to 17-5, and 7-2 in Big 12 play, slotting them in a first place tie with Baylor, who K-State will meet in Waco on Saturday at 5PM. Kansas falls to 17-6, and 6-4 in Big 12 play. Kansas will meet up with a depleted Oklahoma State squad in Allen on Saturday at 11AM, in an effort to get back on track.

You can catch pregame festivities beginning at 10AM on 90.7fm KJHK Lawrence, with live play-by-play to follow.