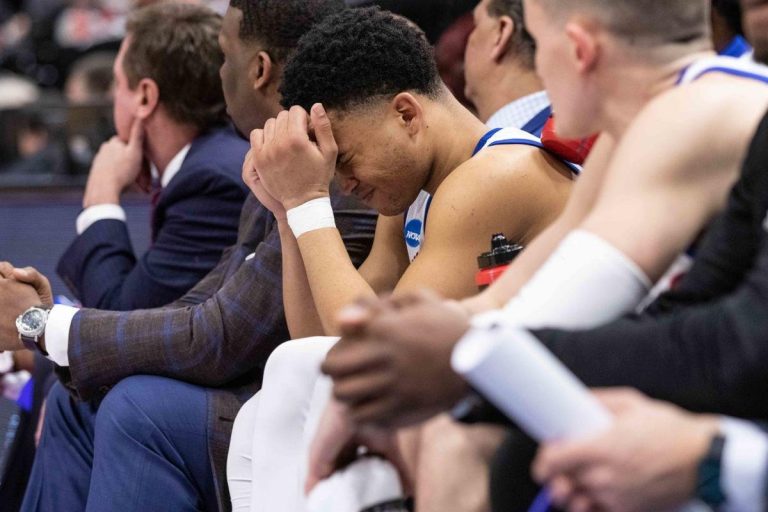 Emotion hits Devon Dotson as he fouls out in KU's 89-75 loss on Saturday night.

That’s probably the most fitting phrase to describe the quiet exit for head coach Bill Self and company from the NCAA Tournament.

“We hadn’t seen an onslaught like that all year,” said Self, who offered up bluntly honest answers during the postgame press conference following Saturday’s loss. “They rattled us and we didn’t respond very well.”

KU’s 89-75 loss at the hands of the Auburn Tigers to fall in just the second round of March Madness was one of the worst—if not the worst—performances by the Jayhawks all season. Despite a strong second half showing, a flat first half effort and a scorching-hot offensive output by the Tigers had Kansas behind by a whopping 26 points at the break and their head coach of 16 seasons plodding to the locker room with his head to the ground and body language that hinted of desperation.

Near-flawless opponent…sluggish first half performance leading to a blowout loss…does the 2018 Final Four ring a bell to anyone?

While there were many varying aspects of both games, some key statistics ended up eerily similar between the two losses:

Kansas was outplayed and—cover your ears—outcoached by Bruce Pearl and the SEC Conference Tournament Champions for nearly the entirety of the first twenty minutes in a similar way Jay Wright and the eventual 2018 National Champion Villanova Wildcats dominated the Final Four matchup a season prior in San Antonio, Texas.

The question exists though, was this flop to be expected? Last season’s Final Four dud was a bit of a wild card effort—Kansas was as good of a bet as any team to make a stab at a title as a number one seed in the tournament. This Kansas team was different, though, and really a shell of the cast that many expected would still be playing deep into March.

Think about where the program was standing last fall. Self lost three terrific, battle-tested veterans in Devonte’ Graham, Svi Mykhailiuk and Malik Newman only to reload with three McDonald’s All-Americans and several transfers eligible after waiting a season in the wings. Coming off a Final Four run, Kansas was ranked as the preseason number one team in the nation and boasted what should have been the deepest team in all of college basketball.

Entering the 2018-2019 season, the lineup outlook had a mix of both experience and potential:

The team also anticipated having Silvio De Sousa, who blossomed in postseason play of the 2017-2018 season, and Marcus Garrett, who had already established himself as the best all-around defender on the roster, both come off the bench and provide significant minutes.

Now, compare that to the group that Self rolled with in Salt Lake City:

What might not appear to be huge alterations at first glance eventually led to KU’s downfall, as starting four freshmen had the potential to either be electric or a disaster. It spelled disaster for Kansas on Saturday and led to just the sixth time in Self’s 16 seasons at the helm that the program failed to advance to the Sweet 16.

So, what went wrong?

After positive news earlier in the summer that Lagerald Vick would return for his senior season after originally leaving the program to pursue professional opportunities, Kansas was hit with an a-bomb in mid-October:

This certainly was a seismic jolt to what had been an otherwise uneventful preseason. Kansas was  the focus of a federal investigation into Adidas and its relationship with the school that ended up hovering over the program as a cloud of suspicion for essentially the entire season. The Jayhawks had lost the services of one of the key ingredients in their recipe for success and were just weeks away from tipping off the season against a top-10 ranked Michigan State team, a group eager to rebound after being bounced from the second round of the NCAA Tournament only months prior.

As the season ran its course, there were several other incidents that transformed what was supposed to be a high potential outcome season into a treacherous climb full of footfalls. Udoka Azubuike suffered a season-ending injury in early January, mirroring the same injury that cost him much of his freshman year with the program. De Sousa was officially ruled ineligible from competition for two seasons in early February. Vick left the team in a “personal leave of absence” that has still stymied outsiders with its root issue. The body count became so thin that Self was forced to pull the redshirt off of prospect Ochai Agbaji, who eventually found himself a regular starter in the rotation. Quentin Grimes, a blue-chip recruit who was ranked as one of the top-10 best prospects to ever come to Kansas in the modern recruiting era by 247 sports, struggled at a near-historic poor pace offensively and finished the season averaging less than double-digit points per game. Once a sure bet as an NBA Draft lottery selection, the freshman appears to have few options other than to return next season in crimson and blue.

Despite all the controversy and chaos surrounding the program, however, a culture was still established so as to not let adversity distract from what was needed on the court.

“One thing about these guys—my kids—is that they don’t make excuses,” said Self after Saturday’s loss. “You haven’t heard anybody say, ‘if we had this or that,’ they don’t do that.”

Players echoed that same mentality even in the wake of a short-handed, season-ending blowout, including Mitch Lightfoot.

“We don’t use [the adversity] to diminish what we’ve done,” he said. “That adversity sucks, but at the same time, next man up.”

Unfortunately for Kansas, the pool of candidates for “next man up” began to dry up as the season progressed. After lack of depth played a major issue for the 2017-2018 Jayhawks, few expected them to have any similar issues this season after stacking each position with two-to-three competent players. Alas, by March, Self’s rotation had again dwindled down to just nine players, with only seven who received consistent meaningful usage throughout the season.

For the first time in fifteen seasons, Kansas basketball concludes its season without any hardware. “The Streak” is dead. Iowa State nearly ran KU out of “Hilton South” in the Big 12 Tournament. A young, raw team returns to Lawrence empty-handed in what may go down as the most bizarre season in program history.

However, with the potential to return nearly the entire core of this year’s unit, KU has the chance to write this season off as merely an outlier. One would expect this group will return in the fall with everything to prove, a new streak to begin and a fresh crack at a season free of drama, speculation or accusation.

Jack Nadeau is a broadcaster at the University of Kansas. He can be reached at jysnadeau@gmail.com.