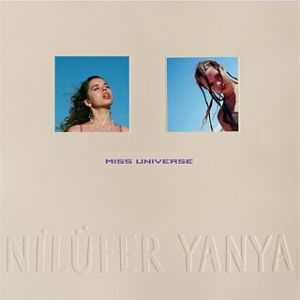 In the past two years, British artist Nilüfer Yanya has released two different EP’s, Plant Feed and Small Crimes. She continues her “cool girl” aesthetic in her debut album Miss Universe, which is a concept album that switches between elevator music with omniscient, fuzzy voiceovers and some seriously cool jams, all revolving around relatable feelings of loneliness and defeat.

There is a lot of variation in style between all the different tracks on Miss Universe, which does a lot to show Yanya’s artistic range. “In Your Head” is a gritty yet short rock bit, which segues right into “Paralyzed,” where the instrumentation drops down to just Yanya, clean plucked guitars, and Latin-ish drumset. Halfway through the album we lose a lot of the harsher guitar sounds and settle into a more spacious soundscape yet with texturally more complex rhythms.

“Safety Net” is likely the strongest track of this album. It features Yanya’s honest lyrics, rich vocals, a very present groove in the bass and drums, and lots of sparkly synthesizer. This is really where Yanya excels as an artist, “Safety Net” makes great use of synth wave and 80’s New Wave aesthetics and differentiates her from American female solo artists.

Overall, this album as a whole is equal to the sum of its parts: not only are there some awesome tracks that you’ll want to turn up the volume for on the radio, but Yanya’s abstract yet deeply profound narrations throughout (under the name WWAY HEALTH™) really tie together mostly absolute songs into a more programmatic idea. This album appeals to most tastes but still hits all of the right notes.