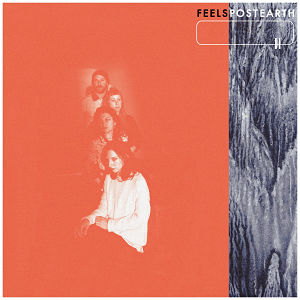 While FEELS has built their sound using elements of rock and roll, grunge, and hints of psychedelic pop, the quartet may be best described as post-punk; the punk undertones are prominent, but definitely milder than the traditional. Coming out of Los Angeles, California, FEELS, comprised of Laena Geronimo (vocals, guitar), Shannon Lay (vocals, guitar), Amy Allen (vocals, bass), and Michael Perry Rudes (drums), has been rolling out music since 2016. They most recently released their second album, Post Earth, this past February.

Post Earth displays the band’s quest for rhythm and knack for feelings, intertwining stunning vocals with anger and a dash of melancholy. Unlike their self-titled debut album, the quartet channeled noticeably more ire into this album, inspired by the social and political unrest plaguing the country. As their unique sound and approach to recording would imply, FEELS has taken inspiration from other indie-type bands, Ty Segall, and rock legends like the Cure and the Stooges.

In order to really get a feel for what makes FEELS stand out, listen to “W.F.L.” It very nicely showcases the band’s wide vocal range. “Last Chance” takes a slower approach than the band is accustomed to, but it manages to convey the album’s intended angst. Although FEELS’ sound is still quite raw, Post Earth perfectly illustrates the direction the quartet is going. They are establishing their role in the post-punk scene, and their future is looking very promising.