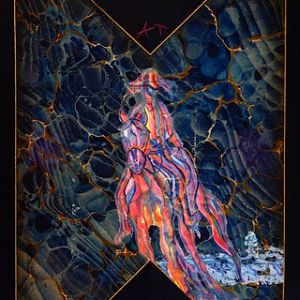 In order to better understand what Animal Collective is all about, look to Dave Portner; rather, look to Avey Tare, Portner’s moniker that he has been making music under for well over a decade. Avey Tare taps further into the obscurity that is associated with the band and allows listeners to hear a different side: one that is more intimate and colorful. Much of the Maryland native’s inspiration comes from nature and his belief that visuals can influenced through sound. Cows on Hourglass Pond, Avey Tare’s latest release, is rhythmic, intentional, low-key and very visual.

This album is more acoustic than listeners are accustomed to; but where Cows on Hourglass Pond diverges from the rest is in its use of synth mixing and abundance of vocal effects. With only ten tracks, this album is quite a bit shorter than Avey Tare’s last release, Eucalyptus; however, it carries on the same melodic theme. Although the instrumentals have toned down, many of the sounds are similar to those heard on Down There. Pullhair Rubeye, Avey Tare’s collaboration with Kría Brekkan – also known as Kristín Anna Valtýsdóttir, the Icelandic vocalist – was rather distant and distorted, similar to Split Series #16, with David Grubbs, the indie experimentalist.

Cows on Hourglass Pond perfectly showcases Avey Tare’s signature creativity and humor, heard especially in the closing track, “HORS_.” To really get a feel for the album’s acoustics, “Nostalgia in Lemonade” features intermittent sounds of guitar alongside his subtle vocals. “Saturdays (Again)” takes the speed up a notch, singing about the beauty of an adventurous Saturday. Throughout the album, Avey Tare invokes listeners to ponder their use of time through the use of inquisitive metaphors and intimate vignettes; Cows on Hourglass Pond is yet another dreamy reflection of existence.