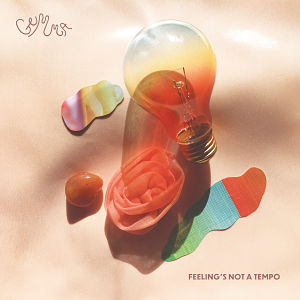 Gemma: Feeling’s Not A Tempo

“We’re gonna keep on dancing,” Felicia Douglass sings on top of a jazzy, funky beat with a rock backbone, and if Feeling’s Not A Tempo by Gemma is on your radar, then that’s precisely what you’ll be doing this summer. The Brooklyn-based band’s most recent release is a truly unpredictable and exciting album. The use of saxophone and upright bass bring songs like “Keep On Dancing” and “Out In The Open” into the realm of jazz, while songs like “Love Like (Knock It Off),” the boisterous opening track, and “Love Trade” are doused in funk. “Strings” is a beautiful interlude full of strings (duh) mixed with synth. The rest of the album is a fusion of electronic, pop, and psychedelic sounds, making this record a conundrum for anyone trying to pinpoint a specific genre.

However, what really sets Gemma apart is the beautifully unpolished vocals of Felicia Douglass, which remind you that you’re listening to a real person who is singing from a true and genuine place. The lyrics appear to come from a sense of confusion and a lack of understanding. Many of the songs seem to be about two lovers unable to reach each other, both physically and emotionally. This gives the album’s title, Feeling’s Not A Tempo, extreme validation because the lyrics convey the idea that feelings are not set in stone, and are always subject to change (especially in a rocky relationship), which complements the constant unpredictability of the music. Another contributing factor is Douglass’s use of many different vocal approaches throughout the record. She mostly sings in a beautiful head voice, but then switches to her impressive lower register, adding an element of jazz. Additionally, during tracks like “Luxury Portfolio” and “Miss U,” Douglass uses spoken word intertwined with her vocals, creating a very raw, unfiltered sound.

Feeling’s Not A Tempo is an album of surprises and excitement. You can dance to songs like “‘Til We Lose Feeling” and then cry to the last track, “Am I Less.” Whether you want a summer full of tunes to dance to, or one that’s full of emo jams (or both!!), this new release by Gemma will make your dreams come true.