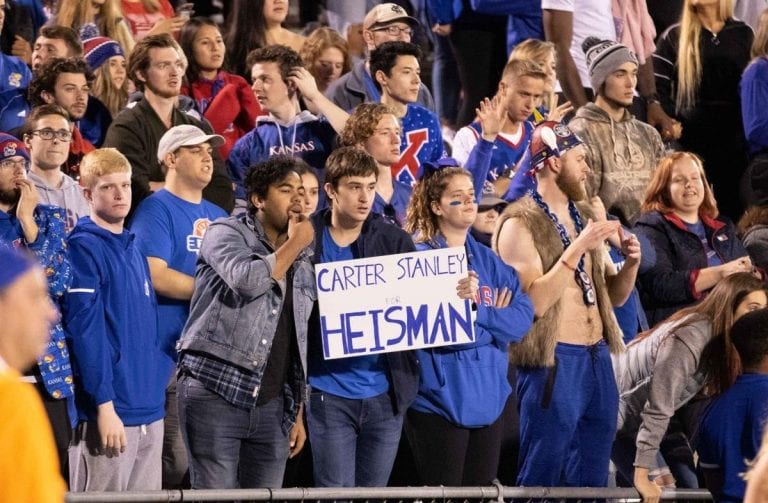 Today at 2:30 CT that will be a completely different story.

Tomorrow KU and Kansas will square off for the 117th time in the Dillons Sunflower Showdown inside David Booth Kansas Memorial Stadium.

Both teams are coming into The Booth riding on a ton of momentum looking to keep capitalizing on it. The Jayhawks beat the Texas Tech Red Raiders 37-34 last week off the foot of a last second 32 yard field goal try by Liam Jones.

This came after their first kick was blocked and recovered by Texas Tech, but instead of running out the clock and sending it to overtime they tried to lateral it back and Kansas got a hand on it and then recovered setting up the game winning kick on the very next play. The week before that Kansas left with the exact opposite result as Cameron Dicker hit a 33 yard field to win the game 50-48 for the Longhorns.

The Wildcats headed into the Oklahoma game with a close win against TCU after two crushing losses at the hands of Baylor and Oklahoma State. Against Baylor and TCU, Kansas State didn’t have more than 7 points in one quarter, but that quickly changed as against Oklahoma they scored 17 points in two consecutive quarters in a game in which Oklahoma wanted to put on cruise control like they did the year before beating the Wildcats 51-14. It looked like the Sooners would do just that after gaining a quick 10-0, but then after trading touchdowns on four straight possessions Oklahoma saw that lead dwindle to just up 17-14 with 12:12 left to go in the half with Skyler Thompson and Joshua Youngblood running in both of Kansas State’s touchdowns. The third quarter is when things really got away from the Sooners as the Wildcats blanked them in the score column 17-0 taking a 41-23 into the fourth quarter. Things really then to take a dramatic shift as the Sooners went on a personal 18-0 run of their own doing with their greatest weapon Jalen Hurts in the air and on the ground and capping it with a Gabe Brkic field goal.. This is where controversy struck. On the ensuing kickoff, it seemed as if the Sooners got the recovery, but they said it touched an Oklahoma player before it went 10 yards leading the Wildcats to get the ball back and run out the clock giving the Wildcats their first victory over Oklahoma since 2014 when they won in Norman

Pooka Williams Jr: After being held relatively quiet in the first quarter of the season unable to go above 100 yards getting 99 yards against Coastal Carolina, he reached that mark in back to back games against both Top 20 opponents Oklahoma (137) and Texas (190). In order for the Jayhawks to stay in stride with the Wildcats they have to get Williams involved early and often as only six teams in the FBS give up more yards per run than the Wildcats.

Carter Stanley: In the last game against Texas Tech, Stanley threw for a season-high 415 yards, which the last time he threw for over 400 yards was against Kansas State in 2017 in a game they lost 30-20.Also over the last five games Stanley has thrown for 725 yards which is the fifth most yards in the country during that time. In order for the Jayhawks to open everything out they have to keep the deep ball outlet open to keep the ball moving down the field.

James Gilbert: In three of the five victories that the Wildcats have had Gilbert has gone over 100 yards and totaling 450 yards. In their two losses he only had 138 yards combined. If the Wildcats want to keep the domination going they have to exploit the Jayhawks run defense that averages giving up just about 172 yards per game.

Malik Knowles: Dalton Schoen may have the most receptions on the team, but Knowles is without a doubt the biggest big play threat at wide receiver the Wildcats have averaging just under 15 yards per reception and 224 yards total on 15 receptions eight less than Schoen’s 23. Having only 100 yards on 10 receptions all of last season it is clear he is a huge factor in the Wildcats success moving forward and in order to counteract KU’s big play threats of their own in Andrew Parchment and Stephon Robinson, Knowles is going to need to have a big day similar to the 5 receptions for 99 yards he had in the second game of the season against Bowling Green.