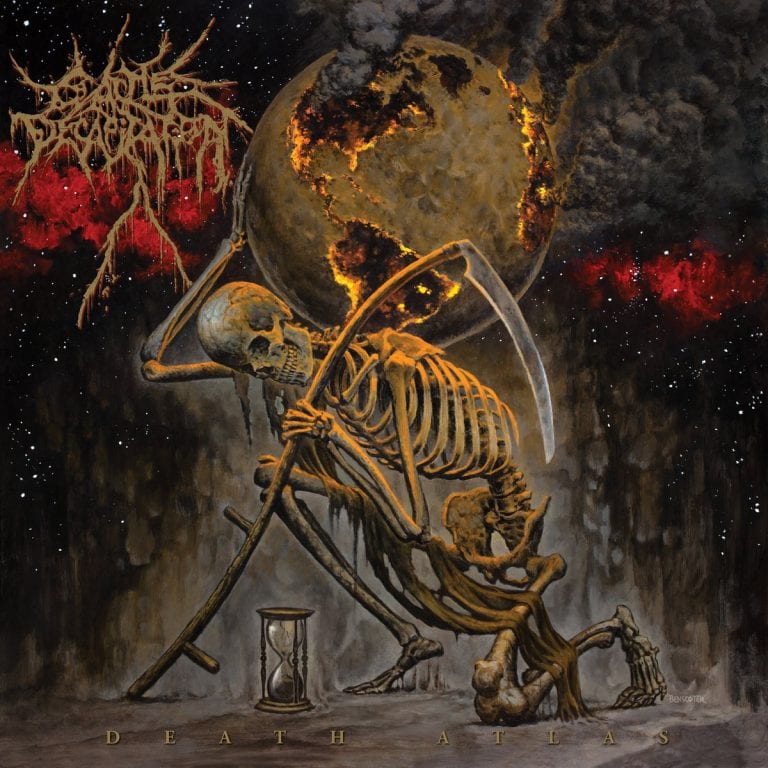 Death/ grind metal outfit Cattle Decapitation have returned in 2019 for their eighth studio album. This album continues off the style of their previous two albums, 2012’s Monolith of Inhumanity and 2015’s The Anthropocene Extinction, as well as continuing the themes of these past projects — these themes being the man-made destruction of the planet. Cattle Decapitation are now and have always been one of the most outspoken bands, both in the grind and death sub-genres and in the entirety of metal, on animal rights, environmentalism, and anti-industry messages. It was no coincidence that this record was released on the most pro-corporate day in America, Black Friday. Death Atlas continues the protest and fight against humanity’s wrongdoing, and it is as grim as ever. While Death Atlas is intense and energizing, it is a bleak affair with a wide scope, predicting a destructive future for mankind.

Opening with “Anthropogenic: End Transmission,” the first of about 4 sample interludes along the album, listeners are introduced right off the bat to the pessimistic point of view of Cattle Decapitation. A vocal sampling of cycling international news reports all discussing the problems of climate change and global warming begins with static paired with vintage radio distortions, and we hear the magnitude of the problem, the inconceivable universality of our suffering. This is thematically similar to each of the interlude,s with the second interlude, the perhaps most eye-opening and disheartening of the lot, “The Great Dying Pt. 1,” showcasing a semi-robotic, inhuman voice describing the “planet earth’s sixth mass extinction.” Understanding the themes of this album is important for the overall experience of Death Atlas. The music within the project is a journey and a story of self-destruction that ties so deeply into music itself that to ignore the messaging would be to ignore every drum beat and guitar riff.

The first real song off the album, “The Genocide,” opens with raging drum beats by the immensely talented Dave McGraw and the first instance of the wonderfully vile goblin vocals by Travis Ryan screaming into existence (a primal feeling of pain and anguish), all the while a kick ass guitar riff plays in the background. As the song progresses, we hear Ryan’s well-performed growl-style vocals, deep and demonic, harmonizing with the goblin vocals. They sing of death and destruction: “Apocalypse / Sudden death of a metropolis / We fucking needed this.” The rapid grindcore style drum beats push the song straight to a climactic ending of “Fuck the future, fuck all mankind,” growled out in pure unadulterated rage. “The Genocide” works as an amazing album opener for its ability to introduce so well the musical aesthetic of Death Atlas. This album is a little more stylistically technical than the last two albums in this series, Monolith of Inhumanity and The Anthropocene Extinction. The music feels matured and meticulous in such a satisfying way that it makes Death Atlas a quick listen even with its 55-minute run time. Also, on display more fully on Death Atlas are the goblin vocals that appear on most, if not every track on the album; however, they will be discussed in more length in a bit. “The Genocide” also does a great job of displaying the scope of the record. Cattle Decapitation is asking you to look at the forest and not the trees on this project. “The universe, it always finds a way to purge… and to the ashes and the ground we are returned” is a great example of the scope of this record. No longer can humanity focus on individual causes but accept that our time is up and that we have caused our own destruction.

This is explored in more depth in the lead single, “One Day Closer to the End of the World,” which opens with a screaming guitar riff performed by long time Cattle Decapitation guitarist Josh Elmore and mirroring drum beats before the deep growl comes in. Our own self-destruction is described in distraught, hopeless lyrics such as, “Us humans never learn our lessons, possessed with deep aggression, self-hate – the great depression, confessing love for the end…” Throughout the song, the goblin vocals and the demonic deeper growl harmonize with one another, compliment one another, and replace one another as the track moves along. The chorus is done entirely in the goblin vocals whereas the bleak verses are shouted out in the growl style.

The album progresses at a quick pace, carried along by the instrumentals and a rich, fulfilling production that gives immense clarity to the instruments and allows them room to breath and develop. This is a highlight for Death Atlas as it gives every member of Cattle Decapitation the ability to display their talent and purpose within in the band, which now showcases both Belisario Dimuzio as a dedicated member of the band as a rhythm guitarist (previously he was just a touring member) and new bassist, Cryptopsy’s Oliver Pinard, all of which is done on the lead up to the final song, the title track: “Death Atlas.” The song “Death Atlas” is a glorious 9 minute closer that follows the lead of the rest of the album with bombastic drums and stellar guitar riffs, and again there is a harmonious coupling of the clean and growl vocals. More so on this track than on any other, the guitar riffs are epic in scope and intensity; that is because “Death Atlas” is the most conceptually-driven track on what is already Cattle Decapitation’s most conceptual album to date. The lyrics are a final ending and the length of the song lends itself to a stellar instrumental development that changes up just over halfway through the song to refresh the track and truly close the album off. As the initial instrumentals play on, they began to slow down, and the drums become less heavy all up until they fade off completely. When I first heard the track as a single I immediately thought that the song was over, but then out from the ashes arises a doom metal-like sound that picks up in intensity until it eventually fades into nothingness as the album closes off.

All in all, Death Atlas is a damn good death metal album, and whether someone likes it would come down to taste and personal preference. Whether or not one likes the goblin style vocals and their consistency throughout the album is one point of contention. However, I personally love the sound of these vocals and have been very welcoming of them. In past albums featuring their use, they were more sparing, perhaps used more deliberately or perhaps to test the waters. Nonetheless, to this reviewer, the vocals never overstay their welcome. I also love the more technical instrumentals that Death Atlas displays, quite especially the high-powered drums. This is a must-listen album to any death and or grind metal fan or any music lover in general who is looking for both aggressive, mature instrumentation and politically-driven, grim, environmentalist messaging. Death Atlas is such a powerful record, one that is brutally honest and thought-provoking, a near-anxiety-driving tour de force.