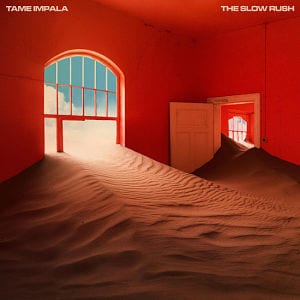 2015 saw Kevin Parker, the multi-instrumentalist musical mastermind behind Tame Impala, explode into the mainstream with his most refined album yet: Currents. The album was met with widespread critical acclaim for its sonic creativity, psychedelic production, and catchy melodies. Currents featured Parker experimenting with different genres, and while it featured a more synth-heavy sound, the album still paid homage to the gritty psychedelic garage rock found on his prior albums, Innerspeaker and Lonerism, at times. Needless to say, fans and critics alike were eager to see where Tame Impala would go next. A grueling 5 years elapsed before Parker announced that his latest project The Slow Rush would be arriving in early 2020.

The Slow Rush serves as a psychedelic, dancefloor-inspired exploration of time. Parker builds off some of the more synth-heavy and traditional-pop songwriting found on Currents and takes it to the next level, with one danceable song after the other. Don’t let this album’s glimmery (see track 11) upbeat-ness fool you; throughout the album Parker addresses heavy themes such as the uncertainty of the future, longing for the past, and forgiveness. Despite these complex ideas, The Slow Rush finds Parker in a much better place than Currents and Lonerism, as it explores newfound love following his engagement and marriage to his wife in 2019.

The hypnotic opening track “One More Year” introduces the theme of time that will be explored throughout the album. On this song, Parker attempts to combat his uncertainty towards the future by championing the idea of taking life one year at a time. “Instant Destiny” follows, a meditation on his engagement and his feelings of eternal love at the time. On “Posthumous Forgiveness,” Parker sings about his conflicted relationship with lines like, “you decided to take all your sorries to the grave.” This bitterness turns to longing just over halfway through the song. After a brief segway into a new, ethereal sonic landscape, Parker expresses his desire to be able to share his life and music with his deceased father. Fittingly, the next track, “Breathe Deeper” serves as a personal mantra for getting through difficult times. Parker delves into the dangers of nostalgia and accepting the present on “Lost in Yesterday” and “It Might Be Time.” The final track, “One More Hour,” is perhaps the most emotional song on the album. It returns to the uncertainty explored on the opening track but explores it with more ambiguity, touching on themes of love, and Parker’s desire to remain true to himself as time progresses.

Sonically, The Slow Rush showcases Parker’s roots as a percussionist. The album features rich, intricate drum grooves and tasteful conga rhythms — expertly produced by Parker himself. Parker also experiments with 80’s disco-style pianos, acoustic guitar on several songs, and even a flute on “Borderline.” The Slow Rush certainly feels more accessible as compared to previous albums; this is Tame Impala at their (his) grooviest, with a myriad of infectious melodies and hard-hitting bass lines on tracks like “Breathe Deeper” and “Lost in Yesterday.” While The Slow Rush sees Tame Impala moving further towards a more commercial-friendly sound, the album contains enough classic Tame Impala effects and psychedelic-rock elements (see “One More Hour”) to appeal to fans and casual listeners alike. Furthermore, Parker’s insight into the nature of time provides a narrative to which we can all relate.

Recommended If You Like: MGMT, Unknown Mortal Orchestra, Pond
Recommended Tracks: 3 (Borderline), 5 (Breathe Deeper), 8 (Lost in Yesterday), 12 (One More Hour)
Do Not Play: None
Written by Josh Rubino on 03/02/2020