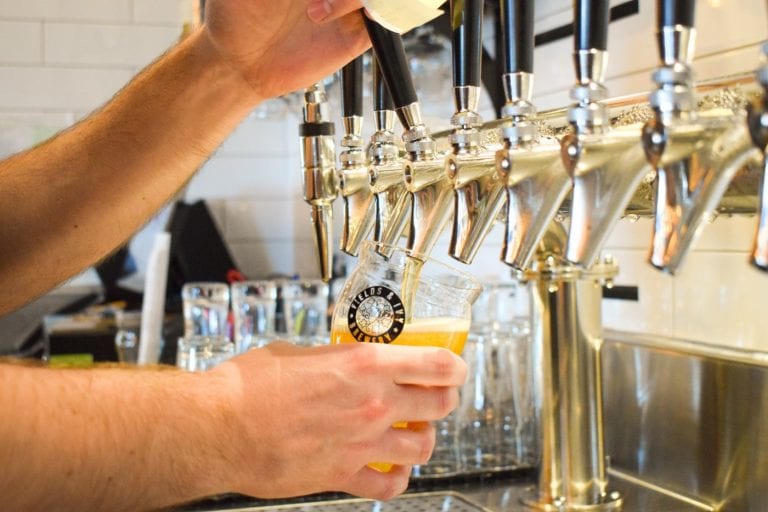 Community and beer; celebrate Fourth of July with local brews

A recent poll by Grill Cook Bake on the most popular light, macrobrewery beers, found the majority of Americans, “would not drink any of these [beers] ever.” 35% of Kansans polled, voted in this category.

Brewmasters and owners at several Lawrence breweries weighed in on the importance of beer in American tradition and suggested their favorite brews to throw back while the fireworks crack.

Brewmaster Dan Chivetta and brewer Conner Stefanik at Fields and Ivy Brewery, suggested their Worboys American lager. While lagers originate in Germany, Stefanik said the brew was supplemented with corn and rice when brought to the United States because American barley didn’t bring the same flavor as it did in Germany.

“It’s American in that it follows most of the German American roots,” Stefanik said.

“It’s one of those styles we do that doesn’t have any audience anywhere else,” Chivetta said.

Stefanik said he got into craft beer because of its community. He said drinking beer presents the opportunity to sit down and talk to people about the beer, but also about one another.

“Fourth of July is a time to sit down and be a community,” Stefanik said. “That sense of togetherness is what I think about with beer.”

Matt Williams, a co-founder and president of Lawrence Beer Co., also said he finds a sense of community in craft beer. Williams said to him, craft beer is a culture that breeds personality and creativity.

“It’s full of a bunch of people who quit what they were doing to do something they’re passionate about,” Williams said.

And isn’t that, in part, the American dream?

Williams also picked a lager as the brewery’s American essential; specifically, Lawrence Beer Co.’s Cruise Master lager. Williams said growing up he and his family would visit a small lake every summer, and at the turn off sat an old, rusty RV. Its make: Cruise Master. Williams said going to the lake always made him think of summer, and now the brewery releases the lager at the start of each summer.

“We want it to come out every year just to celebrate,” Williams said. “Summer, is here.”

What will you be drinking this weekend as you celebrate Independence Day? Williams said he might have some Cruise Master, but that he also has some summer beers stashed from his friends in the craft-beer community. Stefanik said he saved a couple of cases of Fields and Ivy’s, now sold out, Canoe Club to drink this weekend. From back in his office, Johnston yelled that he was taking a keg of Breezedale (Fields and Ivy’s Hazy IPA) out to the farm.

The bottom line: beer is the tradition because of its community. It doesn’t matter which one you drink.

Lawrence Beer Co. will be closed on the Fourth of July.

Multiple attempts were made to contact brewers at Free State Brewing, but were unsuccessful before the time of publication.