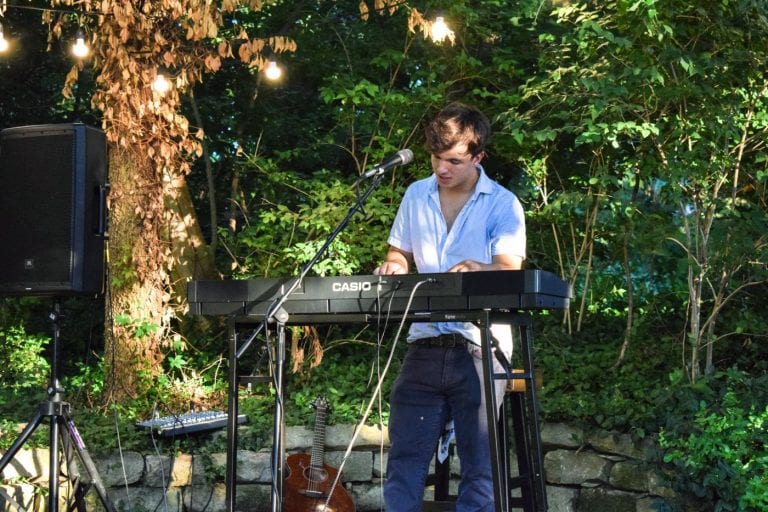 Under twinkle lights and tree shade, Uplift Coffee in North Lawrence invites customers to sip a cool drink and enjoy an acoustic performer every Wednesday night.

The tables are spaced apart and masked employees run drinks to customers who sit and enjoy an evening that, almost, feels normal. Owner of Uplift Coffee, Kelli Huslig said she wanted to create just that, an escape for the community and local artists.

“We understand that people are needing a little bit of escape,” Huslig said.

The coffee shop, located at 624 N. Second St., started hosting live music on the first Wednesday of June. Assistant manager and marketing director Krys O’Brien said Uplift has been hosting the event every Wednesday since.

O’Brien said the response she’s seen has been great. The community seems excited to have a place to safely gather and enjoy live music.

“It’s been great for the soul, for everybody,” O’Brien said.

The small concerts usually draw a crowd of around 20 to 25 people according to Huslig. The state of Kansas remains in Phase 3 of the Ad Astra Reopening Plan, which discourages gatherings of more than 45 people. Because the live music business is largely built on the volume of attendees, many venues and spaces have been unable to host events since the start of COVID-19 regulations.

Huslig said the weekly concerts at Uplift are by no means a profit driven event. As a new business owner (Uplift opened in January of this year) Huslig said she’s been grateful for the support from the Lawrence community. These concerts are her way of giving back to the people who support her.

“This is not something where I’m making money,” Huslig said. “But I kind of feel this is a way for me to give back to the community.”

The Wednesday nights spent on this patio highlight the need for live music and community in Lawrence. Even the performers agree it’s important to have these events and they gladly perform in return for gift cards to the shop.

Max Indiveri, who performed last Wednesday, said he was skeptical at first to accept payment this way, as he’s used to getting paid in cash. Indiveri said once he realized Uplift was a new business and hosted the events to support the community, he was on board.

“I was just super excited to [play] because it was my first show in about three months,” Indiveri said.

Before the pandemic caused most live event spaces to close, Indiveri said he would perform several times a week and was used to having that income. The University of Kansas sophomore from Overland Park, said he now spends most of his time writing and recording music, though he said the profits from streaming are slim.

Indiveri asked for “COVID-free tips” at the event, volunteering his Venmo username so audience members could safely support his work.

O’Brien said she wishes they could pay the musicians more, but she’s grateful to have the events where people can gather outside and socialize while still supporting local music.

As Indiveri played both covers and original songs, a toddler splashed around in the patio’s outdoor water feature, and the train whistle blew its familiar toot as it came through North Lawrence. For a moment, it felt like a normal Wednesday night. The scary reality of living in a pandemic was almost forgotten.

Uplift Coffee features a different artist on its patio each Wednesday from 7 – 9 p.m.