Zines: the ultimate therapy and freedom of expression

At Wonder Fair, near the back of the store, two racks display zines with titles like “10 Hot Sax Positions,” “Flowers from My Yard,” and “Cool Wizard Zine.” Some are printed on cardstock, some are typed, but most include original content written and drawn by hand. Wonder Fair is one of the only shops in town where Lawrencians can find these niche texts.

The wide variety of titles and topics is a common trait of the zine medium, which has exceptional potential for freedom of expression. Zines are short, self-published handmade magazines, usually in small circulation and most often reproduced by photocopying. They emerged in the early 1900s and since then have been a part of many underground social movements, including the punk rock and punk feminist scenes.

Wonder Fair has sold zines since its start in 2008, when it was owned by Eric Dobbins and served primarily as a gallery exhibition space. After the 2015 move to the new location at 841 Massachusetts St., its zine collection grew. Wonder Fair owner Paul DeGeorge said about 40% of the zine rack is local, and many zine makers get their start by simply coming into the store and asking if they could sell their zines at the shop.

One zine maker featured at Wonder Fair is 10-year-old Lorelei Dunn, who made a zine called “Paw Pals,” documenting fictional letter exchanges between cats in the stores downtown. She gets paid in store credit. DeGeorge said that’s exactly the kind of hyper-local and specific content that they like to feature at Wonder Fair. 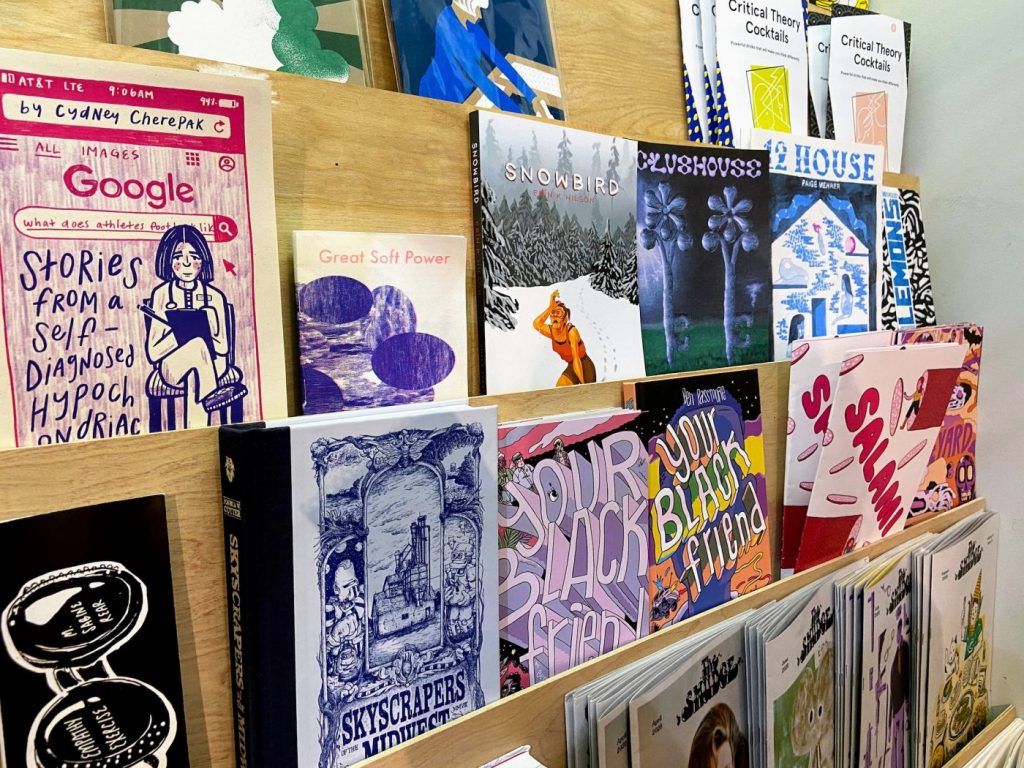 An array of zines take up two zine racks at Wonder Fair, an art supply and print store located at 841 Massachusetts Street.

“That’s what I love about zines,” DeGeorge said. “It can be a real mix of heavy and poignant stuff and also goofy, weird stuff. And some of that comes from the same people.”

Anita Patel, a graduate student at KU, visits Wonder Fair often and said she appreciates how she can find original content on the zine rack she wouldn’t find elsewhere. She compared zines to chapbooks, short poetry publications which allow readers to access an author’s content in smaller doses.

“It’s a way to introduce yourself to an artist you might not have known,” Patel said. “You can take the first step. It’s like a gateway.”

Megan Williams is the Assistant Director at the Emily Taylor Center for Women and Gender Equity, as well as a zine maker and enthusiast. Williams was first introduced to zines by her friend Ailecia Ruscin, who was part of the riot grrrl feminist movement and donated her zine collection to Duke University. Some hard copies from that collection are also kept at the Emily Taylor Center.

Williams said that mass media often perpetuates systems of oppression, and self-published zines can work against that, giving voice to people who are silenced. In a case study of the People of Color Zines Project, a University of London researcher found that 76% of zines discussed racism or race, 68% discussed feminism or sexism, and 56% discussed sexuality or gender identity.

The Emily Taylor Center hosts a virtual zine club, which Williams said is crucial to her mental health while being isolated because of COVID-19. The club meets on Wednesdays and has a different theme each week, like “Coping Mechanisms in Times of Crisis” and “Hallowzine Night: Remains of the Day.”  Williams said everyone is welcome to join, even if they don’t see themselves as an artist.

“Zines aren’t just for artists,” Williams said. “They’re a great vehicle for artists, but zines really are for everybody and there’s no wrong way to do them.”

With few supplies necessary, zines are an especially accessible medium for non-artists to explore creatively. Even if a zine turns out strange, DeGeorge said specific and “weird” content is what the zine rack at Wonder Fair is all about.

“The best thing about it is there’s no gatekeeping,” DeGeorge said. “If you want to publish it, publish it.”