Action Bronson: Only for Dolphins 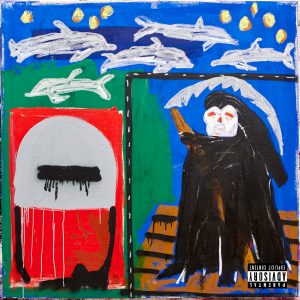 Hailing from Queens, New York, Ariyan Arslani, better known as Action Bronson, presents his sixth official LP, Only for Dolphins, which gives an untainted view into Action’s life, pleasures, and trepidations. The rapper, songwriter, producer, director, actor, and chef has plenty of experience in different avenues of enjoying life and isn’t afraid to provide an uncensored view on showing others how to do the same. Through his cooking show on Viceland called “F*ck, That’s Delicious” or his appearance in The Irishman, Arslani has been expanding his name in numerous entertainment fields. In addition to his role in The Irishman, Arslani was cast in Game Over Man! as well as 2020’s The King of Staten Island. Arslani’s “jack of all trades” mindset to life, which he references throughout his album, really puts him as an emerging artist in a select group that includes the likes of Donald Glover, Will Smith, and a few others.

In Only for Dolphins, Arslani reaches out to a spectrum of beat makers like The Alchemist, Budgie Beats, Yung Mehico, and many others, making Action Bronson the lead on all the tracks. The variety of contributions gives a jazzy yet Caribbean style of sound to the album, while delivering good bars and solid beats. Bronson also utilizes dolphin clicking in most of his tracks saying in an interview that “The dolphin is one of the most intelligent creatures ever created … they have their own way of communicating … they have nuance and intangibles like we do”. Using dolphins’ intelligence as some sort of inspiration, Bronson also released a new “Splash” cologne, stuffed animals, and even a new flavor of ice cream.

On the album Action Bronson uses just three listed features who includes Yung Mehico, Hologram, and Meyhem Lauren, who are used mainly for instrumentals like the saxophone solo at the end of Bronson’s first track “Capoeira”. This allows for Bronson to go virtually interrupted on his tracks, spilling bars about drugs use, partying, sex, and other vices. Tracks like “C12H16N2” (the chemical formula for DMT) and “Latin Grammys” feature Bronson accentuating these dirty pleasures through stories of mad trips and his ability to pull women. “Splash” can be summed up as an ad for his new fragrance of the same name, however the following track “Sergio” has more depth where it seems that Action Bronson contemplates whether constantly feeling good with drugs and women is really what he wants in life, repeating “feeling good’s all I know.” On his second longest track, “Marcus Aurelius”, Bronson references the last of the 5 good emperors to reflect on how Bronson himself is becoming more of a stoic person, rapping “if I had a watch, I’d probably throw that sh*t in the river” and “half a milli just a shiver” showing his nonmaterialistic view and his lack of attachment to money, which he references throughout his album.

Fun and vibey, Only for Dolphins has a smooth mix between jazz and reggae while also providing Action Bronson smooth beats to deliver his bars with a punch. Using a wide range of sounds and other artists, Bronson goes deep into his bag of musical talent to shape this album into a fun and boastful story of how he is living life. Only for Dolphins adds another milestone to Bronson’s musical career, while also expanding his expertise in other areas, cementing him into a role of an ultimate entertainer.