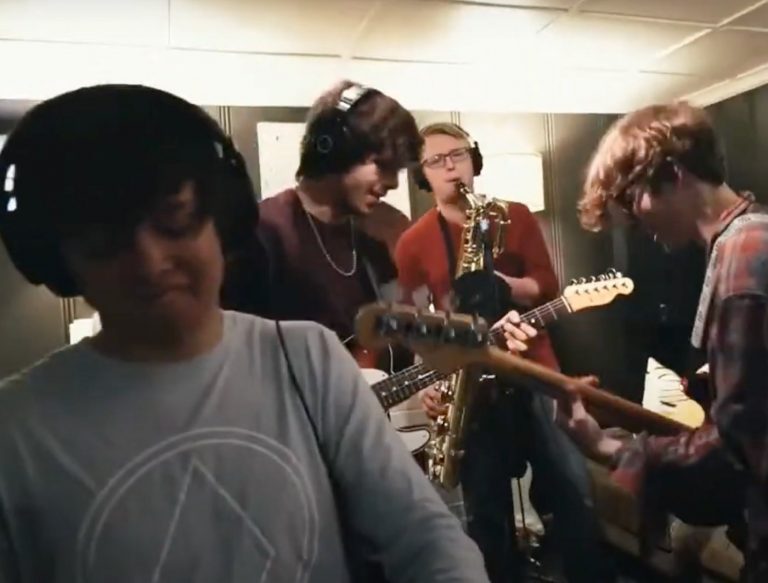 Q: Take us back to the beginning of your guys’s group, how did you form? When, where, what was all that like?

Quinn: You know, it was about, I think the year was 1870 when a fallen star came and that fallen star contained The Whips. And for centuries, different people have been taking on the mantle. And now it’s our turn.

Max: Yeah, it’s like the Power Rangers and we’re like the Dinothunder version. Which is like by far the worst in the series, but we’re still The Whips.

Quinn: Yeah, we were chosen and we’re taking it in a bit of a different direction. Yeah, it’s a different season, but you know, the end credits are alike.

Max: Yeah, the last Whips used to be a polka band. It’s kind of wild. That’s how we formed.

Max: That’s our story and we’re sticking with it.

Coop: Say you’re not going to tell the story of how you and miles were on the same bus and you were like, oh, let’s play instruments together.

Quinn: That’s a story that I tell people. But I mean, if we’re really baring it all out for Farmer’s Ball… I mean, we might as well tell the real one.

Coop: Yes, tell the real one.

Quinn: You heard it here first.

Q: So speaking of farmers ball, what led you guys to decide to participate?

Max: Yeah, I saw that it was on Minecraft and I’d been notoriously a crafter for a while. Full-Time crafter, part-time band member. And so I couldn’t pass up that opportunity,

Max: And when we saw what we could win, [holds up a glowing Minecraft sword] we saw that this was the prize. We just couldn’t help ourselves. And so, you know, the rest is history. We got the boys down in a basement for days at a time with limited food and water. And we came out with the Farmer’s Ball entrance and y’all were kind enough to vote for us. Now, at least I’m assuming some of y’all were kind enough to vote for us.

Quinn: It was a grueling process to get all those diamonds to beat the inner dragon, but we did it.

Coop: You know, I didn’t even vote for us. Sorry.

Q: So what was it like participating in Farmer’s Ball remotely? How did that, you know, go through your guys’ heads?

Max: We were actually all separate for the final night of Farmer’s Ball. We were together for the first one. So we all voted for ourselves. And then for the final night of Farmer’s Ball, I think Miles and Coop were out of town like in KC because we’re all initially from KC. So we traveled back and forth. And that’s also where we recorded the video for Farmer’s Ball too. Um, but yeah, me and Quinn just went on like a campaign to get everyone we possibly knew to vote for us. And we were really, really persuasive.

Quinn: We knocked on doors, we waved down buses.

Max: We had some dirt on people.

Quinn: We were on the rooftop. And we did a little bit of blackmailing,

Quinn: But we won.

Max: Yeah, I mean, we did it. I mean, the sword speaks for itself, you know, with all those colors. I mean, the things that I would do for that sword.

Quinn: The things you have done for that sword.

Q: So, again, continuing off of what you guys said you did win, so how does it feel?

Coop: I feel like a rock star you know?

Quinn: It feels pretty good! I mean it’s a surreal feeling but I mean the next step I think is Jake Paul.

Coop: I think the next step is to open Saturday Night Live, honestly. That’s it.

Max: Yeah, Jake’s been fighting a lot of not boxers, but he has yet to fight an entire band.

Quinn: Yeah so I’d like to see him step up. So I think you know, Ben Askren took a dive. Jake, where you at?

Max: Yeah, we’re using our platform. Jake. We’re all wildly wildly affluent musicians, so you can’t pay us off. This is gonna be a real fight.

Quinn: I just want you to know that there is definitely not a number that you can definitely pay us off with. You definitely shouldn’t text me after you hear this.

Q: So if you guys were to open Saturday Night Live, which I heard you mentioned, who would you want the host to be?

Max: He’d bring his brother and it would be a nightmare.

Quinn: You know, probably any one of the Muppets. Just because I want to hear them do the Muppet Show theme song probably. I’ve just always wanted to see that live. It’s been stuck in my head.

Miles: I’d say give me Kermit.

Quinn: It’s been stuck in my head for like 15 years. And so I’d say, any chance I got to see them live. If I had three wishes. I would wish for like, to see the muppets play live, for me to be in the front row, and then to give Kermit a hug.

Max: I just wanna see their legs. I have never seen their legs

Coop: Quinn, I don’t know if you want me to break this to you. But the Muppets aren’t real, bro. I’m sorry.

Quinn: You fool. Haven’t you seen the show? You see them talk!

Max: Yeah, I’m down with the Muppets. Yeah, cuz then we could have them like collab, we could get Miss Piggy on a song.

Q: I mean, that almost answered the next question, which is what is next for you guys?

Max: I mean, yeah. What’s next for us is we actually bought a couple of timeshares down in Tallahassee.

Quinn: And we were wondering if anybody was interested, we have this really great way for you to make a lot of money. It’s, what it is, is a reverse funnel.

Miles: All it takes is two friends. I’m sure everyone here has two different friends that they can get.

Max: It’s all there in the chart.

Quinn: The more people you get, you can go down there and you’d basically be paid vacation if you sell enough days. I mean, theoretically, you can get there. Give us a call guys. Seriously. It’s a great system.

Max: Also, we have a record coming out. So the record is due to be out late July and it is called Never Change, Or Do, which is a Community quote because we love Community, but also we like to have fun, very obviously. And we’re also a funk band. And there are six songs on it, each of them features a different guest; instrumentalists or vocalists. They’re all awesome and bring their own flavor to it. We should have a single out here for you in about a month. We’re also going on tour this summer but that’s neither here nor there. The most important part is that the album cover for Never Change Or do features that young Quinn Cosgrove with his pants fully down. You only see cheek.

Max: We show it, but it’s tasteful.

Quinn: A little je ne sais quoi If you will, yeah. As the French say,