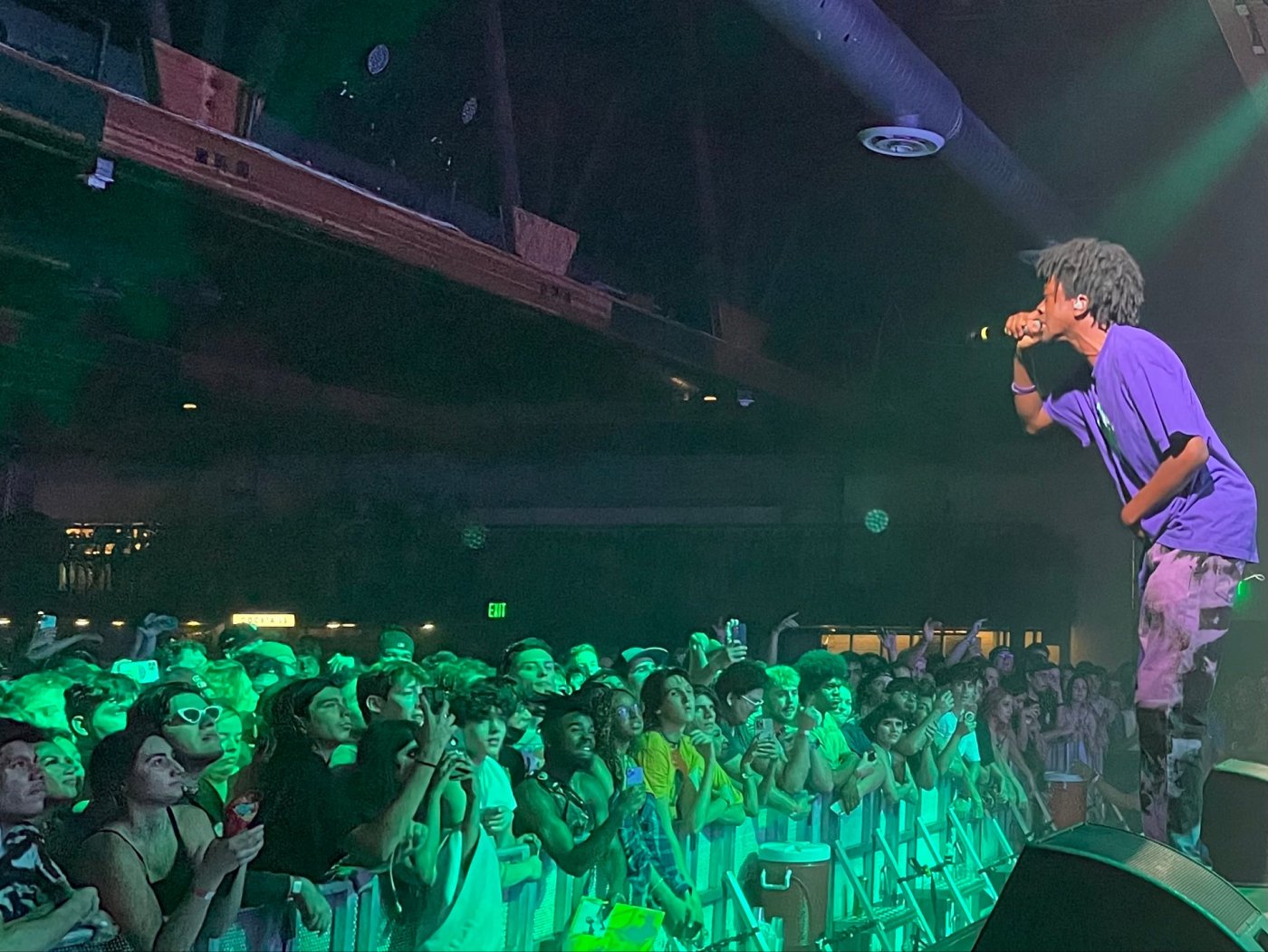 Artist redveil on stage in front of a crowd at the Van Buren event venue in Phoenix.

Only my second time in Phoenix and I thought it couldn’t get any hotter, but man was I wrong. Denzel Curry, redveil, PlayThatBoiZay, and the rest of their crew cranked up the heat with their last show of the tour. Spitting fire throughout the night, the artists kept the crowd pumped and sweaty. Both Denzel and redveil were able to cool everyone off with a few smooth flows from their discography, including Denzel’s “Mental” and redveil’s “mars”. Even with those chill tracks I was still drenched with sweat by the end of the show…and I wasn’t even in the mosh pit!

The venue did a great job getting water to those who needed it (which was about everybody) and quickly gave service to those who went a little too hard and passed out. The staff worked very hard to help the artists put on a great show and keep everybody safe. A larger Granada (for the Lawrence people) with an old western vibe, the Van Buren was a great venue to host the show. It can hold about 2,000 people and it needed every bit of space, as the show sold out weeks in advance. Unfortunately for any shorties in the back, the venue doesn’t provide much leveled viewing so if you’re in line for the next show, make sure to get there early! It does have a balcony similar to the Granada, however it is VIP only. The artists didn’t use much of a stage design besides a video screen in the back, which worked just fine as the artists kept the crowd going by jumping around the stage. However, I was a little surprised there wasn’t anything extra after noticing Denzel’s X-Wing at Coachella (unfortunately only through my Twitter feed).

For my first time seeing these artists in person, they did a fantastic job spreading the energy throughout the venue and connecting with the audience. As the last stop on the tour, you could feel the artists were ready to go hard one last time. The first co-openers, OnlyOneTwo and Deniro Farrar, did a great job getting the crowd pumped for the rest of the show. I didn’t think the crowd was going to get any more up, but PlayThatBoiZay came out and got the moshpits started. The South Florida native got the crowd rowdy and hungry for the two final talents to come.

After PlayThatBoiZay’s set, I thought redveil was gonna come out and cool off the audience with a few smooth jazzy bars from his new album learn 2 swim. Instead, he kicked off bumpin’ to “Clench” from his 2020 album, Niagara. The crowd went crazy. Even though a lot of people didn’t know the words to his tracks, redveil was able to keep the audience engaged throughout his performance. I’m sure he gets annoyed by the constant mention of his age, so I’ll try not to focus on it here, but at just 18 years old, the Maryland native has written, produced, and rapped two separate, well put together albums; and he performed them just as well. Albeit they are a little raw, with a definite influence from members of Odd Future such as Earl Sweatshirt, but still very well put together projects. He has a bright future ahead of him so long as he stays on the grind. From when he first came on stage, redveil didn’t lose any of the crowd’s energy. Initially I thought that his songs were going to be a little too jazzy to keep the crowd hyped, but with some support by DJ Zelle, the two were able to keep the crowd going hard for almost an hour before the headliner, Denzel Curry, came on.

Starting off with the intro to his latest album, Melt My Eyez See Your Future, Zel set the mood for what was to come. His flow in “Melt Session #1” lost none of its entrancement from listening to it through my headphones to now hearing it live. He kept this atmosphere throughout the entire set, not only playing tracks from his new album, but also some bangers from old ones such as “This Life” from Imperial and “BLACK BALLOONS” from TABOO. Denzel kept the crowd going the entire time and made them feel like they were a part of the show with some good-hearted jarring.

The only thing I believe this concert lacked was a DJ in between the sets. House music was playing so it kept the audience happy, however I think that live mixing in between each artist would’ve put the concert over the top. Even without live DJing in between sets, each of the artists controlled the crowd’s attention and emotion throughout the entire show, which helped keep everyone alive and hyped up. I also have to give a shout out to the sound engineers, as they did a great job keeping both the music and the vocals at solid levels throughout the entire show. Overall, I had a great time at this concert and all of the artists delivered beyond my expectations. They have another tour starting in September and I can only hope they put Lawrence or Kansas City on their list!