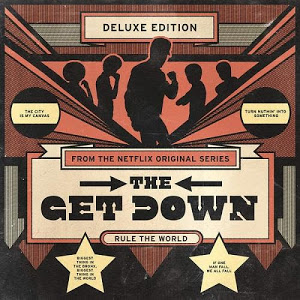 Various Artists: The Get Down: Original Soundtrack Earlier this year, Netflix put out an original drama titled The Get Down. It focused on the Bronx in the 1970’s during the birth of hip-hop. Naturally, it has an original soundtrack, given that 1) It’s a show about music, 2) It’s packing a huge budget of $120 million (!), and 3) One of the executive producers is Nasir Jones, aka Nas, aka the author of Illmatic, a rap album that is often considered one of the genre’s best. Fortunately, the soundtrack meets the same standards that Netflix sets for their shows.

The soundtrack spans 90 minutes and two discs, all the while boasting a collection of tracks old and new from a roster of familiar names. A good number of the tracks come from the cast members, including Jaden Smith, Herizen Guardiola, Justice Smith, and Nas himself. These tracks are serviceable for the most part, with Jaden dropping bars more aggressively than his dad Will ever did, and Guardiola bringing some pleasant and nostalgic soul vibes in tunes like “Set Me Free”. Where the soundtrack truly shines, however, is in the new songs from the guest artists. Miguel’s “Cadillac” takes his familiar but magnificent vocals and crosses into disco territory. Janelle Monae nails it out of the park with a cover of the Motown standard “Hum Along and Dance”.

In addition to original tunes, there are welcome additions from songs of the era, such as Lyn Collins’ “Think (About It)”, and Donna Summer’s “Bad Girls”. These older tracks help anchor the sense of setting we are supposed to get from the show and soundtrack: The Bronx, where even though there’s economic hardships going on, it’s still a creative renaissance in many musical scenes. Unfortunately, some songs on this album take away from that sense of setting by incorporating too much from our current era. For instance, The track “You Can’t Hide” featuring ZAYN (of One Direction fame) on vocals suffers greatly from a backing rhythm that sounds like new millennium R&B, not soul or disco of the 1970’s. It isn’t a problem in isolation from the rest of the album, but in a full listen it hurts the immersion factor.