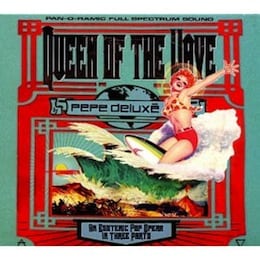 Pepe Deluxé: “Queen Of The Wave”

“Queen Of The Wave” is out there. Like, beyond the horizon and questionably real out there. It’s a pop-opera (popera) in three parts based on a novel and its sequel about Atlantis. It features an organ made using stacalites in a cave. It’s also a really fun listen, seriously one of the most interesting things I’ve ever experienced. I think a track by track breakdown works best in this case.

Track 1: An intro to the story, a time warp to the setting. Garage rock minimalism, heavy bass and drum, flutes also wander in and out.
Track 2: Background of main villain. Starts out guitar heavy, tunes down a little when a soul/jazz singer comes in, morphs into vocal harmonies and bells, back to guitar at end
Track 3: About main hero. Fluctuates between really poppy t.v. show sound and 60’s girl band, opera like near the end, back to pop
Track 4: Temple of occult magic user. Full of synths trading melodies, really straightforward
Track 5: Origins of Atlantis. Celtic sounding folk music, synths come in later with melodies, drum breakdown halfway through.
Track 6: Trial of main hero. Reminiscent of Nektar if they had a female lead singer. Very prog rock like.
Track 7: Dire prophecy. Prog rock with flute in beginning, transforms into spoken word with piano and bass.
Track 8: Interlude. Composition for Stalacpipe organ, biggest instrument in world.
Track 9: Hero is seduced by barbarian queen. Reflected in music, rockfish with strong female lead vocals.
Track 10: Hero is in the afterlife. Very hymnal like, features organ that dominates the sound later on. Sounds like a lullaby at end, very cool.
Track 11: Atlantis is wiped out. Imagine Ride of the Valkyries filtered through prog rock, tense
Track12: Voyage of survivors. Narrative and fairly typical rock.

RIYL: I don’t even know, man