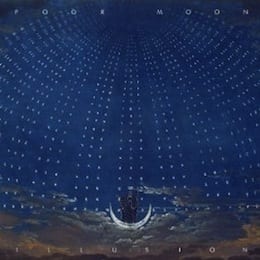 Nice collaboration between Fleet Foxes and the Christmas Cards.

First thing you’re going to ask yourself when you hear this album is, “Am I listening to Fleet Foxes?” And you may question your ears and sanity but, the answer is, you’re right and you’re wrong. The band is composed of Christian Wargo, Casey Wescott ( both from Fleet Foxes), and Ian and Peter Murray (the Christmas Cards). Starting as a long distance record between the brothers Murray while they were on tour with Fleet Foxes, the album seems heavily reminiscent of Fleet Foxes but with a slight difference. Illusion is a deeper, darker sound, similar to the sound of ocean water, and pensive. The songs range from slow acoustic to ’60s folk and surf. The ’60s folk definitely comes from the Murray brothers as they come from the San Francisco Bay area, which helps break it away from that complete Fleet Foxes feel, keeping it fresh. Clean guitar, xylophone, and rolling drums fill the album to the brim, allowing all the songs to mix together in a pleasant way and takes you on a journey through the night.

RIYL: Fleet Foxes, Tennis, early ’60s Folk, Bay Surf, Being Outside at Night Near the Ocean.