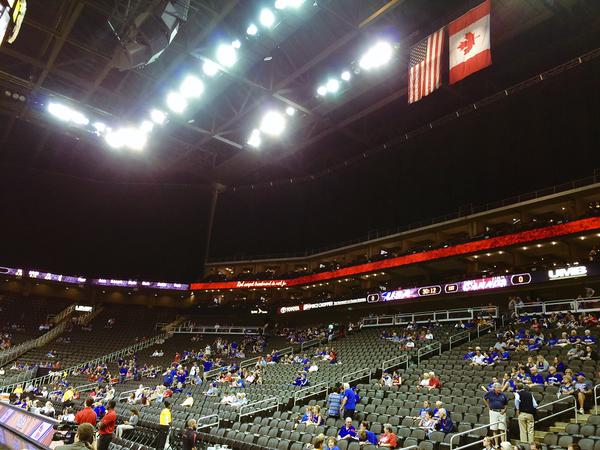 The United States was once again well-represented as Kansas defeated Team Canada for the second time in two days by a score 87-76.

In many ways, the Tuesday and Friday games were the same — Kansas would allow Canada to go on a few runs and build a comfortable lead before claiming the biggest run of the game for itself and coming away with the victory.

“We have a tradition of doing that at Kansas,” said Max Falkenstien, the legendary Kansas broadcaster who sat on the bench as an assistant for Friday night’s game. “We’re great finishers, good game tonight,” he added.

It was Hunter Mickelson who provided the spark and fueled the run that lifted Kansas out of a ten-point hole. With just over nine minutes to play in the game, Mickelson ripped down a big rebound and scored with a lay-up on the other end. Within the next minute, Mickelson drained a free throw and secured two extra possessions for Kansas with a steal and a block. “Coach stressed putting more energy into the game during halftime and I just tried to do that when I was out there,” Mickelson said, “I just got some breaks and made the best of them.”

Wayne Selden was the MVP of the night for Team USA. His 22 points and 10 rebounds led all other players and he completed his stat line with 3 assists and a steal. “We knew coming in that he was going to be a load and he was tough on the glass as well,” Canada Head Coach Barnaby Craddock said, “he’s a big, physical guy and he’s going to have a great year next year.”

Going forward, depth is a concern for Team USA and Head Coach Bill Self. In the second exhibition game, Canada’s bench outscored America’s reserves 48-19 and dominated when Kansas starters were off the floor. “If you take Perry out of our frontcourt we don’t have a lot of scoring so that could certainly be a concern,” Kansas Head Coach Bill Self said, “I want to go play well over there and certainly win but the biggest thing about doing this is helping prepare guys for next year.”

Team USA departs for South Korea on Sunday and will play a third exhibition game on July 2 against China before beginning pool play with a game against Turkey on July 3. The team will play a total of six games in one week before beginning bracket play on July 10 with the team ultimately returning stateside by mid-July. You can follow @SamDavisKU and @KJHKsports on Twitter for updates and information throughout the coming weeks.