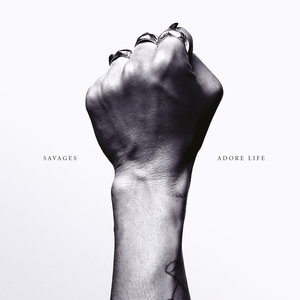 The London-based post-punk outfit, Savages, burst upon the scene in 2012, and soon after released Silence Yourself, an excellent album that matched the energy and intensity their live performances oozed of. The band stayed active, but under the radar, in 2014 with Words To The Blind, a 37 minute track that is quite the expedition, with more lyrical ambitions and a mix of prog and psychedelic influence. Now, Savages have released Adore Life, and it draws from both of their previous works to create a more emotional, but less catchy or intense experience.

Adore Life keeps in the direction of Words To the Blind with more dynamics in the song structures, and also in the lyrical content. At some points, the pace of the music is faster than anything they’ve done before, like in “The Answer.” At the same time, they are not afraid to go more slowly and calmly in the appropriately titled “Slowing Down the World.” Lyrically, the songs implore the listener more than before to think about and analyze the message. Unlike in Silence Yourself, Adore Life doesn’t opt for the repetitive choruses nearly as much, instead relying on singer Jenny Beth’s prose. To some extent this works well, because most of the songs relay a common theme of love. Whether that is loving people (See: “Sad Person”), or loving life (See: “Adore”), it’s easily relatable, and encourages some inner-reflection at the same time.

At the same time, the repetition of lyrics from Silence Yourself is missed. Comparing the two albums, you’ll more likely find yourself wanting to chant “She will, she will” and “Don’t let those f*ckers get you down,” lyrics from Silence Yourself, more than anything from Adore Life. Perhaps it’s because they are said with more authority, or perhaps it’s a reflection of Silence Yourself‘s higher sustained energy throughout that make it the one you will more likely come back to. Adore Life gets close to that at points, particularly with “T.I.W.Y.G,” but the album will be more likely remembered for trying to make a more of an artistic statement, than for its raw power. On that front, it succeeds, while retaining most of what attracted people to the band in the first place. That being their driving bass lines, strong lyrical messages, and powerful live presence. Thankfully, Lawrence will have an opportunity to feel that live presence on April 9 at The Granada!

Recommended If You Like: Siouxsie and The Banshees, Gang of Four, Wire, Iceage