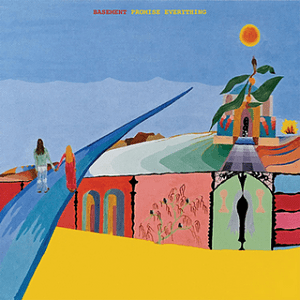 Basement is a melodic hardcore/emo/grunge band from Ipswich, Suffolk, England. Promise Everything is its first album in four years after going on hiatus in 2012. Basement are one of many bands who seem to be focusing their sound on the intersection of emo, melodic hardcore and ’90s grunge. Compared to other bands with this sound, like Balance and Composure and Superheaven, Basement has a considerably more produced and cleaner sound on Promise Everything.

Even compared to Colourmeinkindess, Promise Everything sounds like a band who is going for more mainstream exposure—so much so that one might describe the majority of this album simply as alternative rock. This certainly has its downsides. For one, the edginess (or at least, the semblance of) they had on Colourmeinkindness is gone. Second, the Nirvana-isms are a bit more Nirvana-er. Kurt Cobain guitar riffs that were reused by second tier grunge and post-grunge bands in the mid-late ’90s, but yet are reused on this album. The main guitar riff in “Submission” is a particularly egregious example of this.

For me the saving grace is the guitarists’ chord voicings. The guitarists choose to forego standard chords in order to make things more tonally and melodically interesting. Rhythmically, the songs are straightforward and leave a lot to be desired in terms of dynamics.

Besides the interesting guitar voicings, most of the songs sound fairly derivative and unchallenging to the listener. Perhaps that’s the point: going for the mundanity of popular alternative rock radio. Overall, bands like Balance and Composure and Citizen do a lot better job playing this style and provide a much more interesting listening experience.

Recommended If You Like: Citizen, Turnover, Daylight, Superheaven, Balance and Composure