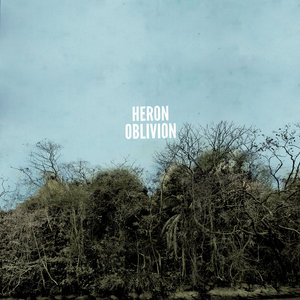 From a first listen, Heron Oblivion’s self titled debut gives a sense of deja-vu in some ways. Not because the album is derivative or because it’s a re-hash of something done before, but instead it captures the essence of late ’60 and ’70s psychedelic rock: an era best remembered for it’s superstars, sexual freedom, and liberal drug use. Listening to Heron Oblivion certainly cause a baby boomer to reminisce over those times.

The part of the album that contributes most to this vibe is certainly the guitar licks. Noel Von Harmonson and Charlie Saufley alternate wonderfully between two familiar styles: the first a melodic lead that seems seems to want to drift into a solo, but sticks to just being a hook (heard in the opener “Beneath Fields,” which sets the album tone nicely).

The second is screechy and noisy, but gives the album a needed change of dynamism, as seen in “Oriar.” This guitar work defines the album’s sound and timbre by giving a rush of pleasant nostalgia. That is not to say that the other components don’t contribute well. On the contrary, vocalist and drummer Meg Baird brings a lot to the table as well. Although her vocals are often hushed in the record and hard to decipher, it’s a welcome and vibrant addition to the mix. This is combined with a usually slow song tempo, and sometimes dark songwriting. The result of Heron Oblivion is a good one: an album that successfully throws it back to a well-regarded era of music.

Recommended If You Like: Six Organs of Admittance, Jefferson Airplane, The Black Angels