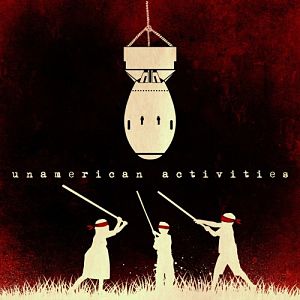 Thematically, unamerican activities seems to be split in half. On side A, the songs are more socially and politically focused with “I Got a Gun,” and “You Don’t Speak For Me”, while side B has songs that center around relationships such as “I Want You,” and “She Doesn’t Need Your Love.”

Musically speaking, there are plenty of new ideas on this album. This doesn’t really matter, because unamerican activities is just a great collection of infectious and solidly-written punk rock songs. The guitars are especially impressive, maintaining the heavy usage of power chords in punk rock while at the same time adding bluesy licks and riffs. Despite having the aggressive tempos and distorted guitars, the choruses are often catchy and melodic.

Since all four members are credited with doing vocals, it is a little difficult to determine which member is singing on what song. However, the vocals on “You Don’t Speak for Me” and “I Got a Gun” sound more than a little reminiscent of the throaty barks of Glenn Danzig and Ian Mackaye. “Punch the Clock” is one of the few slower songs on the album with a clear nod towards The Doors in both the music and vocal delivery. Red Kate is another excellent exhibition of the great punk rock coming out of the Kansas City and Lawrence areas recently.

Recommended If You Like: Misfits, Eddie And The Hot Rods, The Stranglers, Dr. Feelgood, The Clash, The Sex Pistols