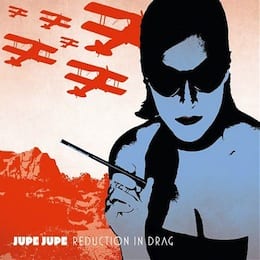 Seattle-based music gets dark…but in a good way.If you think “Dance Music For The Depressed” is a descriptor that could never be used, you haven’t heard of Jupe Jupe. A quartet out of Seattle, Jupe Jupe intends to keep your head nodding with hooks that move you on both a physical and emotional level. The album has a prevailing dark and brooding tone, with lyrics commenting on everything from typical band thoroughfare (breakups/girls in general) to reflections on religion. The darkness can approach unbearable levels at time, track seven, “The Fire Curtain” being a good example, which is basically a five minute long lullaby that seems to come straight out of the “Nightmare Before Christmas” universe. This song finds its counterpart in the similarly orchestral, but less dark, final track “The Raincoats of Cherbourg.” This six-minute instrumental provides a break from the gloom of the previous songs and allows you to ingest what you’ve been hearing over the past half hour.

Give this album a listen if you’re a fan of The Handsome Furs or The Killers. It’s eerie how well “El Topo” could fit on The Killers “Day and Age” album. Stay away if you’re looking for an upbeat pop album. Jupe Jupe is a band that knows their music well, and they say it best in “El Topo”, “Glamorous, can you handle us? We’re so dangerous, how could you look away?”
Reviewed by: Brendan Higginbottom 25 September 2011
RIYL: The Handsome Furs, The Killers, Dark Pop/Glam Rock
Recommended Tracks: 5, 6, 9, 10
FCC Warning: None
Label: Jupe Jupe Music
Release Date: 1 November 2011