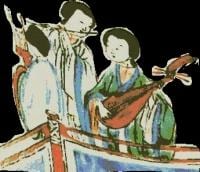 Classifying the genre of world music

How to define the broad genre of world music

The month of October brought a cultural twist to Ambient Transience.  I dedicated three shows to various factions of “world” music.  To me, the term is vague and somewhat offensive; in general, it signifies musical themes from non-western cultures, eliciting sounds distinct from what we would typically hear in the West.  World music is infinitely broad; its strange to me that Chinese folk music can be considered in the same genre as African Mbira music, but so is the Western process of definition and categorization.

Granted, each show possessed only a small taste of each culturally distinct genre, and it was necessary for me to lump together regions and ethnicities that are completely opposite to each other.

I chose an Asian theme for my first show in October; the majority of the music came from Japan with such influential ambient artists as Tetsu Inoue with Ambient Otaku, and Yukari fresh.  Some Chinese choices included Monolake, Liu Fang; Chinese ambient draws on traditional Folk music while incorporating contemporary trends in electronic sounds.

The following show brought songs from Africa. Again, my two-hour time slot did not allow for an extreme clarification of the various genres existing in the diverse continent.  From northern Africa came distinct Islamic influences, for the region is dominated by the religion; Orchestre Du Jardin Du Guinee and Ali Farka Toure exhibit stylistic tendencies out of MENA (Middle East and North Africa).  Mbira, out of Nigeria and Kenya, utilizes the finger piano to create distinctive rhythm in the music.  Thomas Mapfumo and Toto Bona Lakua are among the many that represent this musical variety.

The following week brought music from my favorite region: Latin America.  Both Central and South America incorporate a vast array of people, cultures, languages, and musical types.  I used indigenous folk songs from Atahualpa Yupanqui with incredible wind instruments, and looked at the Brazilian band Os Mutantes which greatly influenced the American Progressive Rock movement.  Another theme I touched on was Nueva Cancion where various musicians produced songs of peaceful protest against the tyrannical regimes of the 1960s and 1970s.

Although I’ve never set foot in Asia, Africa or South America, researching the musical genres from these regions has greatly intrigued me.  One day, I hope to explore such diverse and interesting regions in order to create my own definition of “World” music.