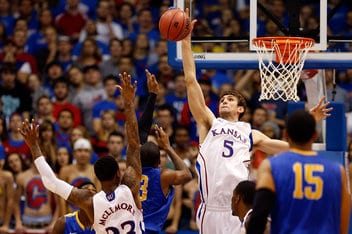 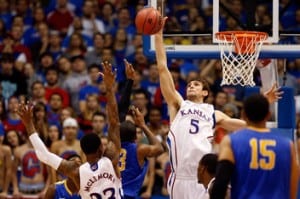 A triple-double is a rarity in basketball and even more rare at the University of Kansas. But last night in Allen Fieldhouse, senior center Jeff Withey recorded the second triple-double in the school’s prestigious history.

Withey finished the night with 16 points, 12 rebounds and a school record 12 blocks. Withey’s triple-double joins former Jayhawk center Cole Aldrich as the only two Jayhawks to record a triple-double.

“I’ve been wanting that for a while now. It’s only me and Cole that have it, so it’s pretty special to me,” Withey said.

Kansas coach Bill Self said Withey was by far the best performer on the court last night as the Jayhawks saw their 60-36 lead dwindle to just a 70-57 victory.

“I thought he played really well. He’s scoring the ball better. That’s not what his forte is obviously. His forte is blocking shots, but he was the only one down there really competing,” Self said. “We didn’t have any competitive juices out of our big guys tonight.”

The lack of juices Self described were evident as the game kept on ticking. The No. 10 Jayhawks shot just 43.3 percent on the game and had stretches where they took nothing but jump shots and not forcing it inside.

“Our offense was just- I mean I’ve seen bad offense before, third and fourth grade YMCA basketball with no good ball reversal and bad handling- our offense surpassed that tonight the last 12 minutes of the game,” Self said. “Good thing we got up 24, but to let a team in our building go on a 16-0 run in the second half when you have a chance to knock them out and let them go on a 7-0 run when you could have knocked them out in the first half coming out of a time out is very discouraging.”

The Spartan run in the second half was sparked by senior guard James Kinney. Kinney caught fire in the half as he went 7-of-16 for 19 of his 30 points.

“He was all over the place. It wasn’t a single-man task. I really didn’t get a chance to be on him the whole game, so he got his chance with everybody out there,” senior guard Travis Releford said. “We just got to do a better job at communicating as guards and just go from there.”

Self wasn’t as pleased with how the Jayhawks played especially with Kinney dropping 30 points in Allen Fieldhouse.

“We’re playing at home and we don’t do anything to create havoc at home in front of 16,300 the first 10 minutes of the game. It blows my mind. I don’t know if we can get guys with that passion to buy into playing a certain way like Kansas teams have always played in the past,” Self said. “I could care less about whether or not we make shots, but the mindset of letting a kid come in here and get 30 on you in our building. He’s a good player, don’t get me wrong, but that’s not Kevin Durant out there. To let the dude come in and get 30 in our building and like it, to me, is totally inexcusable.”

Even though the win was rough, it all went back to the 7-footer Withey and his performance. His performance was worth watching, even from other teammates.

“Most of the time, and I’m guilty of it too, we got caught standing around watching Jeff like a fan,” Johnson said. “There was a lot of times where I caught myself looking at him like I wasn’t a part of the game and it’s something that shouldn’t be happening with the seniors or anybody on the court. I feel like we have to help Jeff, because he’s doing a lot out there and it’s heavy load on him.”