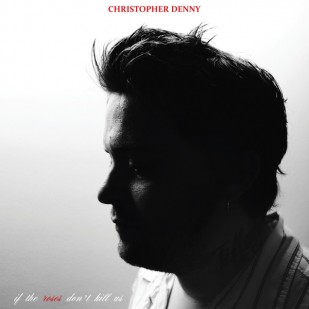 Christopher Denny – If the Roses Don’t Kill Us

The first thing you notice about this album is Denny’s voice, which sounds completely out-of-time. It’s adrogynous, warbly, sensitive, twangy, and is his strongest asset. Some have likened it to Roy Orbison, and there’s some truth to that comparison, but Denny is also a singer well-versed in the phrasing and timing of traditional country music’s greatest singers. This is most obvious on the stirring ballad “Wings,” that features some weepy pedal steel, an essential feature of any great country ballad. Denny is not merely paying homage to his predecessors, however. His voice may recall a bygone era, but this album sounds thoroughly modern. It’s a delicate balance to achieve, and Denny’s expertly crafted songs are never merely paying tribute, but rather, giving a jolt to the sometimes stagnant genre of alt-country music. “Million Little Thoughts,” with it’s understated organ, piano, and slide guitar is an absolute stunner. It really floored me when I heard it. One thing that really stands out about this album is the quality of the sidemen (and women) who accompany Denny. Every organ flourish, horn burst, cymbal crash, piano break, and guitar solo is perfectly timed and never gets in the way. “Our Kind of Love” is a great example of this. The electric guitar, pedal steel, and horns are so subtle that they might get lost, but then they peek out at exactly the right time. Each musician gets a little time to breathe, never overstaying their welcome and exiting at precisely the right moment. “If the Roses Don’t Kill Us” is another standout, with its New Orleans barrelhouse piano and jazzy horns. My favorite songs are the sad and lonely ones, but Denny and his musicians aren’t scared to play some rock n’ roll or to ramp up into a gospel fervor, such as on “Love is a Code Word,” and “Some Things” which strut along like lost Rolling Stones songs circa, “Exile on Main Street.” This is a really remarkable album. Even people who claim to hate anything twangy should find something they’ll like on this one. What Denny is doing is exciting for American roots music. He’s pointing the path forward. We’ll see who follows his lead.