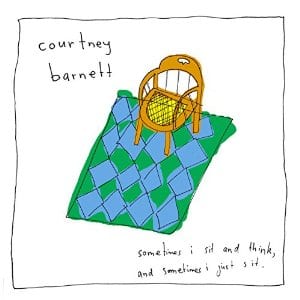 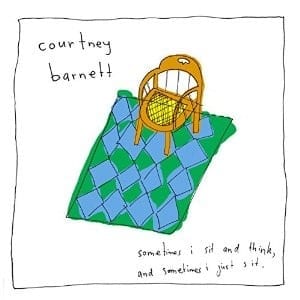 Australian singer-songwriter Courtney Barnett’s Sometimes I Sit is her first full length following a string of EPs extending back to 2011, and thus benefits from both the freshness of a debut release and the more developed sound of an artist who has made their rounds. The best way I can think to describe this album’s style is roots rock soaked in grunge and left out to dry with deadpan vocals and a lackadaisical tone. It’s very fun and I wholeheartedly recommend that you give it a listen.

Lots of the tracks on this album remind me of the more energetic sounds of Angel Olsen’s 2014 release Burn Your Fire for No Witness, especially songs like Pedestrian at Best (2), Aqua Profanda! (6), and Debbie Downer (9), which all pack a lighthearted punch. There are also slower, stumbling songs like Depreston (5) and Small Poppies (4), which is my favorite track on the album, though maybe not the most radio friendly at seven minutes long.

While certainly nothing groundbreaking, Sometimes I Sit has enough universal allure that it doesn’t really need to be. And while I’m not really sure if open chords ever truly went out of style, artists like Courtney Barnett are undeniably helping make them cool again.

Recommended If You Like: Angel Olsen, Parquet Courts, Speedy Ortiz, Waxahatchee
Recommended Tracks: 2 (Pedestrian at Best), 9 (Debbie Downer), 4 (Small Poppies), 6 (Aqua Profonda!), 8 (Nobody Really Cares If You Don’t Go to the Party)
Do Not Play: 7 (Dead Fox)
Written by John McCain on 04/01/2015